This is not a writing about a literal bird in a cage; that would be lame, unimportant, and most likely unworthy of being published. What I write today is the story of one of the single most important teaching moments that contributed to my development as a pastor. It all began with regular visitation to a shut-in, whose name is Will. He had suffered a horrible stroke which left him with very little motor function, a few words (most of which were hardly understandable), no independence, and no real ability to care for himself with even the most basic of tasks. 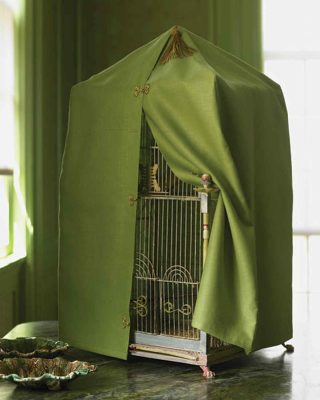 I always enjoyed our visits, though you can imagine I did most of the talking. He would respond at times with head nods. His communication was sparse, but anyone could tell he loved hymns, especially A Mighty Fortress.  I memorized it just so that I could sing it with him. He always would try to mumble along with the words. Singing was one of the few things that I saw made him happy. Two others were reading God’s Word and his faithful wife. Living for him was an everyday struggle that I would soon come to understand just a little better.

There are memories we have which are so impressionable they have lasting impacts. I remember finishing a devotion, which I believe had concluded with the sure hope of the resurrection and the new creation. I loved to remind him that what he saw was not the end. After praying I looked up to see these huge tears begin to well in Will’s eyes. He didn’t have the strength or the coordination to wipe them, so a stream flowed from his eyes through the stubble on his chin and landed on the drool towel across his chest. Ingrained in my mind forever is what happened next. I leaned in closer to ask, “What’s wrong Will,” but before I could get my words out, with every bit of his energy, clear as day, he said, “I feel like a bird trapped in a cage.”

Time seemed to be held still at that moment. I took hold of his hand and gave it a firm squeeze. I held it for some time as we cried mourning the sad effects of sin in this world. I know the Lord had looked down in mercy and granted him this moment so that I might share in his suffering. Will was waiting for Christ with greater hope than I can express to you in words. His cross to bear in this life was heavy and I could not remove it from him, but I could continue blessing him with Christ, the one who could give Will the grace to endure his suffering until it was removed.

I share his words with you because hearing him say that forever changed the way I would speak to those with mental disabilities and physical handicaps. In those few words, everything I saw on the outside which was broken and dysfunctional disappeared and I caught the glimpse of the bird fluttering inside the cage. I had always seen the cage, but it was not always known to me that bird inside received the words and the songs I spoke and sang. He understood more than I had given him credit because of his outward appearance.

There is a tendency for us to judge one’s understanding by simply looking at their outward abilities to function and communicate. The outward state of the body is not always equal to the cognitive function and intelligence held within the body. Responses are not always indicators of reception. When handling the Word of God this is especially true. Sometimes the brain can no longer communicate to the body, though it is completely aware of what is happening. Actions and words sent by the brain can be lost or jumbled around by the time they reach where they destined to be going.

Not one moment spent reading the Bible to him, singing hymns, or preaching was a moment wasted. He needed the message of comfort and hope that the Scriptures declare. All was not lost for him; he would not always be a bird stuck in a cage. The Lord used Will to humble me and cast down my foolish reason. Pastoral visitation has become very important to me. Each day forward I began to proclaim the Gospel of salvation without fear that it was doing nothing. I knew it was. First and foremost it accomplishes what God intends because God says that it will not return to him void (Isaiah 55:11). It was the living and active word of God piercing through the dying flesh and giving life to the soul. Second, Will gave me a window into a life I could never understand, further teaching me the importance of the resurrection for those who are suffering.

Can you imagine how important the day of the resurrection of all flesh is for Will? Every time I had told him about the moment that Saint Paul describes in 1 Corinthians 15, he must have been filled with comfort and joy. Saint Paul writes by inspiration of the Spirit:

“We shall not all sleep, but we shall all be changed, in a moment, in the twinkling of an eye, at the last trumpet. For the trumpet will sound, and the dead will be raised imperishable, and we shall be changed. For this perishable body must put on the

The sting of death is sin, and the power of sin is the law. But thanks be to God, who gives us the victory through our Lord Jesus Christ.

Oh how much he longs to hear the trumpet blast. It shall not catch him off guard as it will some people. The Lord has released him of all fear in judgment because the Lord is his salvation. Many may run in hopes of escape, but he will wait patiently on the Lord for his day has come, his redemption has drawn near. All the patience and comfort of Scripture which had brought him an abundance of hope and joy will have finally come to its end, as he enters into ceaseless joy with the saints and the Lamb. He will share in the inheritance of the saints who meet their blessed end. Sin and the body of sin that once held him captive will no longer be his cage. At that moment, in the twinkling of an eye, he will be liberated, not from the flesh, but from the corruption of the body. He shall be made new – pure, righteous, and blameless before the Lord without sin and a body of sin (1 John 3:2; Job 19:24-27; 1 Corinthians 13:12).

God gives us hope beyond what we may see in this life. Don’t stop proclaiming the Gospel or taking the time to visit the people who may be completely unresponsive to your words and hymns. Sure it may be difficult. Some people may know you when you walk in and forget you by the time you leave. Some people may never say a word. Some people may be even too tired to open their eyes, but do not stop. Speak to them as Christ would speak to them. His words can open the eyes of the blind, lose the tongue of the mute, and open the ears of the deaf. God’s words pierce through the dying flesh and liberate the prisoner held by sin. Bring to each and every ailing person the balm of Christ’s love in the forgiveness of their sins so that on the day of His coming they too may rejoice as they see their redemption drawing near.