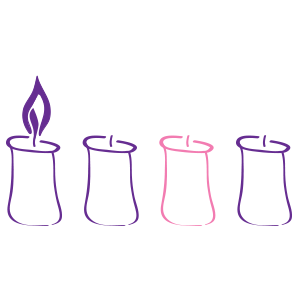 And the multitudes that went before, and that followed, cried, saying, Hosanna to the Son of David: Blessed is he that cometh in the name of the Lord; Hosanna in the highest. And when he was come into Jerusalem, all the city was stirred up, saying, Who is this?

This was not the first time Jesus had stirred up all Jerusalem. After his birth, the magi had come to Jerusalem “saying, Where is he that is born King of the Jews? When Herod the king had heard these things, he was stirred up, and all Jerusalem with him” (Mt 2:2–3).

The parallels are striking.  In both cases people call Jesus “King” or “Son of David,” a royal title. In both cases praise and rejoicing comes from the unlikeliest of people: Gentile magi and then the little children out of whose mouth the Lord established praise. In both cases innocent blood is spilled by jealous rulers—when Herod murdered the baby boys and when the Sanhedrin and Pilate conspired to crucify Christ.

How fitting that the end of Christ’s life of humiliation should be as the beginning, for this is what He came to do, to lay down his life in humility. He did not come as a warchief to rally the tribes and win for himself the glories and service of men, but as a lowly servant he laid aside the glory of God to serve and to give his life as a ransom for the many. He did not come to seek the influence of the mighty but to seek and to save that which was lost. He did not come scolding but teaching the Word of God in truth and meekness.

“Who is this?” the crowd asked. “Behold, thy King cometh unto thee!” shouts the ancient bard. This is what the prophets would have you know—not only that he comes but who he is that comes. He is your king who reigns from the cross.  And if he is called “your king” then he must be for you, along with all his benefits and kingdom.

“Behold, thy King cometh unto thee! Righteous and having salvation is he, humble and mounted on a donkey, on a colt, the foal of a donkey” (Zech 9:9). His lowliness is not merely your example to follow (though it is that) but that which wins your salvation. That lowly obedience by which the almighty Son of God suffers death, even death upon a cross, for you.

It is meet and right that we begin Advent, that time of focused waiting for Christ’s final coming, at Palm Sunday. Why? Because before you grasp Christ as an example, you must first receive and apprehend Him as a gift and present given to you by God to be your own. The prophets would have you know not only that the king cometh, but that your king cometh. Before you imitate his humility, you must first grasp him as the one who humbled himself for your sake. This is what it means in our Epistle “to put on the Lord Jesus Christ.” It to wear and receive him first as the LORD OUR RIGHTEOUSNESS, and then, having received him through faith, to be stirred up by his example to live holy lives of love; to not think that you are still naked slaves to sin but to see that Christ has clothed you in his righteousness to walk according to his ways.

All writings of the prophets and apostles want to lead us to see who this King is, why He was given, how He was promised, and how all Scripture points to Him, as He Himself says, “If you believed Moses, you would believe Me; for he wrote of Me” (John 5 [:46]). Likewise: “Seek and search the Scriptures, for it is they that testify of Me” (John 5 [:39]).[1]

When the King came, all Jerusalem was stirred up to fear, anxiety, rebelliousness, and false expectations. It was not until Pentecost, when the house where the apostles were sitting was shaken up by the sound of a mighty rushing wind, that Jerusalem was finally stirred up to faith and rejoicing by the Holy Ghost. On that day, we read, “They that received his word with joy were baptized.” So it is for you. It is not enough to know that King Jesus came to Jerusalem, but you must know that he came to Jerusalem for you, to die on the cross for your sins and death. It is not just that the king comes, but that he comes to you and has clothed you with his Holy Baptismal gown that you may be his own.

The King has come, he comes even today through words, bread, and wine; and he shall come again. Be stirred up, you Baptized, but not as Jerusalem in fear. Do not fear to confess your sins and guilt. He is your King, and brings for you the very righteousness and salvation you require. Do not fear that your grief is too deep, your shame to gross, your worries too pressing. Repent. You need not wear these things, but put on the Lord Jesus Christ. Do not fear that your sins must rule over you or that your days are pointless and could never amount to anything, for the Father already loves you and has approved what you do in faith.

You, daughter of Zion, heed the words of the prophets, and rejoice. Rejoice even today. Even as you wrestle against the desires and despair of your flesh, be stirred up to joy. Did you know that the Scriptures exhort us to rejoice not 100 times or 200 times but in nearly 800 passages we are commanded, urged, and invited to rejoice? The king shall joy in thy strength, O LORD; and in thy salvation how greatly shall he rejoice! (Ps 21:1). Take up the joy of your King.  The Devil hates your Christian joy. He wants to rob you of it. But he cannot, for he is not your king. Wallow not in despair but joy. Heed the prophets. Go your way, eat the fat, and drink the sweet, and send portions unto them for whom nothing is prepared: for this day is holy unto our Lord: neither be ye sorry; for the joy of the LORD is your strength (Neh 8:10). Your sins do not exclude joy for Christ has paid for them. Death and grief cannot quench joy for they are liars and must give up their dead because Jesus came, Jesus comes, and Jesus lives.

Stir up your power, O Lord, and come. And as for you, O daughter of Zion, rejoice greatly, for the King cometh, and he is yours.