The Twenty First Sunday after Trinity

So Jesus came again to Cana of Galilee where He had made the water wine. And there was a certain nobleman whose son was sick at Capernaum.  When he heard that Jesus had come out of Judea into Galilee, he went to Him and implored Him to come down and heal his son, for he was at the point of death. Then Jesus said to him, “Unless you people see signs and wonders, you will by no means believe.” The nobleman said to Him, “Sir, come down before my child dies!” Jesus said to him, “Go your way; your son lives.” So the man believed the word that Jesus spoke to him, and he went his way.  And as he was now going down, his servants met him and told him, saying, “Your son lives!”  Then he inquired of them the hour when he got better. And they said to him, “Yesterday at the seventh hour the fever left him.”  So the father knew that it was at the same hour in which Jesus said to him, “Your son lives.” And he himself believed, and his whole household.  This again is the second sign Jesus did when He had come out of Judea into Galilee.  John 4:46-54

The first sign Jesus did was to change water into wine.  You can read about it in John chapter two.  Our Gospel Lesson for today describes the second sign Jesus did.  He gave life to a boy who was about to die.  Signs signify something.  God chooses both the signs and what they signify.  We don’t have the right to do so.

When we take it upon ourselves to choose the signs, we are trying to usurp God’s authority.  More than that – we are putting him on trial.  But God won’t cooperate.  He’s not a puppet that we get to manipulate.  When we tell God what he must do to prove himself to us, we are telling God that we are his boss.  He won’t tolerate that.  He’s the boss.  He chooses the sign and what it signifies. 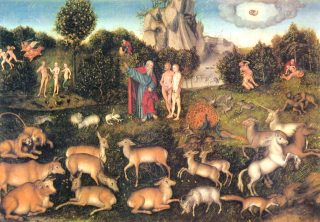 When he changed water into wine at a wedding celebration he signified that he approved of marriage.  In the beginning he made them male and female in his own image and he blessed them.  He established marriage in the beginning.  Four thousand years later God became a human being.  Thirty years later, the God-man did his first sign.  He reaffirmed his original blessing on humanity.  The reason God condemns fornication, adultery, homosexuality, and every other form of sexual perversion and immorality is because he blesses marriage.  The first sign Jesus did signifies that God still upholds, blesses, and sanctifies his institution of marriage.

His second sign signifies his power to give us life in the face of death and the power of his word.  The boy had a high fever.  He was at the point of death.  The man pleaded with Jesus to come to his house before the boy died.  The man knew Jesus could do a miracle.  He had heard of how he changed water into wine.  He knew Jesus could do the sign.  He assumed he knew what sign Jesus would do if he chose to heal his son.  He assumed that Jesus would come to his house.  How else could he heal him?

Jesus wants us to look beyond the sign to what it signifies.  Jesus didn’t need to go to the man’s house.  He didn’t need to lay his hands on the boy.  All he needed to do was to say the word.  The Word made flesh binds us to his word.  What Jesus says goes.  He says, “Go your way; your son lives.”  What happens?  At that very moment the fever left the boy.  Why?  Because Jesus said it.  Jesus saying it makes it so.  This is what this sign signifies to us.

The word sign is often translated miracle because Jesus’ signs are miracles.  In the case of changing water into wine, Jesus makes one thing into something else.  Jesus, by his word alone, changes sickness into health.  The signs Jesus did during his earthly ministry among us are quite impressive.  He healed people of many different kinds of sickness.  He walked on water.  He fed thousands of people with a few loaves of bread and a few fish.  He raised the dead.  He drove out demons.  All of these signs went outside of the so called laws of nature.

But the signs he does today are even greater.  All you can see is a man pouring water over someone’s head and speaking words.  But Jesus, who has all authority in heaven and on earth, is pouring out his Spirit, forgiving all sins, bringing life to replace death, and opening heaven to the one who receives this washing in faith.  The sign of water seals that which it signifies: the washing of regeneration and renewing of the Holy Spirit.  The washing with water by the word has the power, the authority, of the word behind it.  This is why we believe that a little baby who cannot yet talk can be born from above in Holy Baptism.

The body and blood of Jesus were offered up to God on Calvary to appease his wrath against sinners and to wash away our sin.  That sacrifice was offered up once and for all.  As the Bible says:

But this Man, after He had offered one sacrifice for sins forever, sat down at the right hand of God, from that time waiting till His enemies are made His footstool.  For by one offering He has perfected forever those who are being sanctified.  But the Holy Spirit says, “Their sins and their lawless deeds I will remember no more.”  Now where there is remission of these, there is no longer an offering for sin. Hebrews 10:11-18

There can be no more offering for sin.  That took place on the cross.  There is no sacrifice of Christ’s body and blood in the Lord’s Supper.  But the body and the blood are there.  They are there as surely as they were on the cross.  As surely as Jesus died for our sin and took them away when he suffered and died on the cross, so surely Jesus gives us forgiveness of sins here and now when he gives us his body to eat and to drink.  How do we know?  He said so.

Jesus says, “He that believes and is baptized shall be saved.”  Jesus says, “Take eat, this is my body, given for you; drink of it all of you, this cup is the New Testament in my blood, shed for you and for many for the remission of sins.”  Jesus says it.  That makes it so.  Jesus said, “Your son lives.”  The man learned later that the fever left his son as soon as Jesus said, “Your son lives.”  This confirmed the man in his faith and led his entire family to faith.  God’s word does what it promises every time without fail.  As soon as God says it, it is so.

The nobleman was a man with authority.  But he had no authority over sickness and death.  When we suffer pains in our body, bad health, and must confront the untimely death of a loved one, it is easy to question God.  We ask why?  We might get angry with God.  We might come up with a theory as to why he let it happen.  Whatever we do, we do in weakness.

Being weak might seem like a terrible disadvantage.  Just look at this nobleman.  We don’t know if he was Jew or Gentile.  It doesn’t matter.  We don’t know exactly what brought the fever about.  It doesn’t matter.  We know that this man was used to telling people what to do and seeing it done.  We know that this man thought he knew how Jesus needed to get it done.  And we know how helpless he was when his only hope for help refused to help him in the way he wanted him to.  Jesus ignored his request to go to his home.  Going to his home was the only way the boy would be healed and Jesus wouldn’t do it.  The man was weak and it was a terrible burden.

It was until it became a blessing.  Listen once more to the words of our text:

“Sir, come down before my child dies!” Jesus said to him, “Go your way; your son lives.” So the man believed the word that Jesus spoke to him, and he went his way.

This is our strength.  It is the word of Jesus.  Jesus directs the man’s faith to his word.  He won’t provide the sign the man wants from him.  Why not just do what the man asks?  Why not come down to his house?  Because if God is to be gracious to us, it must be on his terms, not ours.  If we decide how he must help then we are in charge.  If we are in charge we are not trusting him.  Faith doesn’t demand anything but what the word promises.

“Your son lives.”  So we confess.  I believe in the resurrection of the body and the life everlasting.  I haven’t seen it.  God hasn’t shown it.  He directs us to the signs he has chosen and to the words he has attached to the signs he has chosen.  Whether it is our baptism where we were clothed with Christ and united to his death and resurrection, or it is the Lord’s Supper where we are regularly fed with the medicine of immortality, when we put our confidence in these sacraments we are putting our confidence in Christ.

What a blessing it is to learn it!  When I see my body fail, sickness overwhelm me, and life leaving my body, I will know with the certainty of faith that I will not die, but live forever in perfect bliss with my Savior in heaven.  How will I know?  Jesus said so.  As far as my faith is concerned, that settles it.