The Twentieth Sunday after Trinity

“The Wedding Feast of the King’s Son”

Jesus answered and spoke to them again by parables and said: “The kingdom of heaven is like a certain king who arranged a marriage for his son, and sent out his servants to call those who were invited to the wedding; and they were not willing to come. Again, he sent out other servants, saying, ‘Tell those who are invited, see, I have prepared my dinner; my oxen and fatted cattle are killed, and all things are ready. Come to the wedding.’ But they made light of it and went their ways, one to his own farm, another to his business. And the rest seized his servants, treated them spitefully, and killed them. But when the king heard about it, he was furious. And he sent out his armies, destroyed those murderers, and burned up their city. Then he said to his servants, The wedding is ready, but those who were invited were not worthy. Therefore go into the highways, and as many as you find, invite to the wedding.’ So those servants went out into the highways and gathered together all whom they found, both bad and good. And the wedding hall was filled with guests. But when the king came in to see the guests, he saw a man there who did not have on a wedding garment. So he said to him, ‘Friend, how did you come in here without a wedding garment?’ And he was speechless. Then the king said to the servants, ‘Bind him hand and foot, take him away, and cast him into outer darkness; there will be weeping and gnashing of teeth.’ For many are called, but few are chosen.”  Matthew 22:1-14 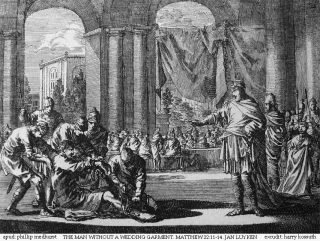 Jesus Christ married his Church.  Apart from him she is a homely bride.  Worse than homely, she is ugly.  No amount of makeup can make her pretty.  She is covered with sins.  Following her own desires and elevating her own feelings as the standard of right and wrong, she runs from one sin to another, always blaming others for her own mistakes.  She follows her heart and her heart is full of deceit (but she doesn’t know it and when told won’t admit it) so she keeps on following the path to ruin and misery.

Jesus is the heavenly bridegroom who comes to marry this homely bride, wash her clean of all her sins, and clothe her in his own righteousness.  By offering up his life for her on the cross, Jesus obtains for her the white robe of beauty and innocence with which he clothes her in Holy Baptism.

How do those he invites respond?  The polite ones ignore him.  “Thanks, but no thanks.  I’ve got a business to run.  I’ve got to make a living.  Thanks for the offer, but I have more important things to do.”  These folks feel no particular animosity against Christ, his gospel, and his church.  They just don’t care.  Live and let live.  “Go ahead and play church if you want.  It’s not for me.  I’ve got more important things to do on a Sunday morning than to go to church to listen to somebody preach to me.”  They won’t be bothered.  To them, the gospel is a bother.

Then there are those who aren’t so polite.  They become positively angry at the Christ and his claims and his church and persecute him.  They persecuted the prophets, stoning them to death.  They persecuted the apostles, hounding them to their execution.  They are still with us.  They become incensed when a Christian claims to know the truth about God, about his will for our behavior revealed in his law or his will for our salvation revealed in his gospel.  They are especially offended by our claim that only those who participate in the wedding feast of the king’s son can enjoy peace with God and everlasting life.  They slander Christ and his Christians, heaping contempt on them.  Why are they so vicious?  Because they are poor, lost, condemned sinners who don’t want to admit that they are poor, lost, condemned sinners who need a Savior from their sin.

Every nation that rejects the gospel pays the price.  God blessed ancient Israel with the gospel.  For the sake of the Christ to come he showered his favor upon her, delivering her from her enemies, and blessing her with his holy word.  When Christ came she rejected him.  So God rejected her, sending in the Roman barbarians to destroy her and they did, burning Jerusalem to the ground, not leaving one stone upon another.  It gives God no joy to punish nations who reject his word.  Jesus himself lamented about Jerusalem’s impending destruction with tears saying, “How often I wanted to gather your children together as a hen gathers her chickens under her wings, but you would not.”  If God destroyed ancient Israel whom he had chosen as his own, will he not destroy any nation that despises his word and rejects his Christ?

There are those who politely ignore the gospel.  There are those who viciously suppress the gospel.  And then there are those who outwardly confess it but don’t believe it.  The man without a wedding garment is the one who attaches himself to the Church, receives Holy Baptism, attends the Divine Service, eats and drinks Christ’s body and blood, and yet trusts in himself, not in Christ, for his salvation.  He isn’t wearing a wedding garment.  He is not covered with the righteousness of Christ because he doesn’t trust in Christ’s obedience, suffering, and death for his sins.  Only those who trust in the blood and righteousness of Jesus stand before God as saints and are truly members of the Holy Christian Church.  Hypocrites and unbelievers will be cast out into outer darkness where there is no peace or forgiveness or hope.

Ancient Israel received God’s grace and took it for granted.  She figured she was entitled, that God would love her because she was so lovable, not for the sake of the promised Savior who would redeem her from all her sins by his blood.  So she despised God’s grace, relying on herself.  When her Redeemer appeared in the flesh she refused him.  Not seeing her sins she saw no need to have them taken away.  Denying that her own righteousnesses were as filthy rags, she did not hunger and thirst for the righteousness of Jesus.  She despised the offered wedding garment, thinking the clothing of her own good deeds was quite good enough.

Those who have no interest in wearing the wedding garment provided by Jesus’ obedience, suffering, and death have no interest in learning what God has to say about anything at all.  If they cannot humble themselves before their Creator when it comes to their eternal salvation, they cannot humble themselves before God in any area of life.  They may live outwardly decent lives, making good money and gaining the respect of the community.  But they are deaf to God’s word.  Their self-righteousness is like the child screaming defiance against his parents, covering his ears and yelling, “I can’t hear you.”  Because when you despise the blood and righteousness of Jesus, you despise every word that proceeds out of the mouth of God.

This is the community religion.  It’s the religion of being nice.  Niceness is a human trait, a human quality, a human expectation, and niceness is more highly prized in our community than anything God says about anything.  Is it nice to point out where popular churches teach contrary to God’s word?  No, it is not.  Is it nice to condemn popular sins?  No, it is not.  Is it nice to say that unbelievers who attach themselves to the church for social reasons will find themselves cast out into outer darkness where there is weeping and gnashing of teeth?  No, it is not nice.  But God cares nothing for nice.  Our God cares about the truth.

The community religion of niceness that prevails in the Red River Valley looks very pious on the outside, but inside it is dead.  When the standard of niceness as it appears to human eyes replaces the standard of God’s holy word the result is falling deeper and deeper into error.  You cannot reject God’s word without sliding down a slippery slope.  God’s word says God made man and woman to be different and that this difference means a woman may not preach publicly in the church.  The community religion says that’s not nice and they ordain women as preachers anyway.  A generation later they ordain homosexuals.  If you say this is wrong you are called a hater.

Jesus says, “I am the way and the truth and the life; no one comes to the Father except by me.”  But if you insist that Jesus is right and that only those who repent of their sins and trust in Christ as their Savior from sin are going to heaven, you are dismissed as an extremist.  But it was our Lord Jesus who told us this story about the fellow without the wedding garment tossed out into outer darkness, that is, into hell.

People in the name of the church sanctify sin, following the world as the world runs away from divine truth into certain destruction.  Don’t think that the descent into false teaching and the sanctification of immorality is going to stop.  It isn’t going to stop.  It’s going to get worse.

Don’t think that the days of persecuting the prophets are over.  They are here and they are now.  The mainline churches in America have abandoned God’s word.  And should we insist to our friends, neighbors, and loved ones that they leave such heterodox fellowships and join only churches that are faithful to the teaching of God’s word, well, is that nice?  Or is it not a violation of the religious rules of our community that say nobody can criticize anybody for any religious belief he holds?

We who cherish the wedding garment because it covers our sin and presents us spotless before our heavenly Father also cherish every word he teaches us.  His words are life.  Thank God for a congregation, be it ever so small, where we can confess with our brothers and sisters in Christ the whole truth of God’s word.  Our unity with one another is not a matter of submitting to human rules of niceness.  It is a spiritual fellowship in the gospel itself.  Our bridegroom Jesus came down from heaven to purchase us with his blood.  He has washed us by the washing with water by the word.  Where would we rather be on a Sunday morning than where God’s gospel and sacraments are given to us in their truth and purity?  And what greater treasure do we have in this life than the gospel of our dear Lord Jesus that gives us forgiveness of all our sins, makes us saints, and brings us to heaven?  Invited by God to the wedding feast of his Son, chosen by God himself to be clothed in his righteousness, there is no greater honor than that in all the world!