Commenting on Galatians 4:30, “But what does the Scripture say? Cast out the slave and her son; for the son of the slave shall not inherit with the son of the free woman,” Luther gives great insight on the Papacy.  In a time when we hear a lot of 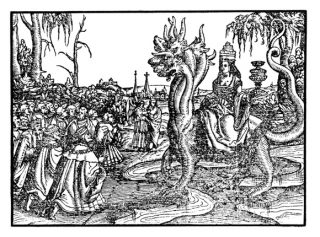 talk about moral failures and corruption in the papacy, these are very timely words of Luther.  Also, in a time when people forget about the wrath and judgment of God, even trying to say that Luther didn’t confess the vicarious satisfaction of Christ, these words could not be more relevant.

Many in our midst might deem these words of Luther to be not very ecumenical.  But they are confusing ecumenical with papally correct.  I would also like to remind everyone that the papacy is by design mainstream.  It will always be in the mainstream, just as surely as Republicans will always be in the mainstream.  This is because they teach that man’s will can accomplish what God would have it accomplish.  It isn’t necessarily counter-cultural to believe in natural law and make conservative arguments.  It is well within the culture, even if it is on the other side of the spectrum from the radically immoral left.

So while it is good for us to recognize those who have decency, may we always remember to confess what the Council of Trent condemns, that we are declared righteous, not by our own works nor by the movement of our own free will, but only through faith in Christ who made full satisfaction for our sins.  I’d like to make one more comment.  Note that the title of this post is not that Christians who are caught in the Romans Catholic Church stink.  May God preserve them and guide them to hear his pure Word.  It is that the papacy stinks.  There’s a big difference.  May God save all his saints from this impostor!  The following comes from his Lectures on Galatians, 1535 (AE 26:459-60):

“[Even] if the religion and discipline of the papacy stood now as it did once [when they were outwardly more pious], we would still have to follow the example of Paul, who attacked the false apostles despite their holy and virtuous fronts, and battle against the self-righteousness of the papal kingdom, saying: ‘Regardless of how celibate a life you lead or how you wear out your bodies with frequent discipline, you are slaves of the Law, of sin, and of the devil; and you will be cast out of the house, because you seek righteousness and salvation through your own works, not through Christ.’

Therefore we should pay attention not so much to the sinful lives of the papists as to their wicked doctrine and their hypocrisy, and this is what we chiefly attack. Let us suppose that the religion and the discipline of the ancient papacy were flourishing now and were being observed with the same rigor with which the hermits, Jerome, Augustine, Gregory, Bernard, Francis, Dominic, and many others observed it. We would still have to say: ‘If you have nothing to set against the wrath and judgment of God except your sanctity and chastity of your lives, you are clearly sons of the slave woman, who must be cast out of the kingdom of heaven and condemned.’ Satan does not defend the wicked lives of the papists either — which the more wholesome among them also despise — but he fights to defend and preserve their hypocrisy and work-righteousness. Here he cites the authority of the councils and the examples of the holy fathers, whom he declares to have been the founders of the holy orders and statutes. Therefore we are fighting today, not against the obvious wickedness and vice of the papacy but against its fictitious saints, who think that they lead an angelic life when they observe not only the commandments of God but also the counsels of Christ and works that are not required or works of supererogation. We say that this is a waste of time and effort, unless they have grasped that ‘one thing’ which Christ says is the only thing ‘needful’ and, like Mary, have chosen the good portion, which cannot be taken away from them (Luke 10:42).

That is what Bernard did He was a man so pious, holy, and chaste that I think he deserves to be put ahead of all the monks. Once, when he was gravely ill and despaired of his life, he did not place his trust in the celibacy that he had observed so chastely, or in the good works and acts of piety that he had performed in such quantity; but he put all these far from sight and took hold of the blessing of Christ by faith, saying: ‘I have lived damnably. But Thou, O Lord Jesus Christ, hast a double right to the kingdom of heaven: first, because Thou are the Son of God; secondly, because Thou hast won it by Thy passion and death. The first Thou dost keep for Thyself by Thy birthright; the latter Thou dost grant to me by the right, not of works but of grace.’ He did not set his monkery of his angelic life against the wrath and judgment of God but took hold of the one thing that is needful and thus was saved. I believe that Jerome, Gregory, and many other fathers and hermits were saved the same way. There is no doubt that in the Old Testament also many kings of Israel and other idolaters were saved in a similar way, casting away their vain trust in idols at the hour of their death and taking hold of the promise of God regarding the future Offspring of Abraham, the Christ, who was to bless all nations. And if any of the papists are to be saved today, they must depend, not on their own good works and merits but solely on the mercy of God offered to us in Christ; and they must say with Paul (Phil 3:9): ‘I do not have a righteousness of my own, based on Law, but that which is through faith in Christ.'”