The Thirteenth Sunday after Trinity

Click this link to listen to audio of this sermon.

Then He turned to His disciples and said privately, “Blessed are the eyes which see the things you see;  for I tell you that many prophets and kings have desired to see what you see, and have not seen it, and to hear what you hear, and have not heard it.”  And behold, a certain lawyer stood up and tested Him, saying, “Teacher, what shall I do to inherit eternal life?”  He said to him, “What is written in the law? What is your reading of it?”  So he answered and said, “‘You shall love the LORD your God with all your heart, with all your soul, with all your strength, and with all your mind, and your neighbor as yourself.'”  And He said to him, “You have answered rightly; do this and you will live.”  But he, wanting to justify himself, said to Jesus, “and who is my neighbor?”  Then Jesus answered and said: “A certain man went down from Jerusalem to Jericho, and fell among thieves, who stripped him of his clothing, wounded him, and departed, leaving him half dead.  Now by chance a certain priest came down that road, and when he saw him, he passed by on the other side.  Likewise a Levite, when he arrived at the place, came and looked, and passed by on the other side.  But a certain Samaritan, as he journeyed, came where he was, and when he saw him, he had compassion.  So he went to him and bandaged his wounds, pouring on oil and wine; and he set him on his own animal, brought him to an inn, and took care of Him.  On the next day, when he departed, he took out two denarii, gave them to the innkeeper, and said to him, ‘Take care of him; and whatever more you spend, when I come again, I will repay you.’  So which of these three do you think was neighbor to him who fell among the thieves?”  And he said, “He who showed mercy on him.” Then Jesus said to him, “Go and do likewise.” 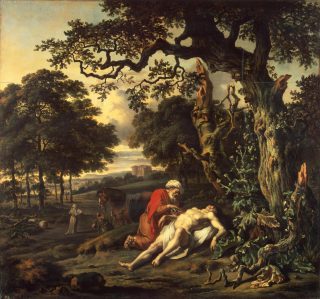 No one has ever seen God.  He is invisible.  He is a spirit.  He lives in that unapproachable light that no one can see and live to talk about.  Remember how Moses had to hide himself under the cleft of a rock when he spoke to God on Sinai?  Or how Isaiah cringed in fear, crying “Woe is me,” when he saw God in a vision?  The angels who live in the presence of God evoke fear in the hearts of those who see them.  God is a consuming fire.

But he hides his glory underneath the most humble form.  God becomes a man.  He takes upon himself our own flesh and blood, body and soul, and joins the human race.  His prophets had prophesied it, but they never saw it.  They never heard his voice spoken as the God become man.  The kings, whose kingdom Christ would inherit and bring to fulfillment, also never saw or heard what they yearned to see and hear.

Jesus is God in the flesh.  Make no mistake about it.  He does his miracles and teaches his teaching, not as a wise man who shares the wisdom of humanity, but as the eternal God.  God is man.  The disciples saw this.  They heard his voice.  They were blessed.  Had God not become a man we could never have known God.  God joined us sinners in our helplessness in order to bring us back into fellowship with him.

Right after Jesus told his disciples how blessed they were to see and hear the evidence that he was their God and Savior, a man who thought he didn’t need a Savior came up to him to test him.  He didn’t come to Jesus to receive what Jesus alone could give him.  He came to Jesus to test him.  When you come to God to put him to the test you will be frustrated.  God won’t be put to the test.  He’s God.  You’re not.  He’s in charge.  You’re not.

The lawyer didn’t ask Jesus anything about his duty to love God.  Perhaps he figured that he had already loved God as God requires.  He asked him about his duty to love his neighbor.  Specifically, he asked him who his neighbor was.  Why did he ask Jesus this question?  He wanted to justify himself.  He wanted to put the law to what he regarded as its proper use, and that was to make him into a righteous man.  But the command to love your neighbor is pretty open-ended.  How can you possibly obey it?  So he asks Jesus who his neighbor is in an effort to contain the law within manageable boundaries.  If I can know who specifically I must do good to, then I can figure out how to use the law to make me righteous.

Jesus answered the question the man asked.  The man didn’t ask Jesus how he could receive eternal life as God’s gift.  Had he asked that question, Jesus would have answered it by telling him, “I am the way, the truth, and the life, no one comes to the Father except through me.”  The man asked Jesus what he had to do to inherit eternal life.  An inheritance is a gift, but this man wanted to work for it.  Jesus answered the question he asked.  He pointed him to the law.  If you want to do what you need to do to get eternal life you must do what God says in his law to do.  You don’t get to make up your own law.

Many people think they may.  They make it up as they go along and assume that God will agree with what they decide.  But if God is God and we are not then it is God who decides what is good and bad.  If we are going to do what God says love requires we must let him decide what that entails.  We don’t get to decide.

Jesus told the man a story.  The man wanted to know was who his neighbor was.  Jesus told him.  The neighbor is the man who shows mercy to the one in need.  There are no rules that show you how.  Mercy comes from mercy.  We know God as he is merciful to us.  The mercy we receive is the mercy we give.  Those who are merciful are those who have mercy to give.  Those who haven’t received mercy have no mercy to give to others in need.

The priest and the Levite had nothing personal against the man who was lying on the side of the road, wounded, and half dead.  They didn’t care.  Helping him would be a bother.  It might be dangerous.  They might get their clothes dirty.  Their religion was very important to them.  They were meticulous about doing the things by which they would inherit eternal life.  Among the long list of religious regulations they slavishly observed there was nothing telling them what to do if you found a guy half dead lying on the road between Jerusalem and Jericho.  So they had no obligation to help him.

They were religious men, devoted men, godly men, men of prayer.  Undoubtedly, they prayed for the poor fellow on the side of the road.  But their religion of works-righteousness was a religion that was of no benefit to their neighbor.  They did their good deeds to benefit themselves, to become good enough to get God’s reward.  They didn’t do them to help others.

The Samaritan in Jesus’s story, on the other hand, did what he did for the man, not because he knew a rule of which the priest and the Levite were unaware.  There was no rule.  There was the man’s need.  To love your neighbor is not to do a good deed a day so you can pat yourself on the back for your devotion to duty.  The Samaritan was in the same place where a man who needed his help was.  When he saw the man and recognized his predicament, he was filled with compassion.  He hurt inside.  Compassion means to suffer with someone.  That’s what love does.  It sees in the other’s need one’s own need.  What would I want that person to do for me if I needed what he needs?  That’s what I am going to do.

It’s called the Golden Rule.  Jesus taught it.  Jesus lived it.  And all of the moralists in the world put together haven’t obeyed it on their very best day.  Oh, they might show such love toward their own children, perhaps their closest friends.  But the love God requires is to help those who would never help you and who cannot repay you.  It is not done for the benefit of the doer.

Those who would justify themselves do the good deeds they do, not for their neighbor, but for themselves.  When you believe that your works are your road to heaven, you must make sure the road is solid.  Learn the rules.  Obey them.  But that’s folly.  Worse, it’s unbelief.  It is unbelief to try to earn eternal life.  You cannot earn it.  Jesus gives it and he gives it freely.

Jesus is the Good Samaritan.  He sees us wounded and lying half dead on the side of the road, helpless in our own sins.  The law sees us and walks by on the other side leaving us in our helpless state.  The law cannot help you on your way to heaven.  Christ alone is our salvation.  He comes to you and binds up your wounds.  He pours in oil and wine.  He carries you to the inn.  He purchases your health and entrusts you to the care of the church.  He gives the innkeeper the gospel and sacraments by which your spiritual life will be strengthened.  Jesus does everything you need.  He is the Good Samaritan.  Despised by those who are working their way to heaven, ignored by those who have no use for God, for us sinners who are in search of forgiveness and spiritual health he finds us and saves us.  We didn’t find him.  We found robbers who left us on the side of the road.  We tried it our way and we ruined it.  He found us.  And he rescued us from our sins.

Jesus is the Good Samaritan and this is his holy church.  Here we are and here is the hospital for our souls.  The most potent medicine in this hospital is the forgiveness of sins freely given us for Christ’s sake.  He paid for it by his own obedience, suffering, and death.  Where God’s mercy is given us is where our hearts are changed.  We learn to love as we have been loved.