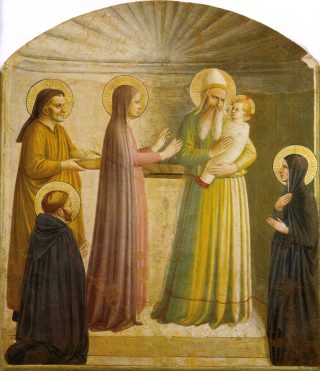 “And his father and his mother wondered at what was said about him” (Lk. 2:33). It’s the most wonderful time of the year, as the world sang during its pseudo-Christmas season, which was actually Advent, and has ceased to sing now that it’s actually Christmas and there’s actually something to wonder at, namely, the birth of Christ. But the world wonders at parties for hosting, marshmallows for toasting, and thousand of other man-made things that, truth be told, aren’t wonderful at all.

In order for something to be a wonder, it must be unique, and unusual. The seven wonders of the world come close to meeting the qualifications, but miss the last, big characteristic of a wonder. A true wonder is from God, as it says in Psalm 72, “Blessed be the Lord, the God of Israel, who alone does wonders” (Ps. 72:18). Wonders are often introduced in Scripture by the word “behold!” which means, “Look! This is important. This is divine. This is not something you see every day.”

The world mimics the wonders of God, leading people to marvel at that which is not wonderful, and making people bored with true wonders. Perhaps the greatest “wonder” that the world offers in our day is the screen, whether the television, the computer, the tablet, the smartphone, or whatever other variation the world devises. On these screens you can see special effects, oddly-edited photos, videos, colors. And the world advertises these screens with pictures of children marveling at the garish glow, husband and wife sitting next to each other smiling, each with a pair of headphones, together, but not really, staring stupefied at their screens.

“Behold!” the world says, and as in Scripture, people prepare themselves for a miracle. But the miracle never comes. The world simply says, “Behold!” again. Behold! Behold! Behold! Look at this! Over here; over there! Behold! And people wonder, even though there is no wonder.

Instead of wonder, the world offers captivation, emphasis on captive. The world doesn’t show you its so-called “wonderful” things for your sake. The world shows you things on screens because the world needs you to watch. The world wants to catechize you in its ways so that you assent to and participate in its folly. The world wants to sell you its mammon. And it will do these things under the guise of innocent, wondrous entertainment, and will not let you look away.

Now I suppose I should make it clear why I’m bringing this up. I’m not saying that you’re obligated by God’s Law to get rid of your screens or stop looking at them – though I will say it is a gross misuse of Christian freedom if we purposefully watch things that tempt us to sin, or if we find some delight in watching other people break God’s commandments. But I bring this up because I want to guard you against the world’s captivation and direct you toward true wonder.

And if you’ll consider for a moment what you find to be wonderful, you’ll realize the necessity of addressing this topic. Our sinful hearts stand in awe of screens, and celebrity, and clever advertisements. And off the screen, think about anything that has made you say, “Wow, I want to tell someone about that!” Then think whether it was anything truly wonderful.

Contrast captivation with your wonder at the things of God. Which gets you more excited: going to a movie, or coming to church? The season finale of your favorite TV show, or the Lord’s Supper? Which puts more wonder in your heart: seeing a celebrity in the flesh, or receiving your Lord in the flesh? Going to a concert, or joining your voice with angels and archangels and all the company of heaven?

Our hearts stand and stare in reverence at mere men, and in a completely backwards way think less of Jesus. But will mere men save us from sin, death, and the devil? Does staring at a screen for eternity sound like paradise? Glancing through an endless Facebook feed forever, surfing through nine million channels world without end – behold! behold! behold! and never beholding anything – frankly that sounds more like hell.

Now the problem with out flesh is that our eyes think they reign supreme. If something doesn’t look wonderful, then it’s not. This is why we wonder at flashy things, but not plain-looking things, even if the plain-looking things are in fact more wonderful. Our eyes ought to be subordinated to our ears, because our ears can receive the Word of God, which interprets what we see. Yet we don’t have the power within us to make our eyes take a back seat. Left to ourselves we would walk by sight and not by faith. Left to ourselves we would spend a lifetime gaping at all the wrong things and then suffer eternal death.

But our Lord has not left us to ourselves. He has spoken his Word to us, which not only interprets what we see, but is also the means by which the Holy Spirit exalts our ears above our eyes. With this in mind we can hear today’s reading and see what’s really happening.

Mary and Joseph took Jesus to the temple in Jerusalem according to the Law. Forty days after a woman gave birth to a male child, she had to offer a sacrifice for her purification: a lamb and a pigeon or turtledove, or if she was poor, two pigeons or turtledoves. Since Luke quotes from the section concerning poor people – “a pair of turtledoves or two young pigeons” (Lk. 2:24) – we have an image of a lowly couple coming to the temple with their newborn son, which doesn’t seem much out of the ordinary, or particularly wonderful.

Then we heard, “Now there was a man in Jerusalem” (Lk. 2:25), which is a little soft. More literally it says, “And behold! there was a man in Jerusalem.” Behold! We prepare ourselves for something wonderful, even though our eyes can’t imagine what could be so wonderful about Simeon. But we hear, “this man was righteous and devout, waiting for the consolation of Israel, and the Holy Spirit was upon him. And it had been revealed to him by the Holy Spirit that he would not see death before he had seen the Lord’s Christ” (Lk. 2:25-26).

Simeon is about to identify the Christ, and because the Holy Spirit is upon him, his identification will be correct, no matter what the Christ looks like. “And he came in the Spirit into the temple, and when the parents brought in the child Jesus, to do for him according to the custom of the Law, he took him up in his arms and blessed God” (Lk. 2:27-28). Now picture what’s happening here. There’s a presumably old man holding a baby – nothing that the eyes find very spectacular. But hear what he says:

“Lord, now you are letting your servant depart in peace, according to your word; for my eyes have seen your salvation” (Lk. 2:29-30). His eyes saw a helpless baby. But he wasn’t just looking with his eyes. He was also looking with his ears. He knew the Word that he had received from the Spirit: “This child is the Christ.” God’s Word colored what he saw, or more accurately, God’s Word lifted the veil from his eyes so that he saw things as they actually were: “My eyes have seen your salvation.”

And what is the proper response to this? Mary and Joseph show us the proper response: “And his father and his mother wondered at what was said about him” (Lk. 2:33). This doesn’t mean they were confused. It means it hit them again who and what Jesus is. Even though awe had filled their hearts previously because of Jesus, awe filled their hearts again. This is the nature of a true wonder: it continues to give awe to those who contemplate it, and it never gets old.

And note that they did not wonder at what they saw. “They wondered at what was said about him.” They wondered at the Word. God’s Word is wonderful, and leads us to wonder at true wonders. The eyes had no reason to wonder at Jesus, but when the ears begin to wonder at God’s Word, the Holy Spirit leads the eyes to join in. The eyes behold an old man holding a baby in his arms, and they wonder because they have it from the ears that this baby is God, who holds all things in his arms. Yes, here is true wonder, the greatest wonder, the Lord’s enfleshment, as we said in the prayer today: “O God, our Maker and Redeemer, You wonderfully created us and in the incarnation of Your Son yet more wondrously restored our human nature.”

Behold! Here is wonder: Mary gives nourishment to the one who gives nourishment to her. Joseph protects the one who protects him against all danger. “And the child grew and became strong” (Lk. 2:40), this child on whom everything in the world depends for growth and strength. The narrowness of our human understanding cannot grasp this. We can only be overcome with the amazement of a mighty wonder, and admire Jesus, and receive his benefits.

Behold! Here is wonder: that God cared so much for man that he became man, yet remained God, having two natures: one human, one divine, united in a single person. If we think of a God, we find a mortal, who learns and grows and sleeps and suffers. If we think of a mortal, we find a God, who gives sight to the blind, makes the lame walk, cleanses lepers, and raises the dead.

But our wonder is not confusion. It’s no mystery why the Son of God came in the flesh. As man, Jesus lived under the Law, and as God he fulfilled it with divine perfection. As God, Jesus bore the sin of the world, and as man he the suffered punishment of our sins and died, and thus as God and man he has kept the Law for us, and has killed our sins in his body on the cross.

Behold! Here is wonder: that Jesus returned to life, not by casting off his flesh, but by rising in the flesh to remain forever in the flesh, to ascend to his Father in the flesh and seat man’s flesh at God’s right hand.

Behold! Here is wonder: that Jesus’ flesh does not have the limitations of our flesh, but receives from his divine nature divine attributes. It says in 1 John 1, “the blood of Jesus his Son cleanses us from all sin” (1 Jn. 1:7). And Jesus says in John 6, “Whoever feeds on my flesh and drinks my blood has eternal life” (Jn. 6:54). It’s not the nature of blood to cleanse from sin or the nature of human flesh to give eternal life. But because Jesus’ blood is God’s blood and Jesus’ flesh is God’s flesh, his blood can cleanse from sin, and his flesh can give eternal life.

And this wonder is not locked away in time past. Jesus can be omnipresent with his flesh, everywhere at once with his flesh. Jesus is present with us in the flesh this very moment. And if you would look on him and wonder, then look on his body and blood in the Lord’s Supper and say with Simeon, “My eyes have seen your salvation.” What screen or human spectacle can compare with our Lord who leaves the wonder of heaven to be our wonder on earth? Jesus constantly gives you fresh marvel by his marvelous Gospel. To Jesus be the wonder forever. Amen.