Congregations Matter, already proven to be nothing more than a rebrand of the old Jesus First and Day Star movements of the 2000s has shown its colors again.  Their twitter account just tweeted support for President Schlimpert of Concordia, Portland, who announced January 19th that Concordia will now charter the Queer Straight Alliance and also enact several new policies to make safe spaces and other concessions to demands.  Here is a screenshot: 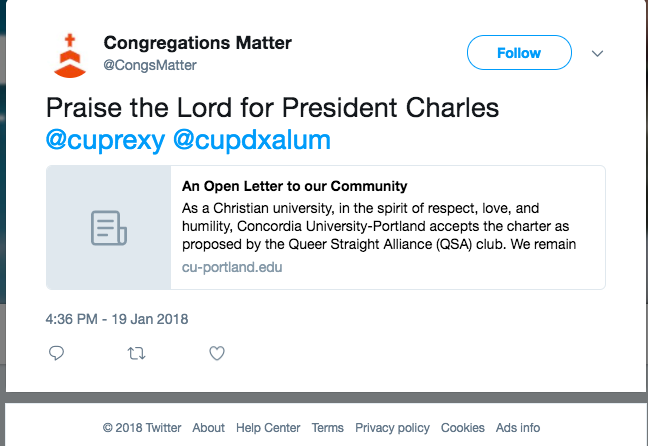 So, Congregations Matter believes it is appropriate to “Praise the Lord” for a Concordia University President approving the charter of a Queer Straight Alliance club with the stated goal of changing the view of Christian folks about behaviors and lifestyles traditionally condemned under the Sixth Commandment <note>.  Catch that?  Congregations Matter praise the Lord for actions which will lead to more people denying the plain meaning of the Sixth Commandment.  Which lord are they praising?

18 For the wrath of God is revealed from heaven against all ungodliness and unrighteousness of men, who by their unrighteousness suppress the truth. 19 For what can be known about God is plain to them, because God has shown it to them. 20 For his invisible attributes, namely, his eternal power and divine nature, have been clearly perceived, ever since the creation of the world, in the things that have been made. So they are without excuse. 21 For although they knew God, they did not honor him as God or give thanks to him, but they became futile in their thinking, and their foolish hearts were darkened. 22 Claiming to be wise, they became fools, 23 and exchanged the glory of the immortal God for images resembling mortal man and birds and animals and creeping things. 24 Therefore God gave them up in the lusts of their hearts to impurity, to the dishonoring of their bodies among themselves, 25 because they exchanged the truth about God for a lie and worshiped and served the creature rather than the Creator, who is blessed forever! Amen. 26 For this reason God gave them up to dishonorable passions. For their women exchanged natural relations for those that are contrary to nature; 27 and the men likewise gave up natural relations with women and were consumed with passion for one another, men committing shameless acts with men and receiving in themselves the due penalty for their error. 28 And since they did not see fit to acknowledge God, God gave them up to a debased mind to do what ought not to be done. 29 They were filled with all manner of unrighteousness, evil, covetousness, malice. They are full of envy, murder, strife, deceit, maliciousness. They are gossips, 30 slanderers, haters of God, insolent, haughty, boastful, inventors of evil, disobedient to parents, 31 foolish, faithless, heartless, ruthless. 32 Though they know God’s righteous decree that those who practice such things deserve to die, they not only do them but give approval to those who practice them.

The following is the language of the charter that was deemed questionable but is now fully acceptable.  These are the stated goals of the club that are now fully approved by Concordia Portland President Schlimpert: