The following sermon corresponds to Advent 1 Midweek according to the Advent service plan “For unto us a Son is Given.” 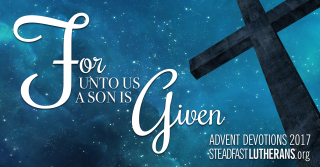 “Long ago, your fathers lived beyond the Euphrates, Terah, the father of Abraham and of Nahor; and they served other gods” (Josh. 24:2). This was back when Abraham was called Abram, before he knew the one true God. But the Lord said to Abram in Genesis 12, “Go from your country and your kindred and your father’s house to the land that I will show you. And I will make of you a great nation, and I will bless you and make your name great, so that you will be a blessing. I will bless those who bless you, and him who dishonors you I will curse, and in you all the families of the earth shall be blessed.”

Sometime later the Word of the Lord came to Abram in a vision: “Fear not, Abram, I am your shield; your reward shall be very great.” Abram understood that the Lord was talking about the offspring whom he had promised. But Abram said, “O Lord, what will you give me, for I continue childless, and the heir of my house is Eliezer of Damascus?” (who was the chief slave in his house). And the Word of the Lord came to the aging Abram, “This man shall not be your heir; your very own son shall be your heir.” The Lord brought Abram outside and said, “Look toward heaven, and number the stars, if you are able to number them. So shall your offspring be.” And then comes one of the most famous lines of the Old Testament: “And he believed the Lord, and he counted it to him as righteousness.” This is not the righteousness of works, but the righteousness of faith.

Time passed. It had been twenty-four years since the Lord had first promised an offspring to Abram. When Abram was ninety-nine years old the Lord appeared to him and said, “Behold, my covenant is with you, and you shall be the father of a multitude of nations. No longer shall your name be called Abram, but your name shall be Abraham” – which means “father of many” – “for I have made you the father of a multitude of nations…. As for Sarai your wife, you shall not call her name Sarai, but Sarah shall be her name” – which means “princess.” “I will bless her, and moreover, I will give you a son by her. I will bless her, and she shall become nations; kings of peoples shall come from her.”

And what was Abraham’s response to this? “Then Abraham fell on his face and laughed and said to himself, ‘Shall a child be born to a man who is a hundred years old? Shall Sarah, who is ninety years old, bear a child?’” Sarah had the same response in the reading this evening. “Sarah laughed to herself, saying, ‘After I am worn out, and my lord is old, shall I have pleasure?’”

The Lord said to Abraham, “Why did Sarah laugh and say, ‘Shall I indeed bear a child, now that I am old?’ Is anything too hard for the Lord? At the appointed time I will return to you, about this time next year, and Sarah shall have a son.”

On a human level this doubt is understandable. For twenty four years Abraham had been hearing the same promise of an offspring, and as those years went on it seemed less and less likely, according to the rules of human procreation, that the promise would ever reach fulfillment – at least not involving Sarah. The way of women had ceased to be with Sarah, and they were both older than most people live in our days. Abraham believed the Word of the Lord; he trusted the promise. But when he heard that his ninety-year-old, barren wife would conceive the child, that promise flew in the face of everything he knew and experienced. And he laughed, not because the promise seemed joyful, but because the promise seemed unbelievable.

“Behold, I am making all things new,” Jesus says in Revelation 21:5. Yet the world seems to be going from bad to worse. “If anyone is in Christ, he is a new creation,” it says in 2 Corinthians 5. “The old has passed away; behold, the new has come.” And you laugh, because your sinful flesh seems the same as it’s ever been: the same sinful desires, the same sinful acts. “Yes, I am coming quickly,” Jesus promises in Revelation 22. Two thousand years have passed. We hear his promise, and instead of saying, “Amen,” we find it much easier to chuckle.

On a human level the doubt is understandable. But it’s not justifiable before God. The proper response to his promises is a laughter of joy and faith, not a laughter of doubt and unbelief. The Lord scolds us for such faithless laughter, just as he scolded Sarah. And we fear the Lord with Sarah, knowing we deserve much worse than a scolding. With all of God’s people we pray, “Lord, I believe; help my unbelief.”

And the Lord does help our unbelief. He helps our unbelief by being true to his promises. The Lord visited Sarah just as he had said. She conceived and gave birth to a son. Abraham named his son Isaac, which in Hebrew means “he laughs.” And Sarah said, “God has made laughter for me.” Now Abraham and Sarah laugh with a godly laughter, the laughter of joy, because God has fulfilled his promise and confirmed his Word to all future generations, even for our sake.

And even greater confirmation has the Lord given to his Word. When the fullness of time had come, the Lord came in flesh himself in fulfillment of his ancient and trustworthy promise to Adam and Eve. Jesus is the greater seed of Abraham, the true Isaac. Jesus is like Isaac because he lives up to Isaac’s name: he laughs. He laughs at the devil and sin and death. He threw himself headlong into them, and though he suffered he feared them not and treated them like a joke.

And Jesus is like Isaac because he brings laughter to God’s people. He died on the cross to forgive your sins and give you a merry heart. He rose from the dead so that you can laugh at death rather than fear it. Jesus had given you a joyful laughter by proving true to his promises, so that even if his promise seems slow in coming, you can rejoice, knowing that everything he says is true. He kept his promise and came once. He will keep his promise and come again. And at that time it will be like Zechariah 8, “the streets of [Zion] shall be full of boys and girls laughing in her streets.” Amen.