This is the second article in a series published in the local newspapers of Clayton County, IA.

Luther was brought before the Emperor, Charles V, at the Diet of Worms in 1521.  They told him to recant his writings about man not having the free will to merit God’s 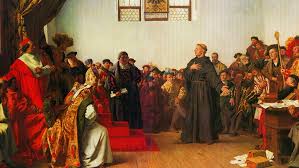 grace, about the pope not having authority over souls in purgatory, and about how we are declared righteous before God by faith alone apart from works.  Luther replied, saying that his conscience was captivated by God’s Word.  He could not go against Scripture.  Luther believed that the Scriptures did not err and were the only source of Christian doctrine.

Luther opposed the Romanist error that the Scriptures derive from the church and therefore the Scripture’s true meaning is dependent upon the church’s interpretation.  By church they understand a magisterium of bishops, cardinals, and popes with their councils.  But Luther maintained that Scripture alone is the revelation of God’s heavenly doctrine.  It does not depend on the church.  Rather, the church depends on the doctrine clearly revealed in Scripture.

When we say that Scripture alone is the source of heavenly doctrine and saving knowledge, we are affirming that everything the Scriptures say is true, even for today.  We are also affirming that the Scriptures are clear.  This is why, for example, we do not ordain women to be pastors.  This is because St. Paul, teaching the Biblical doctrine of marriage, creation, and the roles of men and women, clearly says in 1 Corinthians 14:34 and 1 Timothy 2:12 that women are not to teach/preach publicly in the church.

Unfortunately, even some who claim the name Lutheran simply ignore St. Paul’s words.  They assume that they may have been true for his context, but not for ours.  Or they say that they are unclear for our day.  But this is the same argument the Romanists made against Luther when he pointed to St. Paul’s clear words that man is justified before God by faith apart from any works of the law (Rom 3:28), or that man does not have it in himself to come to God by his own will (Rom 9:16).  They said that the Scriptures were not clear on this.  But if we say the Scriptures are unclear then we cannot rely on them.

This principle of Scripture alone still applies today.  The passing trends in our culture, such as egalitarianism, feminism, and other social “isms” do not serve as our norm for doctrine.  These trends tell us to depend on our own free will and to believe in ourselves rather than in God.  And instead of giving us clarity and confidence they make us confused and cowardly.  But the Scriptures, revealing Christ to us, give us a solid foundation.  And with that, they enlighten our hearts with confidence in God.