This is the third article in a series published in local newspapers in Clayton County, IA.

“Therefore we conclude that a man is justified by faith without the deeds of the law.” Romans 3:28.  “But he who does not work but trusts in him who justifies the ungodly, his faith is counted to him as righteousness.”  Romans 4:5. 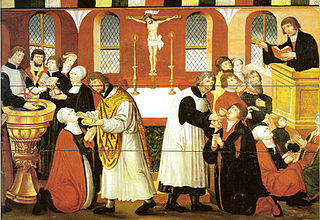 These two passages from Scripture get to the heart of the Reformation theology.  How are we righteous before God?  Is it by a combination of faith and works?  Or is it by faith apart from works?  The Scriptures teach clearly that it is by faith apart from works.  This is why Luther and his colleagues said that we are justified by faith alone.  By saying that we are justified by faith alone, we do not mean that faith sits by itself.  Of course, faith depends on God’s Word of grace, not on our own natural will (Rom 10:17).  Faith also trusts in Christ alone and claims his righteousness alone as our righteousness by which we stand before God (Phil 3:9).

When we say that we are justified by faith alone, we need to unpack it a bit more.  We are saying that God counts us righteous before himself solely on the basis of what Christ did on our behalf, not in view of any of our own works, even if these works are done with the assistance of God’s grace.  St. Paul clearly says in Titus 3:5 that God saved us not because of works done by us in righteousness.  That is, even those works that we do by the help of God’s Spirit, which are pleasing to God — even these righteous works are not the basis for our salvation.  Instead, it is only on the basis of God’s mercy in Christ, which he has given us through the washing of regeneration and renewal through his Holy Spirit (cf. John 3:5; Eph 5:26; 1 Pet 3:21).

So if Christ and his obedience in our place is the only basis for our righteousness before God, as St. Paul describes in Romans 5:18, then our works are excluded.  This is how St. Paul describes the righteousness of God revealed in the gospel in Romans 3:21 and following.  God sent forth his Son as the atoning sacrifice for sin.  THEREFORE, he says in verse 28, “WE CONCLUDE that a man is justified by faith apart from the works of the law.”

Faith also bears fruits of good works (Gal 5:22), which count us righteous before the world.  This is what St. James teaches when he says that we are not justified by faith alone, but by works also (Jam 2:24).  This is not the same as being justified before God, since by the works of the law no man will be justified in his sight (Rom 3:20).  And though Abraham may be justified by works, this is not before God (Rom 4:2).