Grain, wine, and oil were the food staples of Israel, along with the animals. When the people stopped listening to the Word of the Lord, these – the grain, wine, oil, and livestock – became scarce. This was in fulfillment of the curses which Moses spoke to Israel in his Deuteronomy sermon: 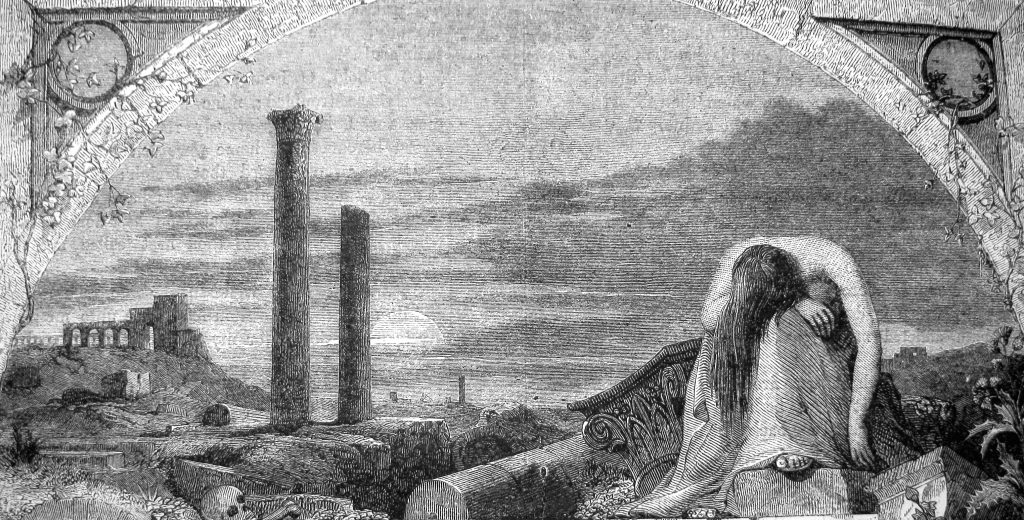 But it shall happen, if you do not listen to the voice of Yahweh your God, to guard, to do all his commandments and his statutes which I am commanding you today, that all these curses shall come upon you and overtake you: … Much seed you will bring out to the field, but little shall you gather, for the locust will consume it. Vineyards you will plant and work, but wine you shall not drink, nor shall you gather, for the worm will eat it. Olive trees you will have in all your territory, but with the oil you shall not anoint yourself, for your olive will drop off… Yahweh will heave a nation upon you from afar, from the end of the earth, just like the eagle swoops down, a nation whose tongue you do not hear, a nation strong of face, who does not lift up the faces of the old nor show favor to the young. And it shall eat the fruit of your cattle and the fruit of your ground, until you are destroyed; who will not leave you grain, wine, or oil, the young of your herds, or the offspring of your flock, until they have made you perish. (Dt. 28:15, 38-40, 49-51).

When the Lord took away the grain, wine, and oil, along with the animals, it taught the sons of Israel, “Not on bread alone shall man live, but on everything that comes out of the mouth of Yahweh shall man live” (Dt. 8:3).

This was the worst part about the absence of grain, wine, oil, and animals: the sons of Israel could not approach the Lord in the tabernacle. They could follow none of his institutions. It would be like if the Lord cut off our grain and wine and we couldn’t receive the Sacrament of the Altar. Thus, not only did the Lord strip them of earthly sustenance; he also took away the means of grace.

The prophet Joel records such an effect. He comments on the loss of earthly produce: “The field is devastated, the ground mourns, for grain is devastated, wine dries up, oil languishes” (Joel 1:10). And then he comments on the effect this has had in the house of God: “Gird yourselves, and wail, O priests; wail, O ministers of the altar. Go in, lodge in sackcloth, O ministers of my God, for grain offering and libation are withheld from the house of your God” (Joel 1:13).

And such chastening came upon the sons of Israel in the era of the Judges:

1 And the sons of Israel again did what was evil in the eyes of Yahweh, and Yahweh gave them into the hand of Midian for seven years. 2 And the hand of Midian prevailed over Israel. Because of Midian the sons of Israel made themselves the dens, which are in the mountains, and the caves and the strongholds. 3 And it happened when Israel sowed that Midian came up; and Amalek and the sons of the east came up against them. 4 And they encamped against them and ruined the yield of the earth until you come to Gaza. And they did not leave any sustenance in Israel, nor sheep, nor ox, nor donkey. 5 For they and their livestock came up, and their tents, and they came like locusts in number – and of them and of their camels there was no counting. And they came against the land to ruin it. 6 And Israel became very low because of Midian. And the sons of Israel cried out to Yahweh.

The sons of Israel feel their need. They dwell in the land of promise no better off than they were as slaves in Egypt. And at least in Egypt, they could take comfort in the meat pots and bread, the fish, cucumbers, melons, leeks, onions, and garlic (Ex. 16:3, Num. 11:5). Here they had nothing. They failed to listen to the Lord, and now they are receiving the curses.

Yet it seems that the sons of Israel stop at the physical needs and don’t realize how those physical needs are supposed to direct them to even greater needs, namely, the need to listen to God’s Word. And so when they cry out to the Lord, the Lord does not promise them deliverance. We don’t have the line from the first two cycles, “Yahweh raised up a savior” (Judg. 3:9, 15). The Lord gives them no comfort because they don’t get it. They feel a need, but they stop short. It is as Jesus said to the crowd who pursued him after the feeding of the five thousand: “Amen, amen, I say to you, you seek me not because you saw signs, but because you ate of the loaves and were satisfied” (Jn. 6:26).

When God’s people seek him, and yet do not understand their sin and have not repented, the Lord does not proclaim the Gospel. He proclaims reproaches:

7 And it happened when the sons of Israel cried out to Yahweh on account of Midian 8 that Yahweh sent a prophet to the sons of Israel, and he said to them, “Thus says Yahweh the God of Israel: I brought you up from Egypt, and I brought you out from the house of slaves, 9 and I delivered you from the hand of Egypt and from the hand of all who oppressed you, and I drove them out from before you, and I gave you their land, 10 and I said to you, ‘I am Yahweh your God: you shall not fear the gods of the Amorites in whose land you are dwelling.’ But you have not listened to my voice.”

The Israelites suffered the curses; now the Lord reminds them of the cause behind those curses: they have not listened to his voice. These are the same Hebrew words from Deuteronomy 28:15. We have no comment concerning the response of the people. Whoever recorded the history of the Judges lets this reproach ring in our ears, and what can we do but stand silent? If we say anything at all, it can only be the words of Job, “Behold, I am insignificant. What shall I return to you? I set my hand to my mouth” (Job 40:4).

The Church retains the reproaches as part of the Good Friday service. The purpose of the reproaches is not to kick us while we’re down, nor to ensure that we’re really repentant, as if the level of our sincerity directly corresponds to the amount of mercy God is willing to grant. Rather, the reproaches do for us what they did for the sons of Israel. We feel needs, but we often feel symptoms, not root causes. Being miserable is not the same as repentance. Suffering is not the same as repentance. Repentance is sorrow over sin in its narrow sense, along with faith in Jesus Christ in its broad sense (Solid Declaration, V.7-9). The reproaches effect actual repentance (in the narrow sense), because the reproaches are the hammer of the Law.

And so we hear:

“Thus says the Lord: ‘What have I done to you, O my people, and wherein have I offended you? Answer me. For I have raised you up out of the prison house of sin and death, and you have delivered up your Redeemer to be scourged. For I have redeemed you from the house of bondage, and you have nailed your Savior to the cross. O my people!’”

As we shall see, the Lord is not deaf to us. He does not leave us languishing, but when he has brought us to the realization of our awful plight and to repentance, he turns, and stirs up his power, and arises to save us. “Though hidden yet from mortal eyes, his Gideon shall for you arise, uphold you and His Word” (LSB 666:2).