Happy Reformation Day! Now I could say that every year on the last Sunday in October, which is when we observe Reformation Day. But this year it is something special. Because this year, 2017, and this week, October 31–this is the 500th anniversary of that day in 1517 when the Reformation really began.

And you and I are here as a result. We are in a church, this congregation, and a church body, the Lutheran Church-Missouri Synod, that hold to the teachings that came out of that great Reformation. We are partnered with many other confessional Lutheran church bodies around the world that believe, teach, and confess likewise. All around the world, today and this week and this year, we and our fellow Lutherans are celebrating and giving thanks to God for 500 years of Reformation blessings. 500 years! All by God’s grace, for we surely do not deserve it. The Reformation that Luther started brought the great and glorious gospel of our Lord Jesus Christ into clear focus, uncluttered by the errors in doctrine and practice that had crept into the church. And, by God’s grace, we still are being blessed by the pure teaching of the gospel of Christ. It’s still all about Jesus! For this, we give God our most hearty thanks and praise! Thus our theme this morning: “Reformation 500: By Grace Alone.”

So how did it begin? Why do we mark that day some 500 years ago as the start of the Reformation? It was on October 31, 1517, that Martin Luther nailed his Ninety-five Theses to the door of the Castle Church in Wittenberg, Germany. And, without realizing it at the time, Luther started the movement that reformed the church and changed the course of world history. As we just sang:

A lonely monk, now long ago,
Nailed truth upon a door;
The echoes of that hammer blow
Rang out to many more.

So what was that truth that Luther nailed to the door? How did it lead to the Reformation of the church? Well, the Ninety-five Theses were a series of statements arguing against the sale of indulgences that the pope had authorized. Indulgences were certificates that were sold by the pope’s representatives, who told people that if they bought an indulgence they could spare themselves or their deceased loved ones years that they otherwise would have to spend in purgatory: “As soon as the money clinks in the chest, a soul flies up to heavenly rest!”

Luther saw how corrupt that practice was and how it went against the teachings of Scripture and how it led people away from true repentance and faith. So he drew up these theses, called a “Disputation on the Power and Efficacy of Indulgences,” in order to have a discussion within the church that could clean up the abuses and errors associated with the sale of indulgences. He posted the theses on the church door, written in Latin as propositions to be debated by learned theologians. But the theses were soon translated into the common language and published on printing presses, and the document spread like wildfire all across Europe.

From that point on, then, there was no turning back. The more Luther read the Scriptures, the more the light began to dawn on him. He recognized and spoke out against the errors that had come into the church, which took away the honor due only to Christ as our Mediator and which robbed troubled consciences of the comfort God wanted them to have in the pure gospel. 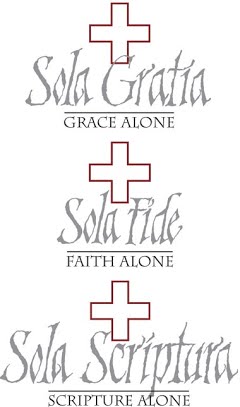 Now the central truths that Luther discovered have been summed up in three great “Solas,” as they are called: “Sola Gratia,” “Sola Fide,” and “Sola Scriptura.” “Sola” is Latin for “alone,” and so these three are translated as “By Grace Alone,” “By Faith Alone,” and “By Scripture Alone.” It just so happens that we find all three points contained in the Epistle reading for today, from Romans chapter 3. This was one of the most important passages that influenced Luther for the cause of the truth. I’ll take each one of the three “Solas” now, as we find them in Romans 3.

No, our sins cry out against us. God’s law, the Ten Commandments, accuse us and convict us and condemn us as sinners. There is no distinction. Even the best of us have not kept God’s law as we ought. We deserve death. What we have earned is eternal punishment under God’s judgment. That would be your sad situation if you were judged by your own righteousness.

But thank God, that’s not all there is. There is a righteousness God gives us as a gift. It’s a gift that we are justified, that is, pronounced righteous before God. It’s by God’s grace that we are saved. Grace is a gift word. Unmerited favor. And it’s on account of Christ.

One way to remember what grace means is this: Grace, “God’s Riches At Christ’s Expense.” G-R-A-C-E. You see, that’s what it says here in Romans, that we are justified by God’s grace as a gift, “through the redemption that is in Christ Jesus, whom God put forward as a propitiation by his blood.” That means that Jesus paid the price for us. He is the atoning sacrifice for our sins. Jesus, the very Son of God, shed his holy blood on the cross to set us free from our sins and death and hell. You are redeemed, you are free, you are forgiven, by Jesus’ blood! This is the gospel. This is the gift. This is grace, “God’s Riches At Christ’s Expense.” Jesus has opened the riches of heaven to all who take refuge in him. Life, eternal life, the sure hope of the resurrection–these all are the gift that God gives you by his grace.

“By Grace Alone”: We heard it in the hymn that the choir sang earlier and which we’ll all sing at the end of the service:

By grace alone
We are God’s own;
This is His gift of salvation.
We are put right,
Not by our might
But by God’s own declaration.
Christ’s holy blood,
The cleansing flood;
The gift is free,
And so are we
Freed from our sin’s condemnation.

“Sola Gratia, By Grace Alone.” Secondly, “Sola Fide, By Faith Alone.” Our text says of the redemption that is in Christ Jesus, that it is “to be received by faith.” And the passage concludes: “For we hold that one is justified by faith apart from works of the law.” This is where Luther wrote a big “SOLA” in his Bible, emphasizing that it is by faith alone that we are justified. Not some combination of faith and our works. No, by faith alone, “sola fide.”

And this faith saves because it is faith in Christ. Justification is by faith by virtue of the object of our faith, namely, Christ himself. Jesus did it all. We don’t–and we can’t–add anything to what Christ has done by our works. When Jesus cried out on the cross, “It is finished,” he really meant it. All the work has been accomplished. Simply trust in Christ for your salvation, and you can be sure of that. If it were to depend on our works, to any degree, you could never be sure. But because your faith rests on Jesus, you can be absolutely sure that nothing can separate you from God’s love, not even death itself. “By Faith Alone” is one of those big Reformation truths that we can hang our hat on. And it’s in the second stanza of that hymn:

Through faith alone–
Works won’t atone–
We trust in Christ’s mediation.
True God, true man,
His cross the span
That bridges sin’s separation.
He is the gift
Who heals the rift;
We thank the Lord
That He restored
This Gospel’s pure proclamation.

And then third, “Sola Scriptura, By Scripture Alone.” Where do we find that in Romans 3? Right here, where it says: “But now the righteousness of God has been manifested apart from the law, although the Law and the Prophets bear witness to it–the righteousness of God through faith in Jesus Christ for all who believe.” This term, “the Law and the Prophets”–that’s another way to say, the Bible. The Bible, the Holy Scriptures, the inspired and infallible Word of God–this is where Christ is revealed to us. This is where we find the truth about how we are put right with God. Therefore, anything that contradicts Scripture in this regard, we throw out the window. Whether it is the teaching of the pope or pop culture, if it goes against Scripture, we throw it out. As Luther would say when he appeared before the emperor: “My conscience is captive to the Word of God. Here I stand. I can do no other.” The third stanza:

Scripture alone
Can make God known,
Breathed out by God’s inspiration.
Man’s thoughts and dreams,
Our manmade schemes–
These are but mere speculation.
One holy light
Shines in the night;
God’s Word is sure
And will endure
To ev’ry new generation.

“Sola Gratia, Sola Fide, Sola Scriptura”: “By Grace Alone, By Faith Alone, By Scripture Alone.” Three “Solas,” all pointing to one Lord, our Lord and Savior Jesus Christ. This is what the Reformation is all about, still today, after 500 years. It’s still all about Jesus. Jesus for you, dear friends!

On Christ alone,
Our cornerstone,
The Church’s one foundation–
On Him we build,
As God has willed,
Heirs of the great Reformation.
Upon this Rock,
Though men may mock,
We’ll take our stand
In ev’ry land
With joy and glad celebration!