We date the Reformation back to October 31, 1517 when Martin Luther, an Augustinian friar and professor of theology, nailed the ninety five theses on indulgences to the door of the Castle Church in Wittenberg, Germany. Probably the most famous of the ninety five theses is the ﬁrst: “When our Lord and Master Jesus Christ said, ‘Repent’ (Mt 4:17), he willed the entire life of believers to be one of repentance.” At this point in his life Luther was not yet a Lutheran. But he was on his way. The ninety five theses demonstrate his sincere desire to ground the Christian faith and life in God’s grace, but he was still confused about what God’s grace was. He had been taught that if he did the best that he could do, God would give him grace to help him in his quest for eternal life. But Luther could not ﬁnd God’s grace in anything he did. He finally found God’s grace in Christ revealed in the written word, where it had been all along. He later described this “tower experience.” 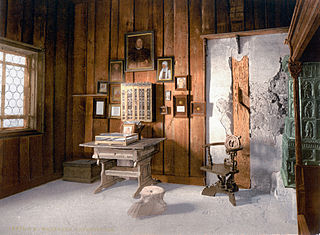 From the Preface to the Complete Edition of Luther’s Latin Writings of 1545.

Meanwhile in that same year, 1519, I had begun interpreting the Psalms once again. I felt conﬁdent that I was now more experienced, since I had dealt in university courses with St. Paul’s Letters to the Romans, to the Galatians, and the Letter to the Hebrews. I had conceived a burning desire to understand what Paul meant in his Letter to the Romans, but thus far there had stood in my way, not the cold blood around my heart, but that one word which is in chapter one: “The righteousness of God is revealed in it.” I hated that word, “righteousness of God,” which, by the use and custom of all my teachers, I had been taught to understand philosophically as referring to formal or active righteousness, as they call it, i.e., that righteousness by which God is righteous and by which he punishes sinners and the unrighteous.

But I, blameless monk that I was, felt that before God I was a sinner with an extremely troubled conscience. I couldn’t be sure that God was appeased by my satisfaction. I did not love, no, rather I hated the righteous God who punishes sinners. In silence, if I did not blaspheme, then certainly I grumbled vehemently and got angry at God. I said, “Isn’t it enough that we miserable sinners, lost for all eternity because of original sin, are oppressed by every kind of calamity through the Ten Commandments? Why does God heap sorrow upon sorrow through the Gospel and through the Gospel threaten us with his justice and his wrath?” This was how I was raging with wild and disturbed conscience. I constantly badgered St. Paul about that spot in Romans 1 and anxiously wanted to know what he meant.

I exalted this sweetest word of mine, “the righteousness of God,” with as much love as before I had hated it with hate. This phrase of Paul was for me the very gate of paradise. Afterward I read Augustine’s “On the Spirit and the Letter,” in which I found what I had not dared hope for. I discovered that he too interpreted “the righteousness of God” in a similar way, namely, as that with which God clothes us when he justifies us. Although Augustine had said it imperfectly and did not explain in detail how God imputes righteousness to us, still it pleased me that he taught the righteousness of God by which we are justified. See also Luther Discovers the Gospel by Uuras Saarnivaara, pages 36-37.

“For a long time I went astray [in the monastery] and didn’t know what I was about. To be sure, I knew something, but I didn’t know what it was until I came to the text in Romans 1:17, ‘He who through faith is righteous shall live.’ That text helped me. There I saw what righteousness Paul was talking about. Earlier in the text I read ‘righteousness.’ I related the abstract ‘righteousness’ with the concrete ‘the righteous One’ and became sure of my cause. I learned to distinguish between the righteousness of the law and the righteousness of the gospel. I lacked nothing before this except that I made no distinction between the law and the gospel. I regarded both as the same thing and held that there was no difference between Christ and Moses except the times in which they lived and their degrees of perfection. But when I discovered the proper distinction—namely, that the law is one thing and the gospel is another—I made myself free.” (Luther’s Works, Volume 54, p442)

Must we today have the same experience as Luther did? Some argue that Luther’s intense spiritual struggles colored his understanding of the Scriptures and that when we teach what he taught we are relying on his spiritual experience as a standard for the truth. Is this so?

1.  Where does the Old Testament teach justification through faith alone?
2.  Is it possible to rely on our works and at the same time to trust in God’s grace?
3.  Is the grace by which God justifies us a quality in our soul or something else?
4.  Is there any difference between being forgiven by God and being justified by God?

Many argue against the teaching of justification by faith alone by citing lames 2:24, “You see then that a man is justified by works, and not by faith only.” Do James and Paul teach contrary to each other? St. Paul writes of justiﬁcation before God (Romans 4). James writes of justification before men (James 2:18). Before God we are justified through faith alone. Before men, who cannot see our faith but only its fruit, we are justified by works. Paul and James do not contradict teach other. They are talking about two different things.