Is Jesus speaking to you? “All who labor and are heavy laden”: Is that you? Are you weary and burdened? Then, yes, Jesus is speaking to you today. He is inviting you to come to him and to receive from him the rest he freely offers.

Jesus’ words back then addressed people who knew what it was to labor and be heavy laden. The Pharisees would load heavy weights on people’s backs. They thought, and they taught, that the law was something–if you worked hard enough–you could keep. That was how you could be accounted righteous before God–by your works. And that is a heavy burden to bear. Only the best and most dedicated could hope to live up to that standard. Oh, and that would be people like . . . the Pharisees.

The Pharisees thought they could manage the law and master it. But what they did was to take the teeth out of the law and make it just an external, superficial keeping of the law in its outward form. Take, for example, the Sabbath commandment. People should rest from their work on the Sabbath in order to hear God’s word. But instead, the Pharisees made up their own regulations–how many steps one could take on a Sabbath day’s journey, that sort of thing–and they missed the whole point. They turned it into a manageable kind of law, one they could master. But that really sidesteps the force of the law. God’s law is meant to show us the sinfulness of our heart. It exposes us as sinners who do not want to do God’s will. In this way, God shows us our need for his forgiveness and his righteousness. But the Pharisees deluded themselves into thinking they were keeping God’s law and thus were righteous on their own.

To make themselves seem righteous, they had to look better than everyone else. So they devised a lot of man-made laws, a lot of regulations, and developed a whole system of minute rules that, if you really put your mind to it and worked really hard, I suppose you could keep in some outward fashion. Other people, of course, those who were not so attentive to these rules, would come off looking less religious, which in turn made the Pharisees look good by comparison. That was their game.

What was the effect this had on people? They felt weighted down, burdened. Jesus said of the Pharisees, “They tie up heavy burdens, hard to bear, and lay them on people’s shoulders.” By directing people to the law–what’s more, to their own added-on human regulations–the Pharisees tied heavy loads on people’s backs. It was more than they could bear.

This issue came up again later in the early church. There were some who were saying the Gentiles–that is, the non-Jews–had to keep all of the Jewish law in order to come into the church: “The Gentiles must be required to obey the law of Moses.” But the apostle Peter got it right when he said: “Why are you putting God to the test by placing a yoke on the neck of the disciples that neither our fathers nor we have been able to bear? But we believe that we will be saved through the grace of the Lord Jesus, just as they will.”

The law is a heavy yoke that you and I are not able to bear. Keeping all the commandments of God is an enormous weight, and we are not strong enough to lift it. The apostle Paul realized this about himself, as we heard in today’s Epistle from Romans 7: “For I do not do what I want, but I do the very thing I hate. . . . For I know that nothing good dwells in me, that is, in my flesh. For I have the desire to do what is right, but not the ability to carry it out. . . . For I do not do the good I want, but the evil I do not want is what I keep on doing. . . . Wretched man that I am! Who will deliver me from this body of death?”

Paul himself had been a Pharisee. He knew something of the burden of the law. And here we can hear him straining under that heavy weight. He knew now that he was nowhere near good enough or strong enough to carry that load. He couldn’t do it. And if Paul couldn’t do it–and he was about as zealous and religious as they come–guess what? You and I can’t do it either.

What Paul describes here is the battle raging within every Christian: our failure to do all that we know we should do, and our corresponding tendency to do things we know we ought not do. We keep falling in the ditch on either side: sins of commission, actively doing the wrong, and sins of omission, our failure to do the right. This battle within us, the conflict between the new man who wants to obey God and the Old Adam who serves only self–this struggle and how it weighs upon our conscience–this too is the labor and the heavy burden that we bear. 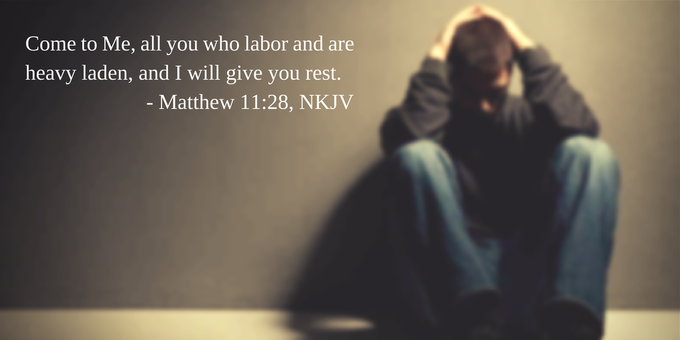 Jesus Christ is the only one who can do this for you. He is the only one strong enough to carry the load that is the weight of the law. That’s what Jesus did. He lived the righteous life we do not live. He kept God’s law completely, in our place. His love for God was total, his love for the neighbor complete. Nothing was left out or fell short of the mark.

Then Jesus did something more. The crushing weight of the law, the sentence it pronounces on sinners, the verdict it declares, “Death to all those who do not do all that is written therein”–the death sentence we deserve, Jesus suffered in our stead. The sinless Son of God died the death of sinners, hanging on a cross, suspended between heaven and earth, mocked by men and abandoned by God. That is a heavy load to bear. There is nothing heavier.

In ancient Greek mythology there was a fellow named Atlas. His job was to carry the world on his shoulders. Well, dear ones, Jesus is our real-life Atlas. He carries the weight of the world on his shoulders. The heavy, unbearable weight of the whole world’s sins. “Behold, the Lamb of God who takes away the sin of the world.” That is the load Christ carried to the cross. He lifts it off of your shoulders and puts it on his own. 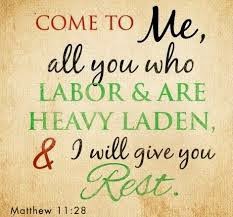 My friends, the weight of your sins has been lifted, the load has been removed. That heavy load is gone, just as surely as the huge, heavy stone was rolled away on Easter morning. The heavy millstone of judgment, the enormous tombstone of death–these have been rolled away and thrown into the depths of the sea. Sin is forgiven, death is destroyed. Jesus lifts these burdens from you. And now he says to you, in warm, inviting tones: “Come to me, and I will give you rest.” Quit struggling on your own. Lay down your burdens at foot of the cross. “See my nail-pierced hands. I have done the job for you. Now you are free.”

In his book, “Pilgrim’s Progress,” John Bunyan tells the story of a Christian on a journey, carrying a large bundle on his shoulders. He arrives at a place somewhat elevated above the surrounding area. On that hill there stands a cross, and below the hill there is a grave. As the man comes to the top of the hill with his heavy burden, the load is suddenly released from his shoulders. It drops to the ground, rolls down the hill, and disappears into the empty grave. That is a picture of what Christ has done for us. We labor along, carrying a heavy load. The cross appears before our eyes. We lay our heavy load down there, and it is rolled away.

What a relief! What rest for our souls! St. Augustine once prayed to God, “Thou hast formed us for thyself, and our hearts are restless till they find rest in thee.” Here then is the rest you need. Jesus Christ is our Sabbath rest. He gives us rest and refreshment from our labors.

“Come to me, all who labor and are heavy laden, and I will give you rest.” Come to Jesus, and find the rest you need. Rest for the weary, those worn out by their own sins and the effects of sin we all experience in this fallen world. Rest for the weary, Christians who are troubled by the internal battle within, as the new man has to contend with the old sinful flesh. Rest from all the burdens we feel–sadness and pain, sorrow and loss. 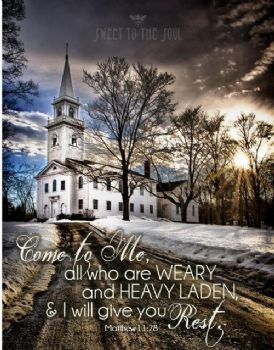 Jesus is speaking to you today: “Come to me, and I will give you rest.” Yes, come and lay your burdens down. Find true spiritual rest in Christ, both for this life and for the age to come. We have this rest now–peace with God and the forgiveness of sins. And we have the sure hope of eternal rest in the promised land of heaven.

I heard the voice of Jesus say,
“Come unto Me and rest;
Lay down, thou weary one, lay down
Thy head upon My breast.”
I came to Jesus as I was,
So weary, worn, and sad;
I found in Him a resting place,
And He has made me glad.