You see, the church confesses three ecumenical creeds: the Apostles’ Creed, the Nicene Creed, and the Athanasian Creed. They are called “ecumenical” creeds, because they are held all across Christendom.

The Nicene Creed was adopted in the year 325 at the Council of Nicaea as a corrective response to the heresy that was then threatening the very foundation of the Christian faith. The heretic Arius was gaining a lot of followers by saying about Christ that “there was a time when he was not.” In other words, Arius denied the divinity of Christ and said that he was a created being and not fully God. But that false teaching would undermine and destroy the entire Christian faith, for if Jesus were only a man and not true God also, he could not save us from our sins. Therefore, the Council of Nicaea came out with a creed that strongly emphasized the divinity of our Lord Jesus Christ, “the only-begotten Son of God, begotten of His Father before all worlds, God of God, Light of Light, very God of very God, begotten, not made, being of one substance with the Father; by whom all things were made.” And so the Nicene Creed marked off orthodox Christian teaching over against dangerous heresy. This is why we generally confess the Nicene Creed during the Divine Service, to say that we all here are in agreement with the true faith, before we come to the Lord’s altar.

So that’s the Nicene Creed, which will lead us in turn to the Athanasian Creed. At the Council of Nicaea in 325, there was one man in particular who stood out as the most able and staunch defender of the faith, and that was the bishop of Alexandria, a man by the name of Athanasius. St. Athanasius was a great theologian and a real hero of the faith, who thought deeply and wrote persuasively on the person of Christ and on the doctrine of the Trinity. So while St. Athanasius himself may not have written the Athanasian Creed, it does reflect his influence and is named in his honor.

And this creed is quite meticulous–painstakingly so–in the careful distinctions it draws among the three persons of the Trinity. For example, the section we read that goes: “the Father uncreated, the Son uncreated, the Holy Spirit uncreated; the Father infinite, the Son infinite, the Holy Spirit infinite; the Father eternal, the Son eternal, the Holy Spirit eternal. And yet there are not three Eternals, but one Eternal, just as there are not three Uncreated or three Infinites, but one Uncreated and one Infinite.” Whew! Now there are some heavyweight terms, thrown together in close proximity. And there is sentence after sentence like that, all these careful distinctions. And the effect can seem rather mind-numbing.

But is it? Should we dismiss the Athanasian Creed as some old relic of incomprehensible theological jargon? No, I think not. On the contrary, the doctrine that this creed confesses–the reality of the triune God it confesses–is absolutely essential to our salvation. 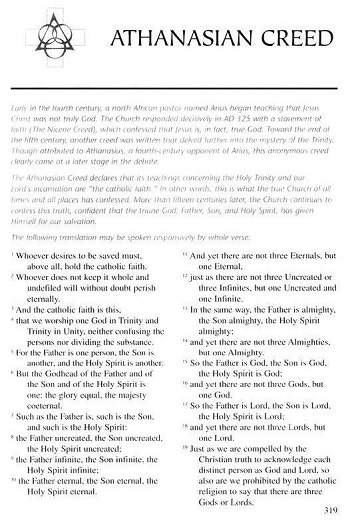 So if you’ll turn back now to page 319, let’s take another look at the Athanasian Creed. It begins, in verses 1 and 2: “Whoever desires to be saved must, above all, hold the catholic faith. Whoever does not keep it whole and undefiled will without doubt perish eternally.”

First of all, don’t be afraid of the word “catholic.” It’s a good word. The word “catholic” literally means “according to the whole.” In this context, it refers to the orthodox Christian faith, as it has been taught rightly in all times and in all places. It does not mean the Roman Catholic Church, headed up by the pope. “The catholic faith” is the same thing as saying “the Christian truth.” So we in our church hold the catholic faith. And it’s a good thing we do.

Continuing in verse 3: “And the catholic faith is this, that we worship one God in Trinity and Trinity in Unity, neither confusing the persons nor dividing the substance.” Now the whole long section that follows, verses 4-26, is designed and structured to balance these two aspects of God: the Trinity of persons, in verses 4-18, and the Unity of substance, in verses 19-26. So there are three distinct persons in the Godhead: the Father, the Son, and the Holy Spirit. And yet there is only one God. Three persons, one God. One God, three persons. This is how God has revealed himself to us in Holy Scripture. The Trinitarian nature of God is a truth that transcends the ability of our finite reason to comprehend. How this can be? But it is. This is who God is. And this is the God who saves.

How does God save? This is where the section on Christ comes in, verses 27-39. This is the heart of the Gospel: the person and work of Christ, the only Savior of mankind. He is the eternal Son of God, who came in the flesh, incarnate, both true God and true man. That is the person of Christ. What about his work? In verses 36 and 37, the Athanasian Creed reads much like the Apostles’ and Nicene. It says that Christ “suffered for our salvation, descended into hell, rose again the third day from dead, ascended into heaven, and is seated at the right hand of the Father, God Almighty, from whence He will come to judge the living and the dead.”

Only Christ, the God-man Savior, could do this great work for you! It took the death of God’s only Son to cover the sins of the world. His holy blood, poured out on Calvary’s cross, is the great price that paid for your forgiveness. Your sins are wholly atoned for, covered completely, washed away forever. Jesus paid it all. Take refuge in him. And by his victorious death and resurrection, Christ has conquered death and the grave for you! He has defeated the forces of hell, proclaimed his victory there. Jesus has risen from the dead, ascended into heaven, and now is seated at God’s right hand, the place of all honor and authority. Christ your Savior now is governing all things for the good of his church. The world is not spinning out of control. No, it is heading toward a goal: the end of this age, when Christ will return and inaugurate the age to come. And meanwhile, Jesus is with us all the days until then.

When Christ comes again and he judges the living and the dead, what will happen on that day? The Creed tells us, verses 38 and 39: “At His coming all people will rise again with their bodies and give an account concerning their own deeds. And those who have done good will enter into eternal life, and those who have done evil into eternal fire.” Don’t let this scare you. Let this give you hope! For you will stand acquitted on the Day of Judgment, not guilty for Jesus’ sake. Your sinful deeds will not be recounted on that day. For they have been forgiven, remembered no more. Only your good works will be cited, as evidence of a living faith. Remember the story of the sheep and the goats, from Matthew 25. It is faith in Christ that will save you, a faith given to you as a free gift in your baptism and nurtured every week here by Word and Sacrament.

“At His coming all people will rise again with their bodies and give an account concerning their own deeds. And those who have done good will enter into eternal life, and those who have done evil into eternal fire.” Again, don’t let this scare you. Let this give you hope! For here is the resurrection of the body and eternal life. This is the goal we are headed for, and it is already guaranteed by the sure promise of God.

The conclusion, verse 40: “This is the catholic faith; whoever does not believe it faithfully and firmly cannot be saved.” But for you who do believe this catholic faith, you will be saved! You will be raised to life, with a glorious immortal body, in a restored creation, and we will live forever with our God and with all his saints of all times and all places.

So is this Athanasian Creed so “incomprehensible”? No, I’d say the doctrine it confesses is pretty indispensable! What is incomprehensible, in the best sense of the word, is the great mystery of the triune God and his amazing love for us! “Oh, the depth of the riches and wisdom and knowledge of God!” Oh, the breadth and length and height and depth of his love! “Blessed be the Holy Trinity and the undivided Unity. Let us give glory to him because he has shown his mercy to us.”