Today is the Feast of Pentecost, a major festival in the Christian church year. Today we celebrate the giving of the Holy Spirit, whom our ascended Lord Jesus Christ poured out on his church, as we read about in the second chapter of Acts. That was the beginning of the worldwide spread of the gospel, and you and I are here today as Christians because of what began on that first Pentecost.

You see, there were three main festivals in the Jewish year, in the Hebrew calendar, when all pious Jews from all over would travel to Jerusalem and go to the temple to fulfill their religious duty. They were these three: the Feast of Passover, in the early spring; the Feast of Weeks, also called Pentecost, which occurred seven weeks, or fifty days, later in the spring; and then in the fall, the Feast of Tabernacles or Booths. These three are called the pilgrimage festivals, because they called for Jews to make that pilgrimage to Jerusalem.

Now at this point you’re probably saying, “Who cares? That stuff’s ancient history, and besides which, I’m not even Jewish! What does all that have to do with me?” Well, the answer is, a lot! As we’re about to find out, when you see how these Old Testament feasts are fulfilled in Christ. When you see how the Feast of Tabernacles and the Feast of Passover come to fruition now in the Feast of Pentecost, then you will rejoice in the good gifts that God gives.

Our text today is the Holy Gospel from John 7. It consists of words that Jesus spoke at the Feast of Tabernacles. So you might be wondering why this is selected as a text for Pentecost. Well, the reason is that in this text Jesus is predicting what will happen on the Feast of Pentecost. So this morning we’re going to go on a pilgrimage “From Tabernacles to Pentecost,” and we may make a stop at Passover on the way.

But our starting point this morning is the Feast of Tabernacles. It’s called Tabernacles because it commemorated the time when the Israelites traveled through the wilderness and lived in tents, or tabernacles, on their way to the Promised Land. During those years of wilderness wandering, the Lord God graciously provided for his people by giving them food and drink, even in a dry and desolate desert. God miraculously supplied them with bread from heaven and water from a rock.

Water from a rock. Do you recall that incident from the time of Moses? The Israelites were out in the wilderness, they were thirsty, and they were grumbling that there was no water for them to drink. So the Lord told Moses to strike a rock with his staff, and water would come out of it, and the people would drink. That’s what happened: Moses struck the rock, water came out, and the people drank. It even happened a second time, later on, when once again the Lord supplied them with water. God was graciously providing for his people while they wandered in the wilderness.

The Feast of Tabernacles, then, was a time when the Jews gathered in Jerusalem to commemorate that great provision. Tabernacles was a week-long festival, with various ceremonies and rituals taking place throughout those days. One of the rituals involved water. Each morning, water was drawn from the Pool of Siloam and carried in a golden pitcher to the temple. The water was poured out, the trumpets would sound, and the people would sing the words of Isaiah, “With joy you will draw water from the wells of salvation.” 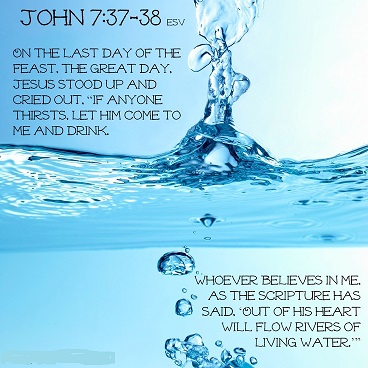 Well, that’s where we meet Jesus in the Holy Gospel for today. He’s in Jerusalem for the Feast of Tabernacles. The water ceremony was vivid and fresh in people’s minds. That’s where we pick up the text: “On the last day of the feast, the great day, Jesus stood up and cried out, ‘If anyone thirsts, let him come to me and drink. Whoever believes in me, as the Scripture has said, “Out of his heart will flow rivers of living water.”’”

What is Jesus saying here? He’s saying: “If you think the way the Lord provided water for our forefathers in the wilderness was great, guess what? There’s something even greater in store. That water satisfied their thirst for a time, but I have water that will satisfy your thirst for eternity. Are you thirsty? Come to me and drink.”

And when you come to Jesus and drink, when you believe in him, that living water will spring up in you and flow out from you and through you to others. That’s the work of the Spirit, that’s what Pentecost will be about, and that’s why this Feast of Tabernacles text was chosen as the Gospel for the Feast of Pentecost. As the gospel-writer adds: “Now this he said about the Spirit, whom those who believed in him were to receive, for as yet the Spirit had not been given, because Jesus was not yet glorified.”

So we’re heading toward Pentecost, but we’re not there yet. We’ve got one more feast to stop at before we get there–that’s Passover–and it’s hinted at in the words, “because Jesus was not yet glorified.” Jesus will be “glorified,” in a very unexpected way, at Passover.

Now I should explain Passover. What was Passover in the Old Testament? Like Tabernacles, Passover likewise was associated with the Lord’s deliverance of his people at the time of Moses. Israel was in Egypt-land, in slavery, and the Lord acted to bring them out from that bondage. The Lord brought a series of plagues upon Egypt, to convince Pharaoh to let his people go. The last plague was the death of the firstborn. That plague would have struck the homes of the Israelites, too, except that the Lord instructed Moses to have the people sacrifice a lamb without spot or blemish and spread its blood on their doorposts. The blood of the lamb would be a sign, death would pass over their homes, and the people would be spared. That night would be their exodus from Egypt, from the land of their slavery.

The Feast of Passover, then, was how the Jews remembered that great deliverance. And it was at a Passover, many years later, that the feast would find its fulfillment. Jesus was with his disciples, and at the end of the Passover meal, he instituted something new and greater: “Take eat, take drink. This is my body, this is my blood, given and shed for you for the forgiveness of sins.” Then he went out and was betrayed and arrested and delivered over to death, even death on a cross. The only Son of God becomes the Lamb of God, who takes away the sin of the world. His blood marks our doorposts, and we are spared. Death passes over.

And strangely enough, this is how Jesus is glorified. It brings glory to Jesus to die for the sins of the world, to die in shame even though he is sinless. God is glorified chiefly in showing mercy, and this is his greatest act of mercy: giving his Son into death for your salvation. No greater glory is there than in the revelation of divine mercy in the cross of Jesus Christ.

And when Jesus died on that cross for your salvation, and he gave up his spirit, and the soldier pierced his side with a spear, from out of his side came a sudden flow of blood and water. Truly of Christ it can be said, “Out of his heart will flow rivers of living water.” For his pierced side, given into death, is the source of your eternal life. The Holy Spirit, the Lord and giver of life, who proceeds from the Son, flows out from Christ the Crucified and gives you life.

At Tabernacles, Jesus was not yet glorified. At Passover, Jesus is glorified, by his death and resurrection, to be followed by his ascension into heaven forty days later. Ten days after that, fifty days later, we finally come to Pentecost, when Jesus pours out the Spirit on his church.

But again, we want to back up and find out the Old Testament background for this feast. Pentecost was also called the Feast of Weeks, coming, as it did, seven weeks after Passover. It fell in mid-to-late spring, the time for the early harvest. The Feast of Weeks, or Pentecost, therefore celebrated the abundance of blessing the Lord bestowed on Israel when they settled in the Promised Land. It was a land flowing with milk and honey, with abundant crops, and Pentecost or Weeks rejoiced in that great abundance from God. People came to the temple and gave thankofferings of grain from out of the early harvest. This was called the firstfruits offering, since the firstfruits signaled that there was much more to come.

So that’s where we are on the Day of Pentecost, in Acts chapter 2. We’re in Jerusalem, with the multitudes of Jews who had come on pilgrimage from all the nations where the Jews had been scattered: “Now there were dwelling in Jerusalem Jews, devout men from every nation under heaven. . . . Parthians and Medes and Elamites and residents of Mesopotamia, Judea and Cappadocia, Pontus and Asia, Phrygia and Pamphylia, Egypt and the parts of Libya belonging to Cyrene, and visitors from Rome, both Jews and proselytes, Cretans and Arabians.”

What does this mean? It means that God is now going to have a firstfruits offering from among these nations. The harvest is ready to be brought in. It’s about to start. The Spirit is poured out on the disciples. Peter starts preaching. This is how the harvest will be gathered. Peter begins telling them the mighty works of God. He will make known to them what God has done for them in Christ, so that “everyone who calls upon the name of the Lord shall be saved.”

Friends, this is what the Feast of Pentecost is all about. It’s about the gospel going out to all the world, calling people to repentance and faith in Christ–calling you to repentance and faith. From Tabernacles to Pentecost, with Passover along the way, the message is still the same: The rivers of living water are flowing out from Christ to you! Come to Jesus and drink.