The most popular psalm in the Psaltery is Psalm 23 where David begins with the words, “The LORD is my shepherd, I shall not want.”  Jesus calls himself the good shepherd.  St. Peter calls Jesus the shepherd and bishop of our souls.  And here before us are the words of God spoken by the prophet Ezekiel.  God calls himself the shepherd of Israel. 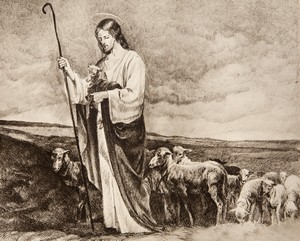 When God calls himself a shepherd and he calls us his sheep, that is obviously picture language.  We are not animals covered with wool running around on four legs and eating grass.  But picture language signifies reality.  The imagery of a shepherd and his sheep describes the relationship between Christ and his church.  Indeed, here is how we Lutherans define the church in the Smalcald Articles, one of our written confessions of faith:

Thank God, a seven-year-old child knows what the church is, namely, holy believers and sheep who hear the voice of the Shepherd.  So children pray, “I believe in one holy Christian church.”  Its holiness . . . consists of the Word of God and true faith.

The word of God and true faith – this is what the picture of the shepherd and the sheep means.  The shepherd is identified in our text as the Lord GOD.  The sheep are those who hear his word and believe it.  But they have been scattered.  It was a dark and cloudy day.  They wandered off, not knowing where they were going.  The shepherds who had been appointed to watch over them did not teach them the true word of God.  They permitted idolatry to enter into the church, and they compromised the teaching of the Lord GOD with the teaching of the Baals and Asherahs, gods and goddesses of fertility.  They were willing to tolerate popular false teaching instead of opposing it with the word of God.  They enriched themselves without feeding the sheep God’s word.  And so the sheep wandered off and got lost.

It works on both sides.  The people ask for false teachers.  St. Paul warns Timothy of this in 2 Timothy 4:4-5

For the time will come when they will not endure sound doctrine, but according to their own desires, because they have itching ears, they will heap up for themselves teachers; and they will turn their ears away from the truth, and be turned aside to fables.

On the other side, there are preachers who are in it for the money, or the prestige, or for whatever honor they think they can get from men.  Earlier in this chapter of Ezekiel, God speaks to those unfaithful shepherds.  Ezekiel writes:

Last week we heard from Jesus the basic requirements of his preachers.  They are to preach the law and the gospel.  The law exposes our sins and tells those who will not repent and acknowledge their sins to God that their sins are not forgiven and will not be forgiven unless and until they repent.  The gospel announces to us the forgiveness of all our sins and tells us that, on account of the obedience, suffering, death, and resurrection of the Lord Jesus, God has removed our sins from us as far as the east is from the west.

What does this mean?  It means that if you are to be a sheep of the good shepherd, if you are to be a Christian, you must first acknowledge yourself to be lost, broken, and sick.  You admit your sins.  You are spiritually helpless without the good shepherd to guide you.  You cannot find your way back to safe pasture.  You’re weak and wholly dependent on the shepherd to take care of you.

That’s why you come to church.  That’s why you read your Bible.  That’s why you seek out instruction in God’s word at every available opportunity.  It’s because you are spiritually needy.  These are the sheep the good shepherd cares for.  They don’t make themselves strong and healthy.  He does.  All the sheep do is to listen to the voice that will lead them to food and safety.

But they are not.  Listen to what the Lord Jesus says to the church in Laodicea, as recorded by St. John in Revelation 3:17,

Because you say, ‘I am rich, have become wealthy, and have need of nothing’—and do not know that you are wretched, miserable, poor, blind, and naked—

The sheep who have nothing to confess, who know who they are and where they are going, who haven’t ruined anything, haven’t made any mistakes, and live lives of supreme confidence in themselves – these are the sheep that Jesus will destroy.

Jesus died for sinners; not for righteous people.  Jesus calls sinners to himself; not people who can handle life all by themselves.  The shepherd and bishop of our souls is he who bore all our sins in his body on the cross.

Now think of that, whenever you begin to decide that you don’t need to confess your sins and receive Christ’s absolution; whenever you begin to think that you can live without the Lord’s Supper; whenever you think that perhaps the voice of Jesus here in this place is no longer what your soul needs.  Think of the fact that your shepherd – he whose voice sounds forth in his church – is the One who laid down his life for you, bore your sins in his body, suffered for you, and died for you.  Who knows your sins better than the One who bore them in his own body?

When Jesus searches for you and finds you, he knows you before you know him.  He knows all of your temptations.  He understands why you give in to temptation, why you stumble and fall, and how you get yourself trapped in your own failures.  And he is the one whose voice, whose very words, will deliver you from your own folly.

Those who refuse to acknowledge their spiritual need are not Christians.  The fat and sassy sheep that have no care in the world are headed for slaughter.  If they don’t find their rest and spiritual security in the wounds of Jesus who died for them, they will surely look elsewhere and everywhere else but in the voice of Jesus they will find lies that will deceive them, mislead them, and in the end, torment them.  Notice that the prophet doesn’t speak of sheep somewhere in between the sick and the healthy.  Only the sick can be saved.  The healthy are doomed.

When God spoke to his people through the Old Testament prophets like Ezekiel, he spoke to the nation of Israel or the nation of Judah.  In fact, he was speaking to his sheep.  He has always spoken to his sheep, that is, the believers, that is, the sinners who trust in the blood and righteousness of their good shepherd for the forgiveness of their sins and listen to his voice and follow him.  The church has never been a political entity.  It has always been a spiritual people, bound together by the word of God in one faith, mind, and understanding.

These beautiful words of God spoken through Ezekiel the prophet do not describe a future gathering of the Jews into one nation, as the millennialists imagine.  The land of Israel that the prophet describes is nothing else than the Holy Christian Church on earth, that flock of Christian believers who hear the voice of their shepherd, Jesus.

They are a holy flock.  Their sins are washed away by Christ’s blood.  They are united as one, even though we cannot see their unity.  God sees it.  They share the same faith in the same Savior and receive the save forgiveness.  They are cared for by the same shepherd.  They hear his voice and through that voice their Savior Jesus gives them eternal life.  They will never perish, and no one will snatch them out of their shepherd’s hand.  Amen