I’m guessing by now you’ve picked up on the theme of the day. You’ve heard it throughout the service so far. For example, in the Introit, the words of Jesus: “I am the good shepherd. I know my own and my own know me, and I lay down my life for the sheep.” In the Psalm: “The Lord is my shepherd.” In the Holy Gospel, where Jesus calls himself “the shepherd of the sheep.” In the Hymn of the Day, “The King of Love My Shepherd Is.” Yes, no doubt, today is the Sunday in the Easter season we call “Good Shepherd Sunday.” The readings and the hymns and the prayers all revolve around the image of Christ as the Good Shepherd.

And it’s a good thing he is! It’s a good thing that Jesus is our Good Shepherd, isn’t it? For without him, where would we be? Not in a good place, I can tell you! We sheep would be lost and vulnerable and easy prey for predators. We would have no one to find us and bring us back when we stray. We would have no one to rescue us and save us when we suffer. But with our Good Shepherd to guide and guard and protect us, we are safe and sound and able to graze in green pastures. That’s the big difference that having Jesus as our Shepherd makes. And so our theme for this message: “The Good Shepherd for Straying and Suffering Sheep.”

And for our text, I’m going to base the message on the Epistle for today, from 1 Peter 2. There Peter writes to Christians who were suffering–suffering persecution, especially–and he points them to Christ. Likewise, Peter points them to Christ when he reminds them that they had been straying like sheep but now have been brought back to the care of the Good Shepherd.

Notice, the image of Christ as the Good Shepherd becomes all the more beautiful and precious to us when set against all the danger and darkness we would face without him. We saw this in the other readings also. In Psalm 23, those “green pastures” become all the greener because they stand in contrast to the “valley of the shadow of death.” In John 10, Jesus describes himself as the Shepherd who comes that we may “have life and have it abundantly,” over against the thief who “comes only to steal and kill and destroy.” These vivid contrasts make the image of the Good Shepherd all the more appealing and attractive.

So it is in 1 Peter. The reference to Christ as the Shepherd and Overseer of our souls comes right after a reminder that we were like sheep going astray. That contrast two makes our Shepherd all the more precious to us. When we realize how lost we would be on our own, we appreciate that much more deeply the fact that we have a Shepherd to guard and guide us.

Besides our straying, there is another aspect that makes us appreciate our Shepherd all the more. And that is our suffering. The unpleasant reality is that Christians suffer in this world, and sometimes it is precisely because we are Christians. But when we do suffer in that way, it’s reassuring to know that we have a loving Shepherd who looks out for us and takes care of us. Again, Jesus is the Good Shepherd for sheep who stray and sheep who suffer.

Sheep who suffer. Peter writes to suffering Christians and says: “This is a gracious thing, when, mindful of God, one endures sorrows while suffering unjustly. For what credit is it if, when you sin and are beaten for it, you endure? But if when you do good and suffer for it you endure, this is a gracious thing in the sight of God. For to this you have been called, because Christ also suffered for you, leaving you an example, so that you might follow in his steps.”

Now perhaps our first problem in relating to this text is that we Christians in America don’t suffer that much these days, at least not in comparison to Christians in other parts of the world or at other times in history. Most of us are not used to receiving a beating, at any rate. But maybe we do experience some degree of suffering, although not quite that intense. For instance, people may exclude us from their circle of friends. They might make derogatory remarks about us behind our back, or even to our face.

The first question to ask yourself, then, when you experience suffering would be this: Am I suffering because of something wrong that I did? Did my own sin bring this on me? Was I being a thoughtless jerk, and now somebody is mad at me? Did I fail to study for a test, and now I’m getting a bad grade? Was I driving under the influence, and now the policeman is giving me a ticket? In those cases, it’s not that I’m being persecuted because I’m a Christian. No, it’s because I was a jerk or I failed to study or I was drinking and driving. Those are the reasons I’m suffering. Sometimes suffering is simply the natural consequence of our own bad behavior. If that’s the case, then I need to repent of the wrong I have done, confess my sin, ask God’s forgiveness–and that of the person I have offended–and seek to do better.

But there are also times when Christians suffer precisely because we do belong to Christ. We encounter suffering, not because of any misbehavior on our part, but because of our good behavior. There are people who will belittle your good behavior in order to make themselves feel better about their bad behavior. You don’t go along with the crowd, when the crowd is cheating or shoplifting or gambling or getting drunk. And so they put pressure on you to conform to the group. If you don’t, then you’re rejected and ridiculed. That is unjust suffering.

What do you do in that kind of situation? How should we handle unjust suffering when it comes our way? St. Peter answers that question by pointing us to Christ. Suffering sheep look to their Shepherd for their example. Peter says that Christ suffered, “leaving you an example, so that you might follow in his steps.” The Greek word translated here as “example” was used to refer to a piece of writing or a drawing that’s placed under another sheet and then is traced over on that upper sheet. So Jesus Christ, in his suffering, is our perfect model to copy. How Jesus acted when he suffered unjustly is how we are to suffer too. Then there is the phrase, “that you might follow in his steps.” The idea is that we would follow his tracks. We step into the footprints where Jesus already led the way. Christians follow Christ on his way of sorrows. We follow the path of his example.

What Jesus did do, Peter says, was to entrust himself to God: He “continued entrusting himself to him who judges justly.” Even if the whole world did not make the right judgment in his case, Jesus knew that God would judge him rightly. God would vindicate his innocent and righteous Servant. God will see that justice is done in the end, even if it is not being done now.

Now it’s one thing to see Jesus as the example we ought to follow; it’s another thing to be able to actually do it. And on our own, we couldn’t do it. But God gives us the grace. Notice that twice in our text Peter says, “This is a gracious thing.” God gifts us with the grace and the strength and the ability to follow our Savior’s example. God’s grace enables us to bear up under and to endure suffering, knowing that God will ultimately save us and vindicate us and even reward us for the sake of Christ. This is not our own doing. “This is a gracious thing.”

This is a gracious thing, all the way from start to finish. God’s grace in Christ is what makes us Christians in the first place, and it’s what will enable us to endure, even to the end. And so when Peter talks about the suffering we endure, he takes us to Christ. He takes us to the cross. Suffering sheep look to their Good Shepherd. 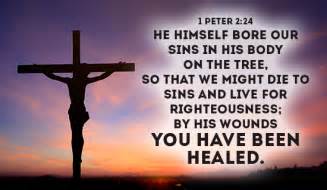 You see, when Peter writes about suffering, he cannot limit himself to only talking about Jesus as an example. Jesus is far more than an example. He is our Savior. That is the reason he suffered. Christ suffered “for you,” Peter says. “He himself bore our sins in his body on the tree.” On that tree, the cross of Calvary, the sinless Son of God took all our sins upon himself. And he did it for you. For you he bore those wounds in his hands and feet and side. For you the only righteous man who ever lived endured the most unjust suffering possible. For straying sheep like you and me, the Good Shepherd laid down his life. He laid it down on Good Friday, and he took it up again on Easter morning. Christ’s resurrection is the proof that what our Shepherd did in dying for the sheep is enough to overcome all our suffering and death. Jesus came that we may have life and have it abundantly, and he accomplished his goal abundantly.

“For you were straying like sheep, but have now returned to the Shepherd and Overseer of your souls.” Now we lost sheep have come home to our Shepherd. The contrast makes our Shepherd all the more dear to us. For we know where we would be without him–lost and straying and vulnerable to all the dangers that would otherwise do us in. But now we have a Shepherd, a strong Shepherd, one who cares for us. I think of that hymn stanza we sang:

Perverse and foolish oft I strayed,
But yet in love He sought me
And on his shoulder gently laid
And home rejoicing brought me.

Now we are safe, saved and safe for eternity, no matter what suffering we endure for the moment. Our Good Shepherd, the one who laid down his life for us, has risen from the dead and now is walking alongside us, guiding and guarding us as we travel through the wilderness of this world. He is the Shepherd and Overseer of our souls. He is watching out for us, looking out for our welfare.