Around this time of the year (Ascension and Pentecost), I hear a lot about Matthew 28 and how congregations need to engage more in missions. This is a good thing, I suppose. What’s unfortunate, however, is that white pastors guilt their white members into “discipling” more and reaching out to their ethnic neighbors. The pastor usually draws attention to how “white” the congregation is and how few “minorities” are in the congregation. Then come the statistics.

According to the Pew Research Center’s 2014 Religious Landscape Study, the LC–MS is the 3rd most white denomination in the United States (only after the ELCA and the National Baptist Convention). The LC-MS is 95% white. I’ve heard this statistic thrown around quite a lot in my District and even around the Synod. Here are some of the statements I’ve heard from other pastors: 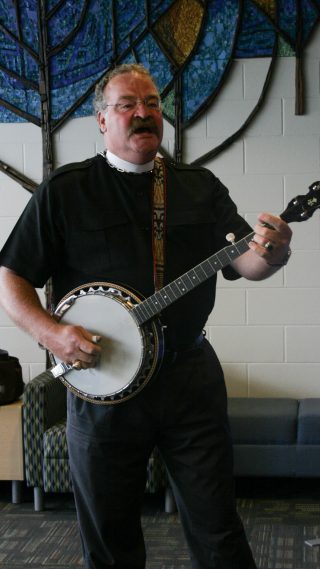 “Why are we one of the whitest denominations in all of America?”
• “We need to reach the lost, engage in missions, and diversify the Church.”
• “The Reformation was about doctrine; we need a reformation of practice and missions.”
• “We are good at being confessional, but bad at being missional.”
• “What can Lutherans learn from other cultures?”
• “The LC–MS cares too much about doctrine and not enough about people.”
• “Our church is too German.”
• “The LCMS is so white…our President plays the Banjo.” (Okay, I made this one up. But it’s pretty funny.)

Many quote these statistics in order to guilt trip churches to “do” missions. These statements are made to embarrass and shame the LC-MS for being too white. The white folk blush, hang their heads in shame, and carry this guilt for their congregation being “too white.” Apparently, if our churches are mostly white, then we’ve done something wrong because “Jesus isn’t white.” The LC–MS is 95% white. That’s not what Jesus would have wanted, right? That’s not fulfilling the Great Commission, is it?

Well, actually, it is. Why? Because Jesus isn’t white. When Jesus said, “Go therefore and make disciples of all nations, baptizing them in the name of the Father and of the Son and of the Holy Spirit,” (Matthew 28:19) He was talking about white people also. Sure, it’s not only what Jesus wants; but, it is, indeed, something Jesus wants. White people are part of the “all nations” in Matthew 28. This means when the church is filled with Germans, Norwegians, Anglo-Saxons, etc., it is a fulfillment of Matthew 28! They are just as much a part of the “all nations/ethnics/Gentiles” as are the Puerto Ricans, Chileans, Dominicans, Japanese, Africans, etc. Lutherans shouldn’t be ashamed that they are 95% white. They should rejoice that the Gospel has reached all nations, including them!

I am not white (although I was born in Elyria, Ohio). My father is a Chilean refugee and a LCMS missionary pastor, and my mother is a Puerto Rican. I love culture. I’m not too fond of American Culture. I don’t really like Casseroles and I don’t really care for the Green Bay Packers. Sorry, not sorry. I don’t like Football; I like Fútbol. I can eat burgers and fries, but I prefer Tostones, Mofongo, and Malta (by Goya™). I’m all for missions. But this white guilt needs to end. I know that I’ll probably be called a “Coconut”(brown on the outside, white on the inside) for saying this. But, I assure you, I am not. I’m not some self-loathing Hispanic who despises his own people and culture, who secretly yearns to become German (although I really do like German stuff, like “Füßbol,” “Bier,” und das Lied, “Du Du Liegst Mir Im Herzen,”).   I’m simply saying that Lutherans need to stop quoting these statistics and shaming the Germans and Scandinavians in their congregations for being German and Scandinavian.

Rather than be ashamed that there are so many Germans, Anglo-Saxons, and Norwegians in the churches, we should give thanks to God that His Word has been fulfilled. Pastors shouldn’t hang their heads in shame if their congregations reflect the demographics of their community or country. We shouldn’t look down on churches and the Synod because it is white.

We shouldn’t despise our Lutheran hymnody. Whenever we sing “German hymns,” this is a testimony to Matthew 28! We shouldn’t throw out the Lutheran Confessions because it’s “too German.” We should give thanks to God that He has caused one of these nations/ethnic ones to be so faithful to His Word! I give thanks to God for the diversity He has given to the Church! I don’t really care if a German or Scandinavian wrote the hymns or not. I give thanks to God that it is a beautiful and faithful confession of God’s Word! I sing it with all my heart because their confession is my confession also! Hispanics, Africans, and Asians are all capable of learning this wonderful hymnody. They are capable of learning the Liturgy! They don’t need a different hymnal or liturgy. Lutherans don’t need to be embarrassed by this treasure. We should rejoice that God has worked faith when and where He has pleased through the preaching of His Word. This pure confession is the mission!

I love seeing white people in Church.I’m glad to be a part. I’m constantly reminded that God’s Word has gone out and accomplished the purpose for which it was sent. If that means that the Synod is 95% white, then so be it. It doesn’t mean that the church is failing. It means that God’s Word has succeeded in bringing poor, miserable sinners to repentance and faith in Christ.