One of my favorite paintings is one we happen to have hanging in the hallway here at St. Matthew’s. I’ve brought it forward this morning, because it goes with the Gospel reading for today. The painting is called, in German, “Gang nach Emmaus,” “The Road to Emmaus,” by a 19th-century Swiss artist, Robert Zünd. I love this painting, because it really activates my imagination. You’re looking from a distance at Jesus walking with two disciples on the road to Emmaus, while Jesus is opening the Scriptures to them. You wish you could zoom yourself into the picture and listen in and walk along. What a Bible study that must have been!

And then, if you know the story from Luke 24, your mind goes ahead to when they arrive at Emmaus, and they ask Jesus, whom they do not yet recognize–they ask him to stay, and he breaks bread with them at table. Then their eyes are opened, and they recognize him as Jesus, risen from the dead, and they marvel at what had just happened.

But first let’s go back to back then. What was it like for those two walking on the road before Jesus joined them? It was a Sunday afternoon, and these two are on their way home from Jerusalem. They had been there for the Passover celebration, and now they’re going back to the town of Emmaus. But they’re sad, confused, and discouraged. Their faces are downcast. You see, their master, Jesus, had been crucified just a couple of days earlier, on Friday. They had been followers of Jesus, among his larger group of disciples. So naturally that’s all they can think about, the tragic events of the last few days.

All of a sudden a stranger catches up to them and joins them as they walk. Of course, we know it’s Jesus. But they don’t. “Their eyes were kept from recognizing him.” God was keeping them from recognizing Jesus at this point; he has something for them to learn first. So the stranger asks them what they’re talking about. They’re surprised he doesn’t know all the things that have happened in Jerusalem the last few days. “What things?” he asks. They fill him in: “Concerning Jesus of Nazareth, a man who was a prophet mighty in deed and word before God and all the people, and how our chief priests and rulers delivered him up to be condemned to death, and crucified him. But we had hoped that he was the one to redeem Israel.”

These disciples had their hopes set on Jesus, but now those hopes were dashed, their dreams were shattered. All their hopes had ended. Because Jesus was dead. He had been crucified, no less, before he could do anything to achieve the goal they had wanted him to accomplish. “We had hoped that he was the one to redeem Israel.” But now who would deliver their nation from the hands of the Romans? Who would lead their nation to glory? No one, it seems, at least for the foreseeable future. These two men felt like God had let them down. How long, O Lord, how long before the promised Messiah finally arrives? Apparently, it must not have been Jesus, because he didn’t get the job done.

But the stranger rebukes them: “O foolish ones, and slow of heart to believe all that the prophets have spoken! Was it not necessary that the Christ should suffer these things and enter into his glory?” Jesus rebukes them for not recognizing what had been there under their nose all along. The Scriptures–the part we call the Old Testament–the Scriptures had been telling them all along what would happen to the Messiah, but they had missed it. Just like everybody else, they didn’t get it. They were looking for another kind of Savior, one that fit their own expectations. They were certainly not looking for a Messiah who would be rejected by their own religious leaders. They were not expecting a Messiah who would have to suffer and die in shame and weakness.

So Jesus then takes them through the Scriptures, so they can see what they’ve been missing. Yes, what a Bible study it must have been! What Scriptures did he use? Jesus could have taken them to the stories of Moses, Elijah, Jeremiah–prophets who spoke God’s word to God’s people and yet were rejected. He most surely would have taken them to Isaiah 53, about the Suffering Servant: “He was despised and rejected by men; a man of sorrows, and acquainted with grief.” Jesus may have taken them also to Psalm 22, the cry of the righteous sufferer: “My God, my God, why have you forsaken me?” This stranger on the road opened up the Scriptures to them, so they could see that what had happened to Jesus actually was God’s plan, that it had been prophesied, that it was necessary that the Christ should suffer these things. 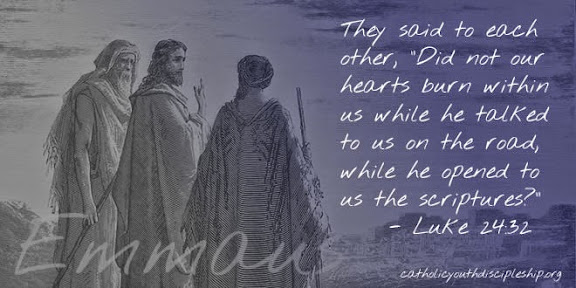 Those same Scriptures tell us why it was necessary that the Christ should suffer and die. Beginning back in Genesis 3, God told Adam and Eve that in the very act of the serpent striking the woman’s seed in the heel, that one would strike the serpent in the head and thus destroy his power. Then there are all the Scriptures where it takes a death, the shedding of blood, to make a sacrifice for sin. Again, think of Isaiah 53: “He was wounded for our transgressions; he was crushed for our iniquities. . . . The Lord has laid on him the iniquity of us all.”

Therefore any preaching that does not have as its core a suffering Christ is not Christian preaching. Any church that simply doles out “principles for living” and panders to itching ears–oh, they may throw in a little Jesus on the side–but a church that turns the Divine Service of Word and Sacrament into a manmade show of performance and entertainment, a church that replaces the Passion of Christ with the programs of men–such a church, however successful it may seem, is going in the wrong direction. The church that does not have Christ crucified at the center of its worship and preaching and congregational life–that church has left the Emmaus road and has taken a wrong turn.

The Emmaus disciples had been looking for a “successful” Messiah, as they envisioned it. Therefore they thought things had turned out rather badly, that this whole Jesus enterprise was a disaster, a failure. They had hoped that Jesus would be the one to redeem Israel, and because he died, they thought he had failed. Little did they realize, it was precisely in dying that he would redeem Israel! This is how Jesus has redeemed the whole world! It is a redemption far greater, far different, than they were expecting. With his holy precious blood and his innocent suffering and death, Jesus Christ has redeemed us lost and condemned persons. He has purchased and won us, rescued us and set us free, from all our sins, from the death that sin brings, and from the enslaving power of the devil. Our Redeemer died that we might live–really live, now and forever–just as he is risen from the dead, lives and reigns to all eternity.

All that the Emmaus disciples knew as they headed down the road that day was that Jesus died, and they didn’t know why. “This is now the third day since all this sad business took place. Oh, some of our women went out to the tomb this morning and found it empty, and they came back with some wild story about Jesus being alive. But who can believe that?” You and I, though, we know that the women’s report, as amazing as it sounds, is true. It is true! Jesus is alive! God has vindicated his righteous Messiah. He’s walking right beside them on the road, and they don’t even realize it. But soon they will.

The three travelers come to the town, to Emmaus. It’s getting late in the day. “Stay with us, sir. Abide with us. Come into our home and be our guest for a while. Come, eat with us.” So the stranger enters their house. But while he is at table with them, the guest becomes the host! In some ways, what Jesus does here at this table is very much like what he had done in Jerusalem just a few nights earlier: “He took the bread and blessed and broke it and gave it to them.” And so now, in Emmaus, it is in the breaking of the bread that their eyes are opened and they recognize Jesus for who he is.

In so doing, Jesus sets the pattern for the church. First there is the teaching, and then there is the eating. The opening up of the Scriptures and the breaking of the bread. This is what the church has always done, from the very first days of the church, when we gather together on the first day of the week. The Word and the Sacrament, on the Lord’s Day, in the presence of Christ. The preaching of the Gospel, the good news of salvation. Christ’s Body and Blood, given and shed for you for the forgiveness of sins. Today, as on every Sunday, Jesus is here among us, opening the Scriptures and breaking the bread. Emmaus happens every Sunday.

“And their eyes were opened, and they recognized him. And he vanished from their sight.” Ironic, isn’t it, that as soon as their eyes are opened, he vanishes from their sight. But that’s the way it is for us Emmaus disciples. We walk by faith and not by sight. “Blessed are those who have not seen and yet believe.” Jesus opening the Scriptures to us and breaking the bread for us–that will be enough. We recognize Jesus here in the means of grace.

And so our eyes are opened and our hearts are burning, because Jesus, our risen Lord, is here today, opening the Scriptures and breaking the bread. Jesus takes the road to Bonne Terre, as well as the road to Emmaus. And it’s just as beautiful a picture.