Biblical history explains the way things are.  What Moses records in today’s Old Testament Lesson is history.  It happened.  What Matthew records in today’s Gospel Lesson is also history.  It happened.  Moses records our first parents’ fall into sin and God’s promise to send them a Savior.  When the perfect man and woman engaged in spiritual battle against the devil they lost.  Matthew records our Lord’s temptation by the devil.  When Jesus, the Son of God, engaged in spiritual battle against the devil he won.  Adam and Eve lost, and we lost with them.  Jesus won, and we won with him. 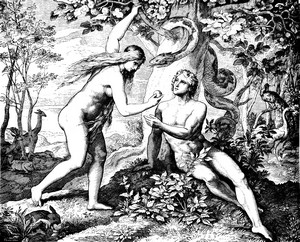 God told Adam not to eat of the fruit of the tree of the knowledge of good and evil.  This was before he made Eve.  Adam told Eve of God’s command.  That’s how she knew.  It was Adam’s job to serve his wife with God’s word, to love her, and to protect her from threats to her body and soul.  God gave him this duty.  Instead of exercising his husbandly duties as Eve’s pastor, he withdrew from her his spiritual care, leaving her to contend with the deceiver without his help.  He kept his mouth shut as the devil lured her away from God’s word to trust in her own feelings.

And the beat goes on.  For six thousand years now, men have abdicated their spiritual duty given to them by God to speak God’s word faithfully to their wives and to watch out for their wives’ souls.  They treat God’s word as something beneath them.  They think it is the manly thing to avoid theological conversation, unless they’ve had a few drinks and their natural inhibitions are sufficiently lowered to loosen them up to pontificate on all sorts of theological topics, making up in forcefulness for what is lacking in coherence and truth.

Those who dismiss the account of Adam and Eve’s fall into sin as a myth and reject the doctrine of original sin are spiritually blind.  The effects of Adam’s fall are obvious.  God told Adam, Adam told Eve, Eve listened to Satan, and Adam stood by watching.  There you have it.  That’s the history of the human race.  Why do people behave this way?  Because we all fell in Adam’s fall, that’s why.

It is called the original sin.  From the time of Adam, everyone born into this world with the sole exception of our Lord Jesus is born with the constant inclination and desire to do what is evil in God’s sight.  We are fallen creatures – especially in spiritual matters.  Doing what comes naturally, we sin.  We fall into idolatry and every kind of shameful sin.  Only God can restore us to life.  He does so through his word.

This is why the devil, in his temptations, always goes after the word of God.  False doctrine comes from hell.  It parades as wisdom.  It looks quite attractive, but it is always conceived in the mind of the father of lies.  “Did God really say?”  That’s the question.  Adam should have responded to Satan’s temptation by repeating God’s words, namely,

Of every tree of the garden you may freely eat; but of the tree of the knowledge of good and evil you shall not eat, for in the day that you eat of it you shall surely die. (Genesis 2:16-17)

Instead, he kept quiet and let his wife do the talking for him.  She replied to Satan’s question by garbling God’s command with an addition and an omission.  Well, let’s not worry about details.  She added the command not to touch the tree and she amended “you shall surely die” to “lest you die.”  She left out the surely.  Maybe we won’t surely die.  Maybe we might die.  The devil exploited her amendment of God’s words by providing the word “surely” but in contradiction of God’s word.  He said: “You shall not surely die.”  First, he engages Eve in a bit of ecumenical dialogue.  Once she’s engaged, he directly contradicts God’s word.  That’s when she leaves the word of God and begins to rely on what she sees.  It’s good for food.  And what she feels – it will make them wise.  God knows something he doesn’t want us to know.  What is he keeping from us?  Why doesn’t God want us to know good and evil?  The word of God is not enough.  There is something more.  It must be very valuable.  So she sets aside the word of God.  Once the word of God has been set aside the devil has won.  It’s just a matter of time before she eats.

And he eats.  He eats because she ate.  God spoke to him.  God gave him the command not to eat of the fruit of the tree of the knowledge of good and evil.  It was simple.  It was easy.  But he listened to the voice of his wife instead of listening to the voice of God.

They sinned.  That’s when they noticed that they were naked.  They were guilty.  They covered themselves up.  That’s what sinners do.  They cover up their sin.  Then, when God confronted them with their sin, they passed the buck.

The first is the most important.  God spoke judgment against the serpent, cursing it to crawl on its belly and to eat dust.  But the real judgment was against Satan, who had taken the form of a serpent in tempting Eve.  That God is not just talking to a snake becomes obvious when he says,

God is not talking to a snake.  A snake is incapable of enmity.  Snakes don’t hate.  They act by instinct.  The devil hates.  The battle between God’s children and Satan is the cosmic battle of the ages, stretching from the original sin to the end of the world.  At the center of human history is the event where God defeated Satan.  It is described as the Seed of the woman bruising the head of the serpent.

He is called the Seed of the woman.  But a woman has no seed.  The man has a seed.  But there is no man.  There is no father.  She is a virgin.  She gives birth to a Child who can destroy him who led our first parents into sin.  How does he destroy him?  He crushes his head.  He silences his forked tongue, his lies, and his deceptions.  But it costs him.  His own heal is bruised.  He suffers, dies, and rises again.  By his suffering he takes away from the devil the power to accuse.

The woman will bear children in pain and suffering.  She will want to govern her husband but won’t be able to.  As God said to her, “your desire shall be for your husband, and he shall rule over you.”  When she was created in God’s image, she wanted to submit to her husband as to her head.  Now, it’s a real pain for her to do so.  And so it is to this day.

The man will fight the elements and be frustrated in his efforts.  His dominion over all things was broken.  At the end of a life of labor, he will return to the ground from which he came: ashes to ashes, dust to dust.  The wages of sin is death.

In the midst of the curse, the death, the pain, and the guilt, was the promise.  The Seed of the woman shall crush the devil’s head.  God brings life out of death.  Adam knew that when he named his wife Eve, which means mother of the living, not mother of the dying.

When Adam and Eve sinned, they covered up themselves but couldn’t cover their shame.  God could.  He didn’t cover them with plant leaves.  He covered them with clothes made from animal skins.  Those skins were obtained by the shedding of blood.  God covers us today with the garment of salvation, purchased by the blood of Jesus.  We walk, talk, go here and there, and live as children of God, covered by the blood and righteousness of Jesus.  We live lives in defiance of him who led the human race into sin and death.  Our Lord crushed his head under his feet.  The father of lies would deceive us, accuse us, and bring our faith into doubt.  But the word of God shuts his lying mouth and drives him away.  Amen