Vanessa is one of the contributors over at Sisters of Katie Luther and we have invited her to tell her story on Steadfast Lutherans.

Be sure to visit Solus Calamum Designs to see her amazing artwork. 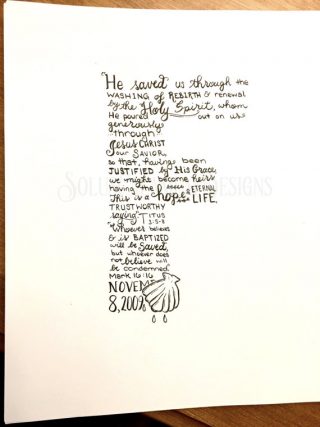 Years ago, during my blogging days, I shared a meme on my Facebook page. I thought it was hilarious and carried a great amount of truth. Sadly, none of my internet searches have been able to rediscover it, so you’ll have to just trust me. My childless readers were less than amused, though, and one in particular insisted that one didn’t have to be a parent to know true exhaustion.

In my naivete, I tried to explain it to her — that few vocations lead to this level of fatigue, and that there was a major difference between pulling a few all-nighters and spending years getting minimal sleep where any sleep achieved is more than likely broken up by night feedings, nightmares, and growing pains.

I don’t know any parent who doesn’t realize they were wrong to ever think they knew — pre-kids — what tired really was. I also don’t know any parent who doesn’t think this exhaustion is completely and totally 100% worth it. Kids are a blessing — a blessing worth all the sleepless nights, the frustration, and the utter confusion over how to respond to whatever behavior has presented itself.

Our youngest is 7 months old now. With him being our fourth this obviously isn’t my first rodeo, so to speak, and yet I’ve been thrown for a crazy loop this go ‘round. From the outside I probably seem okay. I get out of bed and get the four kids out the door before 8am six days per week. I look presentable (even if my showers have gone down to every other day for sake of time). But internally, I’m a mess.

In addition to the postpartum depression I’m currently on medication for, I suffer from postpartum anxiety. Contrary to what I initially thought — and read — my anxiety has no discernable trigger. It does not present itself as excessive worry over my baby or my other three kids.

For me, it’s primarily physical. My chest gets heavy. My breathing becomes difficult. My whole body feels like it’s tingly and restless. I can’t concentrate or focus, and I can’t stop it. Breathing exercises don’t help. Meditation doesn’t help. I can’t simply “get over it”, and I can’t “avoid the trigger” that doesn’t exist. When the anxiety attack hits, I just have to wait it out and do as best I can to function through it. This usually means trying to ignore the physical sensations for hours upon hours.

A counselor — who I stopped seeing for other reasons — noted that the anxiety symptoms were likely my body’s way of telling me to stop, slow down, and cool it. My body is trying to warn me that this can’t continue. Yet it must.

My vocations don’t disappear just because my body’s flipping out. I can’t stop being a mom. I can’t quit my full-time job yet. I also can’t force the baby and other kiddos to sleep better. Instead, I do what I can. I cut back on outside commitments. I work with my boss to go to part-time hours. I learn to say no to requests on my time. I let chores around the house slide when possible and do only what is absolutely necessary. I also scheduled an appointment with a primary care doctor just to verify there’s no other physical issue causing the symptoms. And in the midst of an attack, I cope; however, I can manage.

That’s where drawing came in. Writing has been my creative outlet for years now, but when my brain is on edge, the focus needed to put coherent sentences together just isn’t possible. Hand lettering and sketching, though, allows for a little more creative leeway.

I could doodle and make swirls and create something pretty without overtaxing myself. It was the calm I needed. I paired this with my striving to read God’s Word in the mornings before the kids woke up. As I read the Psalms and the Gospels, I’d hand letter and sketch out some segment of the passage. This eventually turned into larger projects for my family.

When a few friends inquired about commissions, I realized there was potential here to not only spend time treating my anxiety through art, but to also serve my neighbors — providing affordable custom artwork while helping my family financially. And so Solus Calamum Designs was started.

Now I’m far from healed, but I’m hopeful one day I’ll sleep again. One day I’ll get rest, and I’ll be able to slow down. One day I’ll stop feeling like my body’s going to shut down from being run on fumes for too long. One day this, too, shall pass — I hope. But in the meantime, I strive to rest in the grace and mercy of our Lord Jesus Christ, ever thankful for the amazing gifts He has given me both in those who serve me — my amazing and patient husband, our pastors, my friends and family — and in my own ability to serve others while I cope with my depression and anxiety through art. 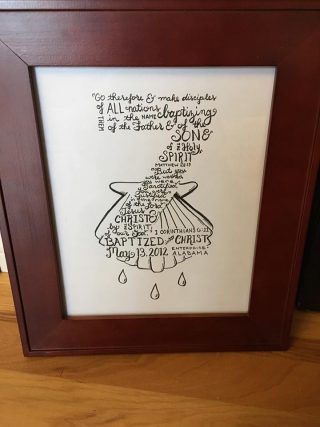 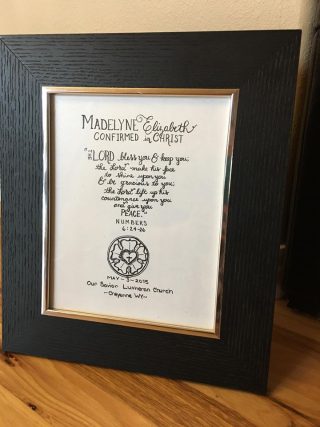