Our text today is a real eye-opener. It’s the story of Jesus healing the man born blind, from John chapter 9. It’s an eye-opener in several senses. Just the fact that Jesus can heal the eyes of a man born blind–that in itself is an eye-opener, in the sense of it being something startling or surprising. As the guy who was healed says, “Never since the world began has it been heard that anyone opened the eyes of a man born blind.” But then it’s a literal eye-opener for the man born blind. He receives his sight. But more than that physical healing, he will also have his eyes opened spiritually, and that’s the even greater blessing. And the good news is, Jesus does these healings for you also, both the physical healing and the spiritual sight. As we will see in this story, Jesus is “A Real Eye-Opener.”

The story begins with Jesus and his disciples passing by a man born blind. This raises a question in the disciples’ minds, and they want to get their master’s take on this: “Rabbi, who sinned, this man or his parents, that he was born blind?” See, in their minds, if something really bad happened to a person, it had to be somebody’s fault, somebody’s sin, and therefore God was punishing that person with a calamity. It’s like the people who told Jesus about the Galileans slaughtered in the temple. They thought it was because those people were worse sinners that this bad thing happened to them. Or like Job’s friends, who thought Job had some unrepented sin he wasn’t dealing with, and that’s why he was suffering so. But that wasn’t the case in those instances, and it isn’t the case here with the man born blind.

So Jesus answers: “It was not that this man sinned, or his parents, but that the works of God might be displayed in him. We must work the works of him who sent me while it is day; night is coming, when no one can work. As long as I am in the world, I am the light of the world.” Jesus came to do the work of God in the world, and this man’s blindness gives him an occasion to do so. Jesus came to bring healing and wholeness to fallen mankind, and this situation presents an opportunity to do just that. Jesus Christ is the light of the world. He brings light where there was darkness. Darkened eyes, darkened minds–Jesus will enlighten them both.

So Jesus heals the guy. And notice how he does it. He makes some mud with his saliva, anoints the man’s eyes with it, and sends him off with a word: “Go, wash in the pool of Siloam.” The man washes and comes back seeing. Isn’t this how our Lord works? He attaches his word of promise to a visible, tangible element, and by that means, he works a wonderfully creative work in our lives. Like in Holy Baptism. Jesus attaches his word to the water, and our sins are washed away. We receive our spiritual sight, with the promise of full physical healing to follow when Christ returns.

So Jesus gives sight, physical sight, to the man born blind. But another eye-opening aspect of this story is that the healing itself is reported and done with in just the first seven verses. We’ve got the whole rest of the chapter still to go. Because what follows is a big long controversy about this healing. The authorities want to look into it, investigate it, really because they want to discredit Jesus. They don’t like Jesus at all. He’s the guy who has been giving them so much grief, exposing their hypocrisy and undermining their prestige among the people.

Also, there’s the matter of giving spiritual sight to the man born blind. Jesus has healed his eyes. He also wants to heal his soul. So there’s that to deal with also.

The man’s neighbors and those who knew for sure that this is the same guy had been born blind now want to know how he got his sight. The man says it was Jesus who did it, but he doesn’t know where to find him now.

The neighbors take the formerly blind man to the Pharisees, the religious authorities in the area. The Pharisees naturally want to know more about this, especially because it concerns Jesus, the man they hate. The formerly blind guy tells them what happened, but the Pharisees don’t want to hear it. Jesus did this healing work on the Sabbath, and that really ticked them off. You see, you weren’t supposed to work on the Sabbath, and in their eyes this was a violation of the Sabbath law. Never mind that Jesus was really fulfilling the Sabbath, which was designed to bring rest and restoration to fallen creation, which is exactly what Jesus did in fixing the guy’s eyes. But no, they wanted to catch Jesus on something, so they nitpick that he was doing work on the Sabbath.

Then they ask the blind man about what he thinks about Jesus. “He is a prophet,” he answers. Well, blind man, he’s a little more than that, as you have yet to realize. But that’s coming.

The controversy continues. They bring in the man’s parents, to question them. “Yep, he’s our son. Yes, he was born blind. Nope, we don’t know anything about he got his sight. Why don’t you ask him? He’s old enough to answer on his own.” Mom and Dad are a little afraid of getting caught in the crossfire of this Jesus thing.

So the Pharisees bring in the man again, for another round of questioning. Now he’s starting to get a little annoyed with them. “Look, I told you what happened. How he did it, I don’t know. One thing I do know: I was blind, but now I see. So obviously God must have been with this Jesus. How else could he do such a miraculous thing? You guys are supposed to be the religious experts. Can’t you see that much?”

The Pharisees are angry with the man for telling them off, and they kick him out. But now Jesus has another healing in store for the blind man. He’s going to open his eyes spiritually.

Jesus finds him and asks him, “Do you believe in the Son of Man?” “The Son of Man” is another way to say “the Messiah,” “the Christ,” the great deliverer promised for centuries, who would bring in an age of blessing and the kingdom of God on earth. “And who is he, sir, that I may believe in him?” the man asks. Jesus answers, “You have seen him, and it is he who is speaking to you.” The blind man responds, “Lord, I believe,” and he worships him.

Now the Lord has worked the greater healing. He has opened the man’s eyes spiritually. To realize that Jesus is the Christ, the God-sent Redeemer–this is the enlightenment that we all need. For in Christ, in this man Jesus, the Son of God come down from heaven–in him is all our salvation and our hope for eternal healing. 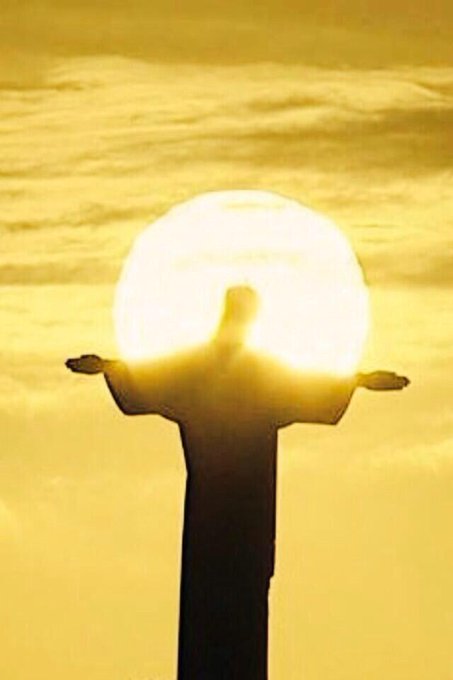 Jesus has opened your eyes, hasn’t he? He has given you the spiritual eyesight, the faith, to see that he, Jesus, is your Savior. Christ has washed away your sins by his holy blood shed on the cross and delivered to you in the waters of Holy Baptism. The Holy Spirit has enlightened your mind to see the truth, to believe in Christ Jesus, who is the way, the truth, and the life. “I am the light of the world,” Jesus says, and he couldn’t say that unless he was the only one who can bring light and life to all creation.

In the light of Christ, now you can see things as they really are. You can see that the true meaning and purpose of life is found only in relationship with God, through Jesus Christ and what he has done for you. Jesus works the work of God for you and for all sinners who trust in him. He saves you from your sins. He gives you the gift of faith. He opens your eyes spiritually now, with the sure promise of full physical healing in the age to come. Christ has redeemed your soul, and with that he has also redeemed your body. The sacraments attest to that, when the baptismal water is applied to your body and when you take into your body the precious, life-giving body and blood of Christ.

My baptized brothers and sisters, you will share in Christ’s resurrection. Bad eyesight? Loss of hearing? Weak knees and achy joints? All will be repaired and restored, better than ever, on the day of resurrection. And we will live with Christ and all his saints, in glorified bodies, in a restored creation, in perfect fellowship forever.

This is the gift that the blind man received when Jesus opened his eyes spiritually. Now he can see, really see. But there are some who refuse to see. They have blinded themselves to the truth. The Pharisees, for example. Jesus says, “For judgment I came into this world, that those who do not see may see, and those who see may become blind.” Some of the Pharisees hear this and say, “Are we also blind?” Jesus tells them, “If you were blind, you would have no guilt; but now that you say, ‘We see,’ your guilt remains.” The Pharisees claimed to have it all together, but their pride was blinding them. They didn’t think they needed a Savior. They didn’t think they had anything to repent of. And so they remained blind spiritually. And their antagonism toward Jesus would only mount. All this is heading toward a showdown, and that’s what we will see when we get to Holy Week.

But for now, the takeaway from today’s story is that what Jesus does is a real eye-opener. He opens our eyes from the blindness of sin. He will heal us of all our physical ailments–and even death itself–in the age to come. And he uses means to accomplish his purpose in our lives, the means of grace, Word and Sacrament. There still will be opposition to Christ in this world. We see it every day. But Jesus will open your mouth, too, to speak up and to speak out, to confess Christ before men, regardless of the consequences.

Jesus is a real eye-opener! He has opened our eyes, praise God, and so now where do we look? “Oh come, let us fix our eyes on Jesus, the founder and perfecter of our faith, who for the joy that was set before him endured the cross, despising the shame, and is seated at the right hand of the throne of God.”