Today we continue our series on “Isaiah’s Advent Prophecies.” Today’s prophecy comes from Isaiah 11, and it begins, “There shall come forth a shoot from the stump of Jesse, and a branch from his roots shall bear fruit.” And then our text closes, “In that day the root of Jesse, who shall stand as a signal for the peoples–of him shall the nations inquire, and his resting place shall be glorious.” Notice that this one who is coming is first called “a shoot from the stump of Jesse,” and then he is called “the root of Jesse.” Both “shoot” and “root.” And so our theme: “The Shoot and the Root of Jesse.”

Also, notice that this one who is coming, who is both shoot and root, “shall bear fruit.” “There shall come forth a shoot from the stump of Jesse, and a branch from his roots shall bear fruit.” Shoot, root, and fruit.

Now Isaiah lived 700 years before Christ, but this passage is a prophecy about Christ. Isaiah is saying that the Messiah will be both the shoot and the root of Jesse, and that he will bear abundant fruit. And this fruit will be a kingdom of life and peace for people around the world, for all of creation, for every one of us here today.

The shoot and the root of Jesse. Now to begin, I suppose we should ask, “Who is this Jesse fellow who is mentioned here? What does he have to do with anything?” Jesse is not mentioned a whole lot in the Bible, but the few times he is, it’s significant. Jesse’s claim to fame is that he is the father of David, the great king of Israel, and all the kings descended from David likewise come from his line.

That line of kings, David and Solomon and so on, lasted for about 400 years. But then it was cut off, at least as far as kings actively ruling in Jerusalem. Babylon defeated Judah and carried the king off into exile. Oh, the physical line of descendants continued, but they were no longer reigning as kings. Other powers took over and ruled over the Jews, first Babylon, then Persia, and later, Greece and Rome. And so the royal line of kings was cut off. It was like a tree that had been cut down. What was left looked like just a dead stump. How could another king come from that dead stump? You’ve got to be kidding! That’s what our text is saying when it says “the stump of Jesse.” It’s looking to a time when the royal line would be cut off, cut down, and with no prospects for its revival.

Have you ever had to have a tree cut down in your yard? It may have been a beautiful tree, but it got a disease and its branches died, and it had to be cut down. Just a stump was left. Now you would be greatly surprised if, a number of years later, that dead stump could produce a living shoot to come forth and rise up and make a new and beautiful tree once again–let alone one even greater and more glorious than the one before. That would be astounding. 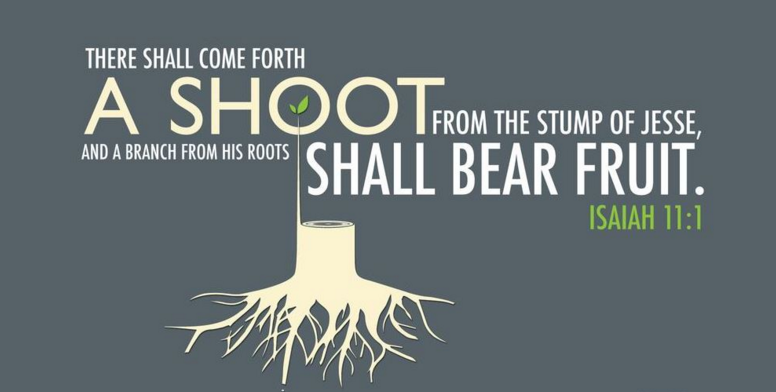 But that’s what Isaiah is prophesying here with regard to the stump of Jesse. Listen: “There shall come forth a shoot from the stump of Jesse, and a branch from his roots shall bear fruit.” Out of what looks like a dead stump will come a new and living shoot. Small at first, seemingly insignificant, but it will rise up and become a fruitful tree.

This is a picture of the coming of the Christ. After close to 600 years of no Davidic king actively ruling, after 600 years of foreign domination, 600 years of the line of kings being reduced to a bunch of nobodies, after all that time of seeming deadness, there would come a little lively shoot, in the form of a baby named Jesus. Springing up barely noticed, here would come a shoot from the stump of Jesse. This would be the fulfillment of Isaiah’s prophecy.

The Christ, the Messiah, is coming. The shoot from the stump of Jesse, coming when it looks like all hope had been lost long ago. That’s how God works, bringing life out of death. Indeed, that is the pattern that will mark the reign of this coming king: life out of death, when it looks like all hope has been lost. For Jesus of Nazareth, the king of the Jews, will be nailed to a tree, the tree of the cross, a tree of death. His death would be the death of hope for his crushed disciples. They thought everything was over. But it was just the opposite: It was only the beginning. Life coming from out of death. Jesus’ death paid the price for our sins and defeated all our enemies, including death. Christ’s death opened the way to life, and after three days in the tomb, he rises, victorious and full of life. The cross of Christ is our tree of life.

And so Jesus Christ is the shoot coming from the stump of Jesse, the restoration and revival of the royal line of David long dormant. But not only so, not only is he the shoot, he is also the root of Jesse. Our text says, “In that day the root of Jesse, who shall stand as a signal for the peoples–of him shall the nations inquire, and his resting place shall be glorious.”

What does it mean that Jesus Christ is not only the shoot from Jesse but also the root of Jesse? It means that he is the origin of the whole Davidic line–indeed, of Jesse himself. Jesse and David and Solomon and all the rest have their source and their reason for being in Christ. This is the mystery of the person of Christ as both true God and true man. He is a descendant of David but also David’s Lord, both at the same time. Son of David and Son of God. He is both the origin and the offspring of the line of Jesse. Both root and shoot. The man who died on the cross as the king of the Jews is the very Son of God who was with the Father in the beginning. The shoot from the stump is, at the same time, the root of the tree. This is the uniqueness of the person of Christ.

And notice, the prophecy says the shoot and the root of “Jesse.” It could have said “David,” but instead it takes it one step back further from David to Jesse. This is to say that the new king will not be just another descendant of David. It’s saying he will be a whole new David, a new and eternal king, even better than David. A divine “restart,” if you will. So many of the Davidic kings fell short, even David himself. But no mess-ups with this Messiah. This new king will surpass them all, far surpass them. And so will his kingdom far surpass theirs.

Here is where we can talk about the fruit that this king will bear–good fruit, sweet fruit, coming from this righteous branch. The Messiah’s fruit will be seen in the kingdom over which he will reign. Two things here: One is that his kingdom will be a “peaceable kingdom.” The other is that his kingdom will include the Gentiles, the nations. And both of these things mean life for you and me. 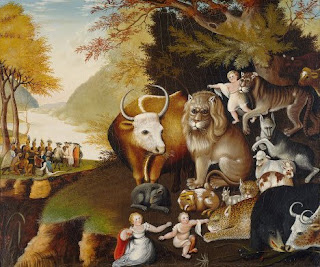 First, the peaceable kingdom: “The wolf shall dwell with the lamb, and the leopard shall lie down with the young goat, and the calf and the lion and the fattened calf together; and a little child shall lead them. The cow and the bear shall graze; their young shall lie down together; and the lion shall eat straw like the ox. The nursing child shall play over the hole of the cobra, and the weaned child shall put his hand on the adder’s den. They shall not hurt or destroy in all my holy mountain.” This vision has enchanted poets and artists for millennia. Wolf and lamb, leopard and goat, calf and lion, lying down together. No more hurting or harming, no more violence or death. Man and beast dwelling in harmony. A return to the Garden, and then some. Paradise restored. This peaceable kingdom is the fruit that the shoot of Jesse will bring. Creation itself will be brought back in order. Life will be lived the way it was meant to be, “for the earth shall be full of the knowledge of the LORD as the waters cover the sea.”

Do you look forward to that? You will be there, you know. Yes, you! Christ’s peaceable kingdom will include forgiven sinners like you and me! No more sinful nature to lead us astray. No more powers of Satan to oppress us. No more violence or persecution, no more conflict or terror, no more disease or disorder or death. Only life and peace and the knowledge of God, as far as the eye can see.

And this kingdom will include not only Israel but the people of God from every tribe and nation and language and people. “In that day the root of Jesse, who shall stand as a signal for the peoples–of him shall the nations inquire, and his resting place shall be glorious.” And in Romans, St. Paul cites this same passage from Isaiah to make the point that the coming king is coming for the Gentiles, too: “The root of Jesse will come, even he who arises to rule the Gentiles; in him will the Gentiles hope.” That means all of us! Friends, we are those Gentiles whose hope is found in the root of Jesse! And Christ is coming, coming again, to bring our hope to sight.

Today Isaiah is pointing us to Jesus Christ as the fulfillment of his prophecy and the answer to our prayer. Christ is both shoot and root. Jesus is the shoot from the stump of Jesse, the shoot springing up from what looked like the dead stump of the Davidic line. Jesus is the one who brings life out of death. From the cross and tomb, our Lord and Savior arises to bring us life.

And this shoot from the stump of Jesse is also its root. Christ the Son of God is the origin and source of the line of kings that leads to him. A new and greater David, who brings in an even greater kingdom, the peaceable kingdom of paradise restored. A kingdom that extends even to us Gentiles. An everlasting kingdom that will include all those who hope in Christ their Savior. Yes, this is the fruit coming from the one who is both the shoot and the root of Jesse.