[Note: Isaiah 7 is a reading both for the Fourth Sunday in Advent and for Christmas Eve. Since my congregation did not get to hear Sunday’s sermon due to weather, and since I’ve been doing a series on the Isaiah texts, I reworked that sermon for Christmas Eve. CH]

In the hymn we just sang, “Lo, How a Rose E’er Blooming,” there’s this line, “Isaiah ’twas foretold it.” And yes, it was Isaiah who did foretell it. But what was it that Isaiah foretold? Isaiah prophesied the birth of Jesus Christ. The gospel writer Matthew tells us as much, that this is the fulfillment of Isaiah’s prophecy. He writes: “All this took place to fulfill what the Lord had spoken by the prophet: ‘Behold, the virgin shall conceive and bear a son, and they shall call his name Immanuel’ (which means, God with us).” So clearly the birth of Jesus is the fulfillment of Isaiah’s Immanuel prophecy. Jesus is “God with us” in the profoundest way. And thus our theme for this evening: “Isaiah Foretold It, Jesus Fulfilled It.”

But there was also another “Immanuel”/”God with us” situation going on back at the time of Isaiah himself, some 700 years before Christ. When we find out a little more about that, we will gain greater insight into what the birth of Christ means for us today.

So here’s the deal. The southern kingdom, Judah, is being pressured by the northern kingdom, Israel, to join them in an alliance with Syria to withstand the nation of Assyria, which is seeking to expand its empire, as empires are wont to do. You got all that? Israel and Syria are wanting Judah to join them in opposing Assyria. But if Judah doesn’t, then Israel and Syria could attack Judah, which they are on the verge of doing. “If you don’t join with us, we’ll take you over.”

This has the king of Judah, King Ahaz, worried. “The heart of Ahaz and the heart of his people shook as the trees of the forest shake before the wind,” it says. What should Ahaz do? Rely on a political alliance to hold off Assyria? But if he doesn’t, what will Israel and Syria do to him and his people? Ahaz seems caught between a rock and a hard place. That’s the situation.

In steps the prophet Isaiah. He’s got a word from the Lord for King Ahaz. It’s a word of assurance, but also a word of rebuke and a word of warning. Isaiah first tells Ahaz, “Be careful, be quiet, do not fear, and do not let your heart be faint.” Those nations that are pressuring you, Israel and Syria, they will not succeed in their threat against you. “It shall not stand, and it shall not come to pass.” Listen, Ahaz, “If you are not firm in faith, you will not be firm at all.”

Then the Lord has more to say to Ahaz, and that’s where our text picks it up: “Again the LORD spoke to Ahaz: ‘Ask a sign of the LORD your God; let it be deep as Sheol or high as heaven.’ But Ahaz said, ‘I will not ask, and I will not put the LORD to the test.’” At first it sounds like Ahaz is being pious by not asking for a sign. But he’s just trying to avoid having his lack of faith being exposed. And the Lord himself is telling Ahaz to go ahead and ask for a sign.

So Isaiah continues: “Hear then, O house of David! Is it too little for you to weary men, that you weary my God also? Therefore the Lord himself will give you a sign. Behold, the virgin shall conceive and bear a son, and shall call his name Immanuel.” Ahaz has not believed the word of the Lord, so the Lord will give Ahaz a sign to confirm what he’s been saying.

The Lord has been saying that the threat of Israel and Syria will not stand, and this sign will confirm it. A young woman will become pregnant and have a son, and his name will be called Immanuel. Now that in itself is not so remarkable. Women get pregnant and have sons all the time. Even the name, Immanuel, is not so strange. In Hebrew, it means “God with us,” and there are lots of names like that in the Old Testament, names with “God” or “the Lord” built into the name. So not much of a definitive sign so far.

But Isaiah continues. He tells Ahaz that before the child has reached a certain age, a young age, the threat now facing Judah, the threat that looks so ominous at the moment–that threat will be gone. “The land whose two kings you dread will be deserted.” And so Jerusalem will not be taken. Judah will be spared. That will be the sign confirming what Isaiah is saying now, when you see this come to pass within the next few years. And that is what happened. Israel and Syria did not succeed in their plan against Judah. Both Israel and Syria were defeated by the Assyrians, the northern kingdom falling to Assyria in 722 B.C.

But then, look out, Ahaz! Assyria is not going to stop with knocking off Israel and Syria! Next they’re going to be coming after Judah! Like a mighty river overflowing its banks, Assyria is going to proceed farther south and reach the walls of Jerusalem. Isaiah puts it like this: “The LORD will bring upon you and upon your people and upon your father’s house such days as have not come since the day that Ephraim departed from Judah–the king of Assyria!”

And again, that is what came to pass. Assyria threated Jerusalem in 701 B.C. And at that time Isaiah had to counsel the next king of Judah, Hezekiah, to trust in the Lord and not in political or military alliances. Hezekiah did heed the word of Isaiah, and that threat again was lifted.

A hundred years later, though, another threat came along, and that was the Babylonians. They did take the people captive, took them as exiles to Babylon, and that’s what the hymn is alluding to when it says, “And ransom captive Israel, that mourns in lonely exile here.” Transfer that to the church, to us, as we sit in this vale of tears and wait for the Lord to come and set us free, and that’s the connection.

What’s the point in all of this? To trust in the Lord, and not in any human measures of strength. To trust in the Lord, and not in man, not in armies, not in self, to be your deliverance. “Put not your trust in princes, in a son of man, in whom there is no salvation. When his breath departs, he returns to the earth; on that very day his plans perish. Blessed is he whose help is the God of Jacob, whose hope is in the LORD his God.”

“Immanuel,” “God with us.” God being with you is all you need. “Immanuel.” That is the word Ahaz should have heard and heeded back in 735 B.C. Now fast-forward to, well, like 1 B.C., in other words, to just months before the birth of Christ. There is a man named Joseph, and he seems stuck between a rock and a hard place. The woman he’s planning to marry, Mary–she has turned up pregnant. And Joseph knows he’s not the daddy. So what can he do? He decides to break it off. Obviously, to him, she’s been fooling around with somebody else.

But such is not the case. The Lord comes with a word for Joseph. It’s a word of assurance. Mary has not been fooling around. She is still a virgin. She is pregnant in a unique, one-of-a-kind way, by the Holy Spirit. Mary is part of the fulfillment of a prophecy, Isaiah’s Immanuel prophecy: “‘Behold, the virgin shall conceive and bear a son, and they shall call his name Immanuel’ (which means, God with us).” 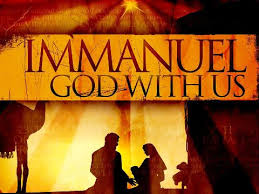 This son that Mary will bear, he will be the ultimate “God with us,” the ultimate “Immanuel.” His name will be “Jesus,” meaning “Savior,” “for he will save his people from their sins.” “Their sins.” That is the big threat facing people. Not Syria or Assyria or Babylon or an unfaithful fiancée. But sins. Our sins. Still to this day. That hasn’t changed. We still need saving, we still need deliverance, because of our sins. That’s what separates us from God. That’s what leads to death, the Big Death of eternal damnation. Where are we going to look for help with that?

Don’t pull an Ahaz. Don’t look for sources of help that cannot save or deliver. Only one can. It is the Lord himself, in the person of this “Immanuel,” this “God with us” one. That’s Jesus, the son of Mary. He is God in the flesh, come to save us. Come to be with us, God with us, in our midst to save us.

Jesus, Immanuel, saves us from our sins. He does this by offering himself up as the sacrifice for our sins. This is why the Son of God had to be born in the flesh, to live as our brother and to fulfill all righteousness and to suffer and die in our stead, in the place of sinners like us. Jesus has done this, for you, in order to save you! He is Immanuel, God with us, now risen from the dead and living and reigning to all eternity. And he is coming back to rescue you from all evil and to raise you from the dead. You have his word on it. You have his name on it, his name placed upon you in Holy Baptism. You are secure in him.

Dear friend, do you ever find yourself stuck between a rock and a hard place? Beloved, no threat can overpower you. No threat can shake you like trees in the wind. Trust in Jesus, Immanuel, God with us. Isaiah ’twas foretold it. Jesus ’twas fulfilled it.

Earlier in the service, we sang:

Well, Emmanuel has come, and he has ransomed captive Israel. This is why we can rejoice and sing, in the words of our next hymn:

Let’s all stand and sing that hymn now, number 375, “Come, Your Hearts and Voices Raising.”