Today is the First Sunday in Advent, the season leading up to Christmas. But you’ll notice that the Holy Gospel for this day is actually a reading about Palm Sunday. What gives? Why do we get a Palm Sunday reading here at the beginning of Advent?

Well, if you think about it, there is a good reason for this selection. Think about what those crowds were doing on Palm Sunday. They were welcoming Jesus as their coming king. “Behold, your king is coming to you,” our text says, quoting from the prophet Zechariah. And we sang that verse both in the Introit and in the Gradual this morning.

“Behold, your king is coming to you”: That is definitely an Advent theme. The word “Advent” even means “coming.” In Advent, we’re looking forward to our king coming to us. We rejoice at his coming to us in the flesh at Christmas. In repentance and faith, we prepare the way of the Lord coming to us now in Word and Sacrament. And we look forward to our king coming again in glory on the Last Day. “Behold, your king is coming to you”: Yes, that certainly is very Adventish, and so the account of the crowds welcoming Jesus into Jerusalem is indeed appropriate for Advent. 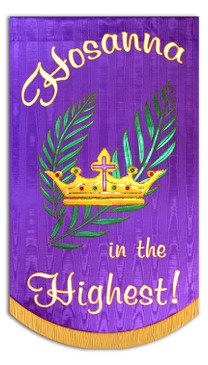 And notice how those crowds welcome Jesus as he rides into Jerusalem. What do they shout? What do they say? Hear their cries again: “Hosanna to the Son of David! Blessed is he who comes in the name of the Lord! Hosanna in the highest!” That’s what I want to zero in on now. That word “Hosanna.” Why were the crowds saying that back then? Why are we saying it now? That same word “Hosanna.” Thus our theme this morning: “‘Hosanna!’ Our Advent Prayer and Praise.”

So the crowds back then were saying “Hosanna,” and we’re doing a fair bit of hosanna-ing here today. We just sang “Hosanna to the Lord” as a refrain in our hymn a moment ago. Later in the service, the distribution hymns will include lines like these: “My hosannas and my palms graciously receive, I pray thee.” “Hail! Hosanna, David’s Son!” “Hail! Hosanna to our King.” “Our glad hosannas, Prince of Peace, Thy welcome shall proclaim.” “Hosanna to the anointed King.” “Hosanna in the highest strains.” And then our closing hymn will have this refrain: “Hosanna, praise, and glory! Our King, we bow before Thee.” And of course every Sunday in the liturgy, in the Sanctus, as Christ is about to come to us in the Sacrament, we sing the words, “Hosanna, hosanna, hosanna in the highest. Blessed is He that cometh in the name of the Lord.” So we too are welcoming Jesus as our king, just like those Jerusalem crowds of old.

But why were they using the word “Hosanna”? What does that word mean? And how were they using it, as what sort of a welcome? When the crowds at Jerusalem cried, “Hosanna!” they were using it as an acclamation, an ascription of praise. By shouting “Hosanna to the Son of David! Blessed is he who comes in the name of the Lord!” they were welcoming and praising Jesus as the Messiah, the long-promised king descended from David, come to deliver them. So “Hosanna!” is kind of like saying, “Hail the conquering hero!” or “Hail to our coming king!” Clearly the crowds were using “Hosanna!” as an acclamation, an ascription of praise.

But that’s not exactly what the word means, literally, if you translate it from the Hebrew. You see, there’s one “hosanna” that we missed, and we didn’t even notice it when we said it. It was back in the Introit of the Day, in a portion taken from Psalm 118, where it says, “Save us, we pray, O Lord!” But you may say, “I don’t see the word ‘hosanna’ there.” Well, it’s there, if you say it in the original Hebrew. “Save us, we pray!”–in Hebrew that’s “hosanna,” or, as it’s pronounced, “hoshiana.” It literally means, “Save now, deliver now, we pray you, we beseech you!” So before it became an acclamation of praise, “Hosanna!” originally was a prayer for salvation, a plea for deliverance.

And the crowds greeting Jesus would have had Psalm 118 on their mind, since that psalm was part of the prescribed liturgy for Passover. Because that’s what these Jewish pilgrims were coming into Jerusalem for, to celebrate the Passover. The hoshiana verse was on their minds and on their lips, and they applied it to Jesus as their coming king.

The crowd at Jerusalem, then, uses that plea for deliverance, “Hoshiana!” as a shout of acclamation. The prayer for salvation becomes an ascription of praise. They are praising Jesus precisely because they believe he is coming to save them, deliver them. They are acclaiming Jesus as the coming Messiah, sent by God to be the new and great king from the line of David, to deliver Israel from all her foes.

Now they’re right and they’re wrong at the same time. They’re right, in that Jesus is indeed the great Messiah, the deliverer sent by God to save his people. Only it will be a salvation and deliverance much bigger than they realize. And it will happen, it will come about, in a way much stranger than they expect.

Their hosannas sell Jesus a little bit short. He is much more than just a new national king who will make Israel great again. He will do more than restore Israel to her glory days, bring peace and prosperity, and get the Romans out of town. Jesus has bigger fish to fry than that.

How about us? What kind of a king do we think we need? Are we just looking for someone to make our life easier, to make us happier and more successful? Or do we recognize our deeper need, our need for a Savior? For that is what Jesus is coming to be for us. Our Savior, to deliver us from our sins. To save us for eternity.

Jesus comes to deal with our biggest problem, the underlying problem that produces all our other problems, the ones we see and the ones we don’t see or realize or admit. And that big problem is our sin. Oh, not just the sins of those other people, the bad people, the immoral people, the people we look down upon. But our sins, the sins of us good and respectable people, God’s people, whether we’re talking about temple-going Israelites or church-going Lutherans. Yes, our sins–that’s what we need a deliverer for, a Savior. “Save us, we pray, O Lord!” “Hoshiana!” 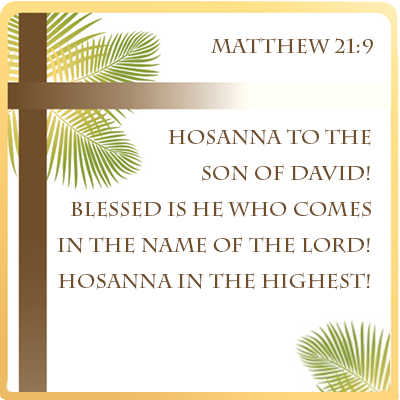 And Christ will do it by way of the cross. That’s what Jesus is riding into Jerusalem to do. To go to the cross, where he will die for the sins of the whole world, for your sins and mine, and thus to deliver us from eternal death. That’s the victory that Jesus will win.

This is why Jesus is the answer to our prayer and the recipient of our praise. This is why we sing hosannas at the start of Advent. Jesus our king is coming to us, to do the job we need most of all. He comes at Christmas, to be born in the flesh, so that he can die on the cross as our substitute and then rise bodily from the dead. Jesus comes to us now in Word and Sacrament, to bring us the good news of salvation, to join us through baptism to his own resurrection life, and to give us his very body and blood for the forgiveness of our sins. And Christ our Advent king will come again, on the Last Day, to raise us up, to take us home, and to give us eternal life.

And so “Hosanna!” is our most fitting Advent prayer and praise. Today we join with those crowds that welcomed Jesus, and we sing with them to greet our coming king: “Hosanna to the Son of David! Blessed is he who comes in the name of the Lord! Hosanna in the highest!”