On Wednesday night, late on Wednesday night, the Chicago Cubs won the World Series. As I was sitting there watching it on TV, as soon as the ball went into Anthony Rizzo’s glove for the last out, I let out a shout and threw my hands into the air and was utterly excited and ecstatic. For a lifelong Cubs fan from the north side of Chicago, this was quite a moment. After decades of following my team and suffering disappointment after disappointment, and even in this series, being down three games to one, and even in Game Seven, losing the lead late and thinking this is just going to be another in a long line of disappointments–no, this time, finally, things turned out all right. We won. I couldn’t believe it. Finally, we won.

The next day, on Thursday, on the internet, I saw videos of other lifelong Cubs fans and their reactions at the moment the Cubs won the World Series. I saw people jumping up and down, shouting, screaming, in sheer excitement and joy. I saw grown men falling on the floor and weeping, grown men crying tears of joy, tears of relief. “I can’t believe it! I can’t believe it!” they would say.

And then I tried to understand all this. Why these strong emotional reactions? It was more than just a sports team winning a championship. It was more than that, it ran much deeper. It was the stored-up, pent-up emotion of 108 years of waiting. It was people thinking of their parents and grandparents who didn’t live to see this day–the generations of Cubs fans who passed down the faith to their children, as it were. And it was the unbelievable surprise that for once, finally, it turned out OK, all right. You see, being a Cubs fan you always expect, and you always prepare yourself for, something to go wrong. Something always goes wrong. You get real close, and then something goes wrong. And that looked like it was happening again Wednesday night. But then–but then it turned out OK. Something went right for a change. It was like a great weight was lifted from your shoulders. And a great wait, w-a-i-t, a really long time of waiting, was over. The weight was lifted, the wait was over, it’s time to celebrate.

I looked on the TV and I saw a great multitude, all wearing Cubbie blue, all gathered together on a beautiful day, everybody happy, everybody smiling and cheering and singing, millions of people who had come out of a long, long time of waiting, a great multitude now celebrating a great victory they had been waiting for their whole lives.

OK, now take all that joy and multiply it by about a bazillion or two, and that’s what it will be like when we as the church celebrate our Lord’s victory on the day when Christ returns and for the eternity that follows. It will be the greatest celebration that has ever occurred, for the greatest victory that has ever been won. And you will be there. You and I will be there, along with all the saints, all of God’s people who have gone before us. Yes, it will be “The Greatest Victory Celebration.” 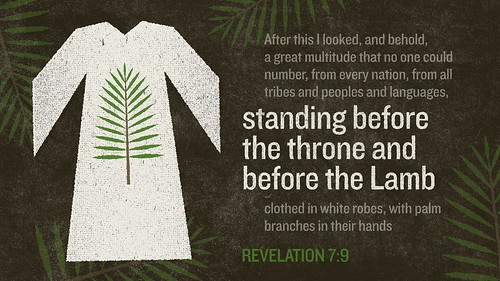 The apostle John was given a glimpse of this great victory celebration. He tells us about it in the Book of Revelation, chapter 7: “After this I looked, and behold, a great multitude that no one could number, from every nation, from all tribes and peoples and languages, standing before the throne and before the Lamb, clothed in white robes, with palm branches in their hands, and crying out with a loud voice, ‘Salvation belongs to our God who sits on the throne, and to the Lamb!’ And all the angels were standing around the throne and around the elders and the four living creatures, and they fell on their faces before the throne and worshiped God, saying, ‘Amen! Blessing and glory and wisdom and thanksgiving and honor and power and might be to our God forever and ever! Amen.’”

What a scene! This will dwarf any great assembling of people that has ever taken place. “A great multitude that no one could number.” Way more than five million. And from all over the world. From all of human history. All the believers from all the centuries, from Old Testament and New, Jews and Gentiles, everyone who has trusted in God’s promise of sending a Savior. A promise realized in the coming of the one and only Savior for all of mankind, namely, our Lord Jesus Christ. He, the Son of God–he is the Lamb who was slain, sacrificed on the cross to atone for all of your sins and for the sins of all people everywhere. Jesus is the Lamb of God who takes away the sin of the world. And so you see this great multitude gathered before the throne of God, all of them clothed, not in Cubbie blue, but in pure clean white, all of them shouting and singing at the top of their lungs, “Salvation belongs to our God who sits on the throne, and to the Lamb!” You see, this is something to get excited about! Salvation! To be saved, saved from sin and death and an eternity in hell. Salvation! To be saved for an eternity in heaven, enjoying the blessings of our God unhindered, in joyous communion with our Lord and with all of his people. There is nothing better, and you and I will be there. Just imagine!

How joyous that will be! And that joy will be intensified because of the incredible contrast it will be to the pain and sorrow we will have come out of. Just as the Cubs’ fans joy was increased because of the 108 years of disappointment, so our joy will be intensified because of all the trouble and sadness we will have left behind. Think of it. Think of all the sorrow and sadness we experience in this life. It truly is a vale of tears. Sickness, sadness, sorrow. Death, divorce, disappointment. Tragedy and calamity. Conflict and broken relationships with others. Fightings and fears within. Loss and loneliness. Guilt and pangs of conscience. The sense that we are not living as God’s children should live. All of this pain and trouble, some of which we bring upon ourselves, some of which others inflict upon us.

Then there’s the special trouble, the tribulation, the church suffers precisely because we belong to Christ. The Christians back in John’s time knew about this kind of tribulation. The Roman emperor and the pagan culture made being a Christian a dangerous thing to be. Christians could be lit up like torches in Caesar’s backyard. Christians could be stoned or get their heads lopped off. Well, hey, it’s still like that in our day. Maybe not in America, not yet. But this same kind of persecution is happening in our world today. In the Middle East, in Africa, by ISIS and Boko Haram, Christians by the thousands are being murdered and martyred.

And here in America, things have been getting worse, not better, for the church. The federal government has been actively working to punish Christians and to take away our rights. The push to take away religious liberty has been accelerating. Our culture has become increasingly hostile to Christianity. Government, education, the media, the entertainment industry–all have been hammering away at the truth and promoting the lie. The goal is to attack the church and stifle our message. So we may be in for a time of tribulation and persecution that will only get worse. God help us.

And he will. He will strengthen us for the fight like he strengthened the saints of old. The hope we have, the firm hope of salvation that is ours in Christ–this will give us the strength to endure, the love to sustain us, and the courage to confess our faith, and to do it with joy.

Where does this hope come from? It comes from the same source spoken of in our text. John writes: “Then one of the elders addressed me, saying, ‘Who are these, clothed in white robes, and from where have they come?’ I said to him, ‘Sir, you know.’ And he said to me, ‘These are the ones coming out of the great tribulation. They have washed their robes and made them white in the blood of the Lamb.’”

That’s it! That’s how you get the white robe! That’s how you get included in that number of the saints standing before the throne. By the blood of the Lamb. Jesus’ blood shed for you on the cross. That’s the only thing that can get the stain out, the ground-in stain of your sins. But the blood of Jesus is powerful enough to wash away those stains. It’s the only thing that works. And that cleansing flood was applied to you in your baptism. God’s baptism, which he applied to you to wash away your sins and to claim you as his child. You are baptized. You are trusting in Christ your Savior. You have the white robe of his perfect righteousness. And so you will stand on that great day when Christ returns and raises you from the dead, along with all those saints from the past.

We will have been waiting for that day for a long time, and I guarantee you, it will come and it will be glorious, far beyond anything you can imagine. And you will be there, when Christ comes back and the party begins. The singing and the laughing and the happy reunions and the joy unspeakable that lasts forever. “For the Lamb in the midst of the throne will be their shepherd, and he will guide them to springs of living water, and God will wipe away every tear from their eyes.”

Hey, look, I was crazy about the Cubs winning the World Series. But that will be nothing, it won’t even hold a candle, to the joy we will experience when our Lord Jesus Christ returns. Truly, that will be the greatest victory celebration!