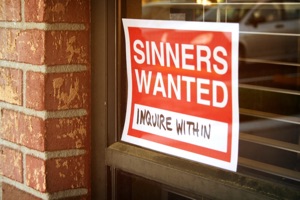 Jesus receives sinners. Do you qualify? If so, great, I’ve got good news for you today. Or do you think you’re not that bad of a sinner? Well, in that case, you’re on your own. Good luck with that.

Jesus receives sinners. That’s the message that comes through loud and clear in our Gospel reading today, from Luke chapter 15. And when Jesus receives sinners, he rejoices over them, he rejoices that they’ve been found and brought back. And not only does Jesus receive sinners, and not only does he rejoice over them, he does one more thing. He restores these sinners to his service. That comes through in the Epistle reading for today, from 1 Timothy 1. And so our theme this morning: “Jesus Receives, Rejoices over, and Restores Sinners.”

First, Jesus receives sinners. And actually, that was said as a criticism of Jesus. Jesus’ opponents said that about him. The Pharisees and the scribes were grumbling against Jesus and saying, “This man receives sinners and eats with them.” Why were they saying this? Because they noticed that people they looked down upon as sinners were coming to Jesus to hear what he had to say–and Jesus wasn’t turning them away! That’s what they would have done. But Jesus didn’t. It was the tax collectors and other publicly identifiable sinners who were drawing near to Jesus, and the Pharisees and the scribes thought that was disgraceful. Tax collectors were considered especially bad for a couple of reasons: They were working for the pagan Roman Empire that was occupying their land. And they had a reputation for being corrupt, lining their own pockets. A good religious teacher should not associate with such low disreputable people like that. And there were other bad people who were drawing near to hear Jesus, too. And so the Pharisees and scribes said with a sneer, “This man receives sinners and eats with them.” Notice, they don’t even refer to Jesus by his name, they call him “this man.” You can just hear the disgust and the disapproval dripping from their lips.

“This man receives sinners.” What the scribes and Pharisees meant as an insult Jesus turns around and wears it as a badge of honor. What he’s going to be telling them is this: “You boys are missing the point! You’re missing what God is doing here. If you understood, if you got it, you would not be complaining, you would be rejoicing! You should be rejoicing!” For what God is doing here in Jesus receiving these sinners is precisely the purpose of his coming! This is the mission that God sent his Son on, namely, to seek and to save the lost, to bring them back home. “That should bring joy to your hearts, not condemnation.” So Jesus tells them a couple of stories that illustrate the point. The first one is about a shepherd who goes out to search for one lost sheep. He finds the lost sheep, who would not be able to survive on its own. He picks up that sheep and lays it across his shoulders and carries it back to the flock. When he gets home, he calls his friends to come and celebrate with him, to rejoice over his finding the lost sheep. “Rejoice with me, for I have found my sheep that was lost.”

Jesus is trying to get through to these scribes and Pharisees that what he is doing should be a cause for rejoicing, not grumbling. He lays it out pretty straightforward: “Just so, I tell you, there will be more joy in heaven over one sinner who repents than over ninety-nine righteous persons who need no repentance.” If heaven is rejoicing over sinners who repent and are brought back home–which is what Jesus has been doing–if heaven is rejoicing, how come you guys aren’t? In fact, not only are you not rejoicing at Jesus finding sinners, you don’t even admit that you yourselves need to repent. You scribes and Pharisees don’t realize that you are sinners just like the tax collectors are.

And the second story is much like the first. This time it’s a lost coin. A woman searches and searches until she finds it. When she does, she’s so happy, she invites her friends to rejoice with her. Same point. Heaven is rejoicing over one lost sinner who repents. You guys aren’t rejoicing. You’re complaining. What’s wrong with this picture?

Indeed, what’s wrong is that the Pharisees and the scribes could not see themselves in the picture. They hadn’t been searching for lost sinners like Jesus had. They aren’t rejoicing with Jesus when he does find them. And they don’t even see themselves as sinners in need of repentance. Instead, they make themselves feel good by looking down on the bad people and looking down on Jesus for receiving such lousy sinners.

Friends, where do we see ourselves in the picture that Jesus paints? Do we see ourselves as above the bad people, so proud of our goodness that we make ourselves feel good by comparing ourselves to the lowlifes? Do we get a little uncomfortable when someone with a disreputable past might find their way into our church, because they’ve heard Jesus is here and that he receives sinners? Most of all, do we recognize that we ourselves are sinners who would be lost, without any hope, unless Jesus had come and rescued us and brought us back home?

Because that is indeed the truth. Even if we have not fallen into blatant, easy-to-recognize shame and vice, even if we have lived a fairly respectable life, we still must confess, “I a poor miserable sinner.” For God judges not only our outward actions, but also our inner hearts and our secret sins in thought, word, and deed. There is no escaping the label of sinner. If you think you’re not, you’re just kidding yourself. But you’re not fooling God.

But here’s the good news: Jesus came to seek and to save sinners just like you and me! He received the tax collectors and other known sinners. He will receive us religious sinners, too. The thing to do with sins is not to deny them but to confess them. Recognize that you are a sinner in need of forgiveness. Jesus came precisely to give you the forgiveness you need. He did this by going to the cross for you. That is where Jesus did the big rescue job. He laid your sins on his shoulders and carried them to the cross. There the innocent Son of God died for poor miserable sinners like you and me. By his holy blood our sins are forgiven. By his victorious resurrection from the dead, we have life in his name, new life and eternal life.

Now some sins are pretty blatant, and the sinners easy to recognize. Back in Jesus’ day, that included those crooked tax collectors. St. Paul has a list of sinners in the Epistle reading from 1 Timothy. He mentions “the lawless and disobedient, the ungodly and sinners, the unholy and profane, those who strike their fathers and mothers, murderers, the sexually immoral, men who practice homosexuality, enslavers, liars, perjurers, and whatever else is contrary to sound doctrine.” And certainly God’s law needs to be applied to unrepentant sinners like these, who are proud of their sins. They need to recognize their sin as damnable sin. The law needs to crush their pride and drive them to despair of their own goodness. They need to realize they have no righteousness of their own, but must turn to God for mercy and the righteousness that only Christ can provide. You see, the fact that Jesus receives sinners does not mean that God condones or winks at sin or wants us to continue in our sins. Far from it! Rather, God wants all men to come to repentance, both really bad disreputable sinners and comparatively mild respectable sinners–God wants all of us to come to repentance and to find our life and our righteousness and our salvation in Christ Jesus alone.

And when that happens, not only does Jesus receive us, not only does he rejoice over us, Jesus also restores us and gives us new direction and purpose in our life. Jesus puts us into service in his kingdom. It doesn’t matter how far we have gone astray. When Jesus restores us, we have a purpose and a calling in our life, to live out our vocation in this world in service to God and to our neighbor.

That’s what happened with Paul himself in his own life. Before he was called to be an apostle, as Saul, he had thought he was doing God a service by persecuting the Christians. Paul, Saul, had been one of those very zealous self-righteous Pharisees like we saw in the Gospel reading. But Jesus even brought Paul to repentance, so that he recognized how far off the beam he had gotten. Paul reflects on this. He never forgot it. As he writes to Timothy, Paul thanks Christ for appointing him to his service, even though he had been “a blasphemer, persecutor, and insolent opponent.” But the mercy and grace of our Lord overflowed for Paul. “The saying is trustworthy and deserving of full acceptance, that Christ Jesus came into the world to save sinners, of whom I am the foremost.” Christ saved Paul, the chief of sinners, and restored him and gave him the privilege of being his apostle, to preach the gospel he formerly persecuted.

So it is for you, dear friends. When Jesus forgives you, he also gives you new life and new opportunities for service in his kingdom. You may not be called to be an apostle, but you do have a vocation to live out in God’s service. Husband, wife, father, mother, son, daughter, worker, employer, citizen, church member, or pastor–whatever your calling or callings in life, Jesus has restored you and given you the dignity to live for him, “to live under him in his kingdom and serve him in everlasting righteousness, innocence, and blessedness.”

Brothers and sisters in Christ, where do you see yourself in the picture that Jesus paints for us today? See yourself with Jesus, as a sinner found by him and brought back home. For the truth of the matter is, Jesus receives, rejoices over, and restores sinners just like you and me.