Suppose you’re invited to a banquet–a wedding banquet, for instance–so you get dressed up in your best clothes, and you get there, and you see some seats that are open at the various tables. You figure you’re a pretty important person, or you’d like to be seen as such, so you go up and take a seat up front, maybe even at the head table. But then some other guy comes in, and he doesn’t look all that impressive, and the host or the waiter comes over and tells you that you need to move down so that this guy can sit up front. Well, you wouldn’t like that very much, would you? You would feel put out and embarrassed. “Why don’t I get one of the top spots? And who is this guy that he should get more attention and a better place than I do?” Well, that’s kind of the situation Jesus describes in today’s Gospel reading from Luke 14. But what Jesus has in mind is more important than mere dinner etiquette or table manners. What Christ has to say to us has to do with our place before God, our place in God’s kingdom, our place for eternity at the heavenly wedding banquet. Better to be called to move up higher than to be told to move down. Thus our theme this morning: “Friend, Move Up Higher.”

Our text takes place at a house where Jesus had been invited for supper. Jesus often got invited to dine at someone’s house. He had become a well-known figure, with some interesting–and controversial–things to say about religious matters. The dinner guests who were there on this occasion included a number of Pharisees, and they were keeping a close eye on him. They had heard about this traveling rabbi, and they wanted to see him up close and in person. No doubt some of them were looking for something they could catch Jesus on, to trip him up and trap him. “They were watching him carefully,” it says.

Little did they realize, though, that Jesus was carefully watching them. “He noticed,” it says, “he noticed how they chose the places of honor.” And not only did he notice their behavior, he also knew their motives. You see, Jesus could read people like a book. In John’s gospel it says that Jesus “knew what was in a man,” that is, in a person’s very heart and mind. That’s because Jesus is true God, and thus he knows the innermost thoughts of his creatures.

God sees all and knows all. There is no fooling him. There is no hiding from him. If we think that our sins are hidden from God, well, we need to think again. Even sins like pride and envy and coveting–secret things no one can see–God sees. He knows what’s going on inside of us. God knows our deceitful hearts even better than we do.

And so Jesus, the Son of God, knew the sinful pride that was motivating these guests at the dinner table. Their biggest concern was to look good in the eyes of others. The Pharisees as a group particularly had this desire for recognition. On a number of occasions Jesus called them out on it. “Woe to you Pharisees,” he said, “because you love the most important seats in the synagogues and greetings in the marketplaces.” On another occasion he said of the Pharisees, “Everything they do is done for men to see.”

So it was when it came to banquet seating. Their desire was to be seen as important, and it caused them to compete for the prime places. Jesus knew this. He read it in their hearts. And so he tells them: “When you are invited by someone to a wedding feast, do not sit down in a place of honor, lest someone more distinguished than you be invited by him, and he who invited you both will come and say to you, ‘Give your place to this person,’ and then you will begin with shame to take the lowest place.”

Jesus here is talking on their level, in terms the Pharisees could understand. They had a strong interest not only in seeking honor, but also in avoiding shame. And so, on a practical level, Jesus’ advice might make sense to them. They didn’t want to do anything that might cause them to lose face.

But at the same time Jesus here is exposing their shallow concern for attention. He cuts through their pious facade and shows them what is really in their heart. It’s like he’s saying, “I can see what’s really going on inside of you. You’re not fooling me. You’re not fooling God, either.”

Jesus continues: “But when you are invited, go and sit in the lowest place, so that when your host comes he may say to you, ‘Friend, move up higher.’ Then you will be honored in the presence of all who sit at table with you.”

Obviously, Jesus is not interested here in giving the Pharisees just a better strategy for gaining attention. Like, “Taking the high spot is risky; you might get called back down. So better to take a low spot and get called up. That’s a safer way to get the attention you crave and to look good in front of others. Try the false humility angle.” No, Jesus is not advocating that.

But by speaking to the Pharisees on a level they can understand–something that would appeal to their self-interest and their desire to look good–Jesus is exposing their desire for prestige as their real main concern. That was their god. That was their idol. And Jesus is saying, “I see that desire inside of you. God sees it, too. He knows what is in your heart.”

Jesus here exposes the dark and hidden recesses of the human heart. He shows us the pride and self-centeredness that lurk inside every one of us. For we all do this, in one way or another. Like the Pharisees, we like to look good in front of others and be recognized. And we do this at the expense of humbly trusting in God and serving our neighbor. In many different ways, we do that same thing every day. Ask yourself: How have I been advancing myself and my own interests at the expense of others? Have I been trusting in God even when I’m not getting the attention or respect I think I deserve? Have I been seeking God’s approval or the popularity of my peers? The answers to these questions will reveal the heart of a sinner.

Jesus would have us realize that and admit it, so that we will come to him for mercy–so that we will come to the place of repentance and be in a position to receive God’s help. For until we realize how low we are, we don’t realize how much we need God’s grace to lift us up. But once I know that God knows my sinful heart, all that’s left to me then is true humility. I can admit that I am a poor miserable sinner in need of God’s mercy.

Now Jesus sums it up: “For everyone who exalts himself will be humbled, and he who humbles himself will be exalted.” This is a truth running throughout the Bible. It’s all over the place: “God resists the proud but gives grace to the humble.” “God brings down the mighty and exalts those of humble estate.” “Humble yourselves under the mighty hand of God so that he may exalt you.” And so on. The point is clear: Don’t advance yourself before God with your pride and accomplishments and your supposed goodness. That won’t work. Rather, let God advance you, out of his mercy and grace in Christ. Come to God as a sinner in need of forgiveness, rely on Christ and his righteousness, and this is how you will be moved up higher.

“Everyone who exalts himself,” before God, “will be humbled,” by God. “He who humbles himself,” before God, “will be exalted,” by God. Jesus here is giving us the key to true exaltation–the kind that comes when God lifts up a helpless and undeserving sinner. Repentance and faith are the aim of Jesus’ teaching: Repentance that admits our sin and our need. Faith in God’s promise to forgive us and lift us up and give us better than we deserve.

God lifts us up because his Son Jesus Christ was lifted up–on the cross. Christ Jesus came and took the lowest place, our place, the place of a sinner condemned to die. Jesus took your place, he took your sins and died the death that you deserve, so that you would not die eternally. He came that you might live, live forever! Philippians says of Christ: “He humbled himself and became obedient to death–even death on a cross. Therefore God has highly exalted him.” Yes, our risen and ascended Savior has been highly exalted, and we find our life and our security in him.

And now as God’s people, we have this same mind among ourselves, which is ours in Christ Jesus, to live humbly toward one another and to walk humbly before our God. To take the lower part and to let God exalt us. This is the way of greatness in God’s kingdom. 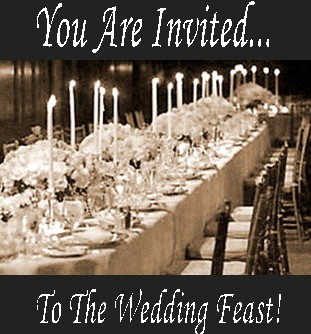 Joined to Jesus by faith, you and I now have the undeserved honor of dining at Christ’s banqueting table. Now we have the freedom, as God’s forgiven people, to “move on up”–to enter into the presence of the holy God, to seek him in prayer, and to sing his praises. Now, in Christ, we have the security we need to be able to lower ourselves and to serve our neighbor at the point of his need. For we have moved up higher, by Christ’s gracious invitation.

“Friend, move up higher.” Today move up and take your place at this altar, where you will receive the bread of life and the cup of salvation. My friends, you are invited to the wedding feast! It is the wedding feast of the Lamb in his kingdom, which will have no end. And it begins right here, at this foretaste of the feast to come. Christ, the host, is inviting you, saying, “Friend, move up higher.”