Yeah, this is one of those Gospel readings that make you shake your head and wonder what’s going on. The Jesus we meet here is not one that fits the popular image of Jesus: a soft and soothing speaker who spins out platitudes that people like to hear. But it is the Jesus who really was and is.

“Gentle Jesus, meek and mild”: This is the popular image of Jesus, isn’t it? Jesus strolling through the meadows with a sheep across his shoulders. Jesus sitting among the children, like the Mr. Rogers of Palestine. This is the soft and cuddly Jesus, non-offensive and easy to take. Jesus teaching on the hillside, enlightening the multitudes with a message of “peace” and “love.” Tolerant Jesus. Jesus as life coach, dispensing good advice on how to live a successful life. This is a Jesus that people of other religions–even people of no religion–can be OK with and accept. A Jesus who makes no demands. A Jesus who doesn’t interfere with what I want to do. If your Jesus works for you, fine. But if I don’t want him, that’s OK, too.

There’s one problem, though. The Jesus I’ve just described is a Jesus who doesn’t exist. Not in that one-dimensional kind of a form, at least. This is certainly not the Jesus we encounter in the New Testament–in today’s Gospel reading, for example. There Jesus says: “I came to cast fire on the earth, and would that it were already kindled! I have a baptism to be baptized with, and how great is my distress until it is accomplished! Do you think that I have come to give peace on earth? No, I tell you, but rather division.”

“Gentle Jesus, meek and mild”? Hardly! This is more like “angry Jesus, bleak and wild.” Here we meet an intense, fiery Jesus. But this is the same Jesus who is our Savior. So let’s listen now as our Lord speaks to us of “Fire, Distress, and Division.” 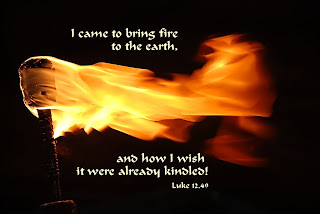 First, fire. Jesus says, “I came to cast fire on the earth, and would that it were already kindled!” The image of a blazing fire is, in Scripture, almost entirely a negative one. Fire, in the biblical vocabulary, is a sign of judgment, God’s end-time judgment. Of course, Jesus did not come primarily to bring fire and judgment on the earth. He came to bring healing in his wings. He came to bring salvation. But judgment and fire are the consequence, the result, the inevitable fallout when men reject and scorn God’s one appointed way of salvation.

John chapter 3 puts it like this: “For God did not send his Son into the world to condemn the world, but in order that the world might be saved through him. Whoever believes in him is not condemned, but whoever does not believe is condemned already, because he has not believed in the name of the only Son of God.” The primary aim is salvation, but when men reject the Savior, the consequent result is that they stay stuck in their sins and condemnation.

So here in Luke 12, when Jesus says, “I came to cast fire on the earth, and would that it were already kindled!” he is speaking of the fiery end-time judgment that he himself will bring to pass, when he comes again in glory on the Last Day to judge the living and the dead.

But before then, Jesus has something else to do, and that is actually something that will happen to him. It is a baptism: “I have a baptism to be baptized with, and how great is my distress until it is accomplished!” What is this “baptism” that Jesus speaks of here? He says it’s a greatly distressing baptism, and one that has not yet been accomplished. But had not Jesus already been baptized, in the Jordan River, at the start of his public ministry? And that baptism did not seem so distressing at the time.

But think about it again. When Jesus was baptized at the Jordan, that baptism did set him on a distressing course, a course that was not yet completed. Remember why people were being baptized at the Jordan in the first place. It was a baptism of repentance for the forgiveness of sins. People came confessing their sins. But Jesus had no sins of his own. Yet he was baptized. This showed the distressing course that Jesus was setting out on. For at his baptism, Christ, the sinless Son of God, was identifying with us poor sinners, taking our sins upon himself. Behold, the Lamb of God, who is taking up and taking away the sin of the world! A heavy load was laid on Jesus at his baptism. He took it up willingly, for you, and he would take that load of your sin all the way to the cross. 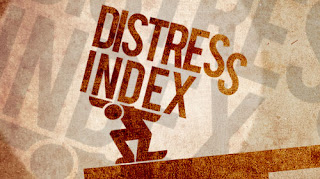 Jesus Christ, true God, and also true man–a man with true feelings and emotions. And so this way of the cross–this stressful baptism of suffering that Jesus was undergoing–this was no walk in the park. Indeed, it hurt, deeply. “How great is my distress!” he cries out. The Greek word here for distress has the idea of being pressed hard together. Can you sense the extreme pressure Jesus was feeling? Jesus was really stressed out! This was a very stressful experience, this baptism of suffering. And it would only get more stressful as Jesus heads to Jerusalem. Think of the agony Jesus would endure in Gethsemane on the night he was betrayed.

“I have a baptism to be baptized with, and how great is my distress until it is accomplished!” This baptism would be accomplished, completed, brought to its conclusion. Again, the Greek wording is helpful. The word for “accomplished” here means to reach the goal, to finish the course. It’s the same word that’s used when Jesus cries out on the cross, “It is finished!” “It is accomplished, the goal has been reached.” For on the cross, Jesus’ baptism of suffering would be completed. There he would reach the goal and finish the course. Mission accomplished. Sins atoned for. The price has been paid, your debt has been covered, paid in full, by Jesus’ holy blood. The victory is total, the triumph complete. Sin, death, and hell–all vanquished. Forgiveness, life, and salvation are yours.

Jesus’ baptism of suffering means your baptism from death into life. For in your baptism, you were joined to Christ and his baptism. The holy cross was signed onto you. You were marked as one redeemed by Christ the crucified. Now you belong to God and to his family, the church. Now you and I are heirs of heaven, for we will share in Christ’s resurrection. Now, by faith in Christ, our life is different from the dead-end course of the world all around us. But that does make us different. And being different, being the distinctive people of God in a hostile world–that sets us apart. It sets us at odds with those who hate God, who don’t believe in the one true God, who don’t follow Christ, and who therefore don’t like us. The dividing lines are being drawn. Jesus anticipates those dividing lines of faith and unbelief when he says, “Do you think that I have come to give peace on earth? No, I tell you, but rather division.”

This has been a long division, a very long division indeed. We read about it in the New Testament, where many people come to faith in Christ, but many others reject the faith, either persecuting it outright or else perverting the faith through false doctrine. And that sort of division continues to this day. You, dear Christian, you have been led by the Holy Spirit to believe in Jesus Christ, your Savior, the only one who can rescue you from the fire of God’s judgment. But many others scorn the Christ, assail his ways. Not always through outright persecution. Sometimes through a subtle watering down of the faith. Sometimes through their apathy, indifference, and neglect, people say “no” to Christ.

So the dividing lines are falling, and they cut right through the hard heart and stubborn unbelief of man. And those dividing lines can cut through a family. Jesus says: “From now on in one house there will be five divided, three against two and two against three. They will be divided, father against son and son against father, mother against daughter and daughter against mother, mother-in-law against her daughter-in-law and daughter-in-law against mother-in-law.”

Maybe you know of families like that. Maybe you’re in a family like that. Some of the family members believe in Christ and gladly take part in his church. But others in the family couldn’t care less. They have no interest in Christ. They want nothing to do with his church. It’s tough when you’re in a family like that. But we shouldn’t be too surprised that it happens. Jesus told us in advance that that is exactly what would happen, as he says right here in our text.

Fire, distress, and division. When the fallout reaches you, don’t be shocked. But do take shelter. Find your refuge in the cross of Christ and the promises of God. When you feel all stressed out, remember the great distress that Jesus endured for you. Through his distressing baptism of suffering, Christ accomplished your eternal salvation. And you are baptized into Christ. In him you do have peace, a peace that the world cannot give, a peace that the world cannot take away. Through fire, distress, and division, this Jesus is yours. Yes, this is the Gospel of the Lord!