Paul writes, in Colossians 2:6-7: “Therefore, as you received Christ Jesus the Lord, so walk in him, rooted and built up in him and established in the faith, just as you were taught, abounding in thanksgiving.” Here we have all three aspects, the “Raised,” the “Rooted,” and the “Walking.” “But wait,” you say. “I see the ‘Rooted’ and the ‘Walking,’ but I don’t see the ‘Raised’ that you mentioned.” Oh, it’s there alright. It’s included in what Paul says about “as you received Christ Jesus the Lord.” Because how you “received” Christ is by God raising you up. God had to raise you from death to life. That’s how it works. 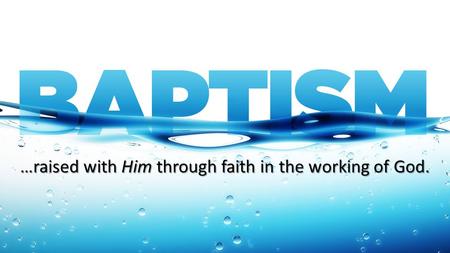 And Paul speaks of this raising just a few verses later in our text. He says that you and I have been buried with Christ in baptism, “in which you were also raised with him through faith in the powerful working of God, who raised him from the dead. And you, who were dead in your trespasses and the uncircumcision of your flesh, God made alive together with him, having forgiven us all our trespasses, by canceling the record of debt that stood against us with its legal demands. This he set aside, nailing it to the cross. He disarmed the rulers and authorities and put them to open shame, by triumphing over them in him.”

Raised from death to life. Raised with Christ. Raised with him in baptism. This is how you received Christ. You needed to be raised, because you were dead and could not raise yourself. “You were dead in your trespasses and the uncircumcision of your flesh.” That was your natural state, apart from Christ. Dead. And dead men don’t raise themselves. You were dead in your trespasses. Dead from birth. You have this inherited sinful nature, you see, passed down from our first parents. And like Adam and Eve when they ate from the forbidden fruit, we went trespassing where God had set up a “No Trespassing” sign. Ten “No Trespassing” signs, actually, called the Ten Commandments. We set up for ourselves other gods, whether called money, pleasure, recreation, you name it–in fact you are it, the false god you worship in place of our Creator. And from there come all our other breaking of the commandments, against God and against our neighbor. These are the trespasses where we have gone over the line that God has said we should not go. And so we were dead in our trespasses, according to our sinful flesh.

But thank God, God is in the business of forgiving trespasses. It’s what he does. And it’s because of what Christ has done for us. Christ Jesus, the Son of God, “in whom the whole fullness of deity dwells bodily.” Think about that for a moment. The whole fullness of deity dwells bodily in Christ. He who is true God, the eternal Son of the Father, came down from heaven and was made man for us, in a body like ours. He did this so he could go to the cross for us and die there in our place. This is how we are forgiven. All our trespasses were nailed to the cross with Jesus. His holy blood cancels the record of our debt. It has been paid in full. Tetelestai, “It is finished,” Jesus cried from the cross.

By Christ’s death on the cross, God has won the victory over the devil and all the forces of hell, triumphing over them in Christ. God has won the victory over death, raising Christ from the dead on Easter Day. And now in Christ, you share in that victory. God has raised you from death to life. Your old man of sin was buried with Christ in baptism, and in that same baptism you were raised with Christ to newness of life and to eternal life. Now you trust in Christ. Your faith rests in the powerful working of God for your salvation, not in yourself.

So this is how God raised you from death to life, with Christ, in baptism. It is by God’s working that you received Christ Jesus the Lord. Therefore, now, be “rooted and built up in him and established in the faith.” God has brought you to new life. Now grow and become strong in that life. How does this happen? Through the word. The word of God is what will mature you and strengthen you in the faith. God would have your roots sink deep into the good soil of his word, where you will be nourished and be healthy and bear fruit, good fruit, in your life.

Let’s get specific. To be rooted and built up and established means being regular in church, attending the services of God’s house, where the word of God is preached and sacramented. Participating in Bible classes, too, to grow in your knowledge and understanding of the word. Here in church Christ is present according to his promise, “Where two or three are gathered together in my name, there am I, in the midst of them. Here in church we hear our Lord’s voice. Here he forgives our sins, as we receive his holy body and blood in the Sacrament. Here is where we are built up as the church, the spiritual household made up of Christ’s living stones, formed to carry out Christ’s mission together. To be established in the faith means that this is a settled matter for us, that we are not being tossed to and fro by every wind of doctrine. Maturity, spiritual maturity–this is God’s aim for us as his people, and he has provided the means for this to happen, in the blessed means of grace, Word and Sacrament. This is foundational for our Christian life. Rooted and built up in Christ, established in the faith.

How is this working for you? You are here today. Will you be here next week? How about the week after that? And the next? And the next? You see, this is the normal pattern for Christian discipleship: to be regular in God’s house and in God’s word. Is there room for you to grow in this? Ask God for his help. He loves to answer prayer, especially prayers like that.

And how about in your daily life, Monday through Saturday? Are you finding time daily to meditate on God’s word and to call on him in prayer? Perhaps we all can grow in this area. I know I can. Daily devotions–there are resources for this to help you. Just ask.

It is important that you be rooted and built up and established in the faith, lest you be drawn away and led astray by deceptive words and teachings. Paul warns of this very thing: “See to it that no one takes you captive by philosophy and empty deceit, according to human tradition, according to the elemental spirits of the world, and not according to Christ.” There are all kinds of false teachings floating around, now as back then. We need to be discerning, so as to be able to distinguish truth from error. And that discernment comes as we are firmly grounded in the faith, as we are taught.

“Therefore, as you received Christ Jesus the Lord, so walk in him, rooted and built up in him and established in the faith, just as you were taught, abounding in thanksgiving.” Raised, rooted, and now, walking. The Christian life is not a static life. We don’t stand still. We don’t just sit in a pew all week, withdrawing ourselves from the world. No. We are rooted in Christ, to be sure. But these roots are made for walking.

“So walk in him, rooted and built up in him.” Paul is speaking of the conduct of our life from day to day, shaped by our union with Christ. How we live out our calling, our identity as Christians. We are built up to be sent out. The Christian life is a living, active thing. It is a life marked by love, love for God and love for neighbor. Indeed, our love for God is shown in our love for neighbor. To love one another, as brothers and sisters in Christ. To do good to those in the household of faith–to do good to all men, reflecting the love and compassion of Christ–this is how we walk in him.

As you walk in Christ this week, where will that walk take you? Will you find people in your path who could use your help? Will you be ready to stop and help, to extend that hand of mercy, or instead will you walk by on the other side? Ask God to keep your eyes open, your ears attentive, and your feet and hands responsive to the opportunities that present themselves this week, as you walk in Christ.

Raised, rooted, and walking. Raised with Christ. Rooted in Christ. Walking in him. Raised from death to life, in baptism. Rooted and built up and established in the faith, through the word. Walking in a life of love and good works. Raised, rooted, and walking: This is the Christian life. This is your life. It is all by God’s powerful working. And we give thanks to God for it.