In this presidential election year, we look around at the various candidates in both parties, and we ask ourselves, “Who is worthy? Who is worthy of holding the highest office in the land?” And we look at the candidates, and we examine and scrutinize their various failings and shortcomings, and we say to ourselves, “I’m not sure if any of them are worthy! Is there no one out there I can put my confidence in, someone I can trust to hold this high office and do the right thing? After all, the presidency is a position of great power and authority, and the person in this office will have a significant impact on determining the course of our immediate future. So who is worthy of this high honor and this great responsibility? Maybe no one.” You know, as we look at the world around us, it can look like this world is spinning out of control. Like no one is in charge. Events on the world stage are looking so bleak, so dismal. ISIS is on the rampage. They blow up innocent people at a Brussels airport. In Pakistan, Christians at an Easter celebration in a park–a suicide bomber comes and kills over 70 of them. Here in this country, our religious liberty is under attack. Christians are being persecuted and prosecuted for holding to their beliefs. The culture continues its long downward slide. Is anyone in charge here? What does the future hold? Is it only going to get worse?

But then this is nothing new. The Christians in the late first century could look around and see their world and wonder what was going on. Things looked so bleak for the Christians in those days. The Roman Empire was a hostile environment for the Christian church. Depending on the emperor at the time, the persecution of Christians could be pervasive and empire-wide or more localized and concentrated in certain places. But in either case, Christians were suffering at the hands of Jews and Gentiles alike. False teachers were arising to lead Christians astray, to lead them away from the truth. In other words, the world was much like it is today. In that kind of a situation, then and now, Christians are wondering: “What will happen to our world? What will happen to us and to our children in this world? Is God still in charge? Why does it seem like things are out of control and only getting worse? Where are you, God?”

So St. John has this vision. He’s taken up in the Spirit to the heavenly throne room. He gets to see things from up there, from God’s perspective. This changes his outlook on things. And he is told to pass along what he sees, for our encouragement amid our perplexity. Remember, John himself had been suffering. John, now an old man, the last of the apostles–John had been exiled to the isle of Patmos “on account of the word of God and the testimony of Jesus.” And he is given a message to deliver to the suffering church, both of his day and of ours.

In Revelation 4, John is given a glimpse of God the Father on his throne, with all the company of heaven worshiping him, saying, “Worthy are you, our Lord and God, to receive glory and honor and power, for you created all things, and by your will they existed and were created.”

Then we move into chapter 5. John sees that God has in his hand a scroll, written on both sides, and sealed with seven seals. Since John has been told he would have revealed to him the things that are to come on this earth, this scroll presumably contains those things that are to come, waiting to be revealed. But the scroll is sealed, seven times over. Is the future then going to remain hidden, so that we must remain in despair and bewilderment about our future? The cry goes out: “Who is worthy to open the scroll and break its seals?” Look around: No one is found worthy to do so. No one is worthy enough to open the scroll or look into it.

And certainly that includes us. We are not worthy. By no means. On our own, we would have no insight into the future, so as to have any hope. Bleak and dismal indeed would be our prospects, since we are so riddled with sin. How can we know that God is for us and that things will work out for good, in spite of how they look? We could not do so.

No, there is no one to be found who is worthy of opening the scroll and revealing the future. And so John begins to weep at this gloomy realization. Until. . . . Then someone says to John, “Weep no more; behold, the Lion of the tribe of Judah, the Root of David, has conquered, so that he can open the scroll and its seven seals.”

Yes, there is one who is worthy! He is here called “the Lion of the tribe of Judah, the Root of David.” Meaning, he is the mighty Messiah, promised from of old, the great Davidic king, prophesied centuries earlier. He has conquered his foes, he is victorious, and so he is worthy to unroll the scroll and unfold the future.

So now we are prepared to see this Lion of Judah, this mighty Messiah, this conquering king. And we look, with John, and what do we see? John tells us: “I saw a Lamb standing, as though it had been slain, with seven horns and with seven eyes, which are the seven spirits of God sent out into all the earth. And he went and took the scroll from the right hand of him who was seated on the throne.”

Huh? This does not compute! A Lamb, as though it had been slain? A slaughtered Lamb? How can that be the Lion of Judah? How can that be the mighty Messiah? But it is. And this is how he conquered in the fight, precisely by being the Lamb that was slain. Jesus Christ came as the Lamb of God who takes away the sin of the world. The lamb is the animal of sacrifice, and Jesus has made sacrifice for our sin, for your sin, so that now it is not held against you, and death is conquered and stripped of its power. “By his death he has destroyed death, and by his rising to life again he has won for us everlasting life.” This is the Easter victory that Jesus won for you! And he did it by being the Lamb who was slain. This is how Jesus is ruling in heaven, even as we speak. So he gets to open the scroll and break the seals. And at this there is worship in heaven: “Worthy are you to take the scroll and to open its seals, for you were slain, and by your blood you ransomed people for God from every tribe and language and people and nation, and you have made them a kingdom and priests to our God, and they shall reign on the earth.”

“By his blood.” Yes, by his holy precious blood, shed on the cross, the Son of God has redeemed and ransomed us from all sins, from death, and from the power of the devil. We have been set free! And Jesus did this for all the people of the world, from every people and language and nation. For Americans and Europeans and Africans and Asians. For Pakistanis and Belgians and the people of Bonne Terre–Jesus is your liberator! There is no other! He is the only one worthy. He is the only one who can save you. Trust in him, and not in yourself. Trust in him, not in the false gods of man’s own making. Trust in Jesus, and you will be saved.

There is hope for your future, in Christ, even when it looks like this world is spinning out of control. The course of history is on course. Christ is seated at the right hand of God, and he is governing all things for the sake of the church. The church has a mission to carry out in this world, and Jesus will see us through to do it. He does this even through a suffering church. “I will build my church, and the gates of hell shall not prevail against it.” The blood of the martyrs is the seed of the church. It may not make sense from our perspective, but it does from God’s. Rest assured, church, God has not abandoned you. Jesus is watching out for you. He has opened the scroll and broken its seals. Even as he broke through a sealed tomb. Death could not hold him. Fear not the foe who means you woe. Christ has already overpowered him. Your future is secure in the one who holds the future, namely, Christ Jesus our Lord, the Lamb who was slain, who is risen, who is ruling right now, and who will return in glory. Who is worthy to unroll the scroll? Who is worthy of your trust? Answer: Worthy is the Lamb! And so today our worship joins with the worship of the angels and the archangels and all the company of heaven, gathered around the throne and singing, “Worthy is the Lamb who was slain, to receive power and wealth and wisdom and might and honor and glory and blessing!” And I can hear every creature in heaven and on earth and under the earth and in the sea, and all that is in them, saying:, “To him who sits on the throne and to the Lamb be blessing and honor and glory and might forever and ever!”

And all of God’s people said, “Amen!” 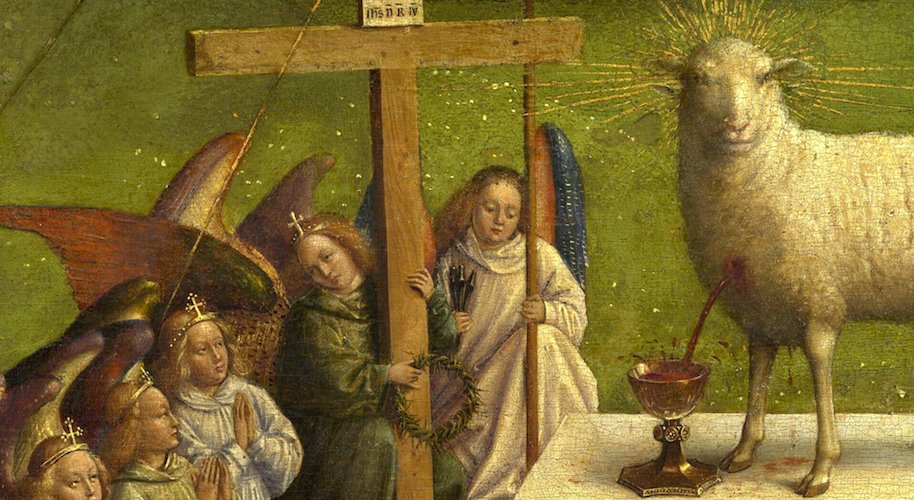