“A Whole New World”: Aladdin may sing about it, but God will deliver it. Are you looking forward to it? You should be, and today I’ll tell you why.

Yes, a whole new world. That’s what John sees in our reading today from Revelation 21. A new heaven, a new earth, a new Jerusalem. And he who is seated on the throne says, “Behold, I am making all things new.” We’re coming into the last two chapters of the Bible now, and we get a glimpse of where all this is headed. And it is new, and it is glorious, and it is something to be ardently looked forward to.

“Then I saw a new heaven and a new earth, for the first heaven and the first earth had passed away, and the sea was no more.” John has been witnessing the unfolding of history before his eyes, through a series of visions, and now he comes to the denouement, the resolution of all that has been revealed thus far, the goal toward which everything is going.

A whole new world. Why? What was wrong with the first one? Do I even need to ask that question? You see the world we live in. It is filled with death and destruction and decay. All around us we see sorrow and sadness and sickness. And all within us we see sin, sin lurking inside and making its way out in the things we say and do and think. This old world and our old sinful nature are pretty messed up, seriously in need of a major renovation project. Well, that’s what God is going to do. He’s going to make all things new.

A new heaven and a new earth. Here in Revelation we’re coming to the end of the Bible, as I say, but now think back to the beginning. “In the beginning God created the heavens and the earth.” “And God saw everything that he had made, and behold, it was very good.” Including the man and the woman. But then something happened. Sin entered the picture. Sin entered us. We rebelled against our Creator. We broke his commandment. We wanted to be our own God. And so the curse fell upon mankind. “Dust you are, and to dust you shall return.” The death sentence, being driven out of the garden and cut off from the tree of life. Discord, friction between husband and wife. Futility in work. Futility in creation. Things don’t work right. Nature itself gets fouled up. Disasters, death, and danger. And it’s been that way ever since. We could use a whole new world.

Isaiah had foretold it. Isaiah 65, where the Lord says: “For behold, I create new heavens and a new earth, and the former things shall not be remembered or come into mind. But be glad and rejoice forever in that which I create; for behold, I create Jerusalem to be a joy, and her people to be a gladness.” Isaiah had foretold it, and now in Revelation here it comes. New heavens and a new earth, and also a new Jerusalem: “And I saw the holy city, new Jerusalem, coming down out of heaven from God, prepared as a bride adorned for her husband.”

“O Jerusalem, Jerusalem, the city that kills the prophets and stones those who are sent to it!” Yet Jesus set his face to go to Jerusalem. “See, we are going up to Jerusalem. And the Son of Man will be delivered over to the chief priests and scribes, and they will condemn him to death.” Which is what happened, of course. Old Jerusalem had lost its holiness and missed its Messiah, rejecting the very king sent by God. And so God would send destruction on old Jerusalem in the form of a Roman army.

“Prepared as a bride adorned for her husband.” Oh, this city will be beautiful! “Glorious things of you are spoken, Zion, city of our God; He whose word cannot be broken formed you for his own abode.” And so it will be. “Behold, the dwelling place of God is with man. He will dwell with them, and they will be his people, and God himself will be with them as their God.” This is the fulfillment of God’s plan for the ages. God and mankind together again, at peace, reconciled, dwelling in harmony and sweet fellowship. Paradise restored. What was lost in the garden is restored in an even greater way in the new Jerusalem.

“He will wipe away every tear from their eyes, and death shall be no more, neither shall there be mourning nor crying nor pain anymore, for the former things have passed away.” Imagine this. What will be so wonderful about this whole new world is what will not be there, what is no longer there that is here now. No more death. No more tears. No more mourning or crying or pain. Disabilities and degenerative diseases–gone. Divorce and depression–over. Loss and loneliness–things of the past.

“Behold, I am making all things new.” Notice, God says he is making all things new. That is different from saying, “I am making all new things.” No, you will still be you. God is going to raise up your body, only it will no longer be subject to death and decay. No more breaking down. No more getting frail and wearing out. No, you will be fitted out for eternity, ready to go. You know, mankind was never meant to die in the first place. Our sin spoiled that. But when God makes all things new, our bodies will be renewed, restored, raised up whole and glorious, transformed and transfigured–a real physical body, your body, but perfected in a way we can’t even imagine now.

And this creation will be restored, too. At this time of year we see all the beauty of springtime in full bloom–dogwoods and redbuds and everything greening up. But now multiply that by about a bazillion and you might be approaching the beauty that is in store in the world to come. And God said to John, “It is done!” “It is done.” A fait accompli, a sealed deal, you can take it to the bank. “It is done!” John must have been reminded of a word he had heard years earlier: “It is finished.” That’s what Jesus said on the cross, as he was hanging there, dying for the sins of the world. And because Jesus did die for those sins, your sins and mine, our debt has been paid, the goal has been reached, and the deal has been sealed, good as gold. Jesus’ “It is finished” on the cross guarantees the “It is done” in the new Jerusalem. And the proof is in the resurrection of Christ, when he conquered the grave and opened the kingdom of heaven to all believers. “Because he lives, we shall live also.”

“It is done!” God says. “I am the Alpha and the Omega, the beginning and the end. To the thirsty I will give from the spring of the water of life without payment. The one who conquers will have this heritage, and I will be his God and he will be my son.” It’s all a gift, God’s free gift to you. Are you thirsty? Drink up. Drink from the spring of life-giving water he offers you free of charge. You get a taste of that today as you drink from the cup of blessing here in the Lord’s Supper, Christ’s own blood shed for you for the forgiveness of sins. “And where there is forgiveness of sins, there is also life and salvation.”

“And I will be his God and he will be my son.” I’m reminded of what John says in his epistle: “See what kind of love the Father has given us, that we should be called the children of God, and so we are. . . . Beloved, we are God’s children now, and what we will be has not yet appeared; but we know that when he appears we will be like him, because we shall see him as he is.” It’s from John’s epistle, but it really fits in with his vision of the new Jerusalem. Because one day we too will see this new Jerusalem. One day we will see this new heaven and the new earth. One day we will see the one seated on the throne, making all things new. We shall see him, and we will be at home, at last.

When will this take place? In a little while. It may seem like a long time to us, but in the big picture of things, it will only be a little while. “A little while, and you will see me,” our Savior says to his disciples. So hold tight, hold close to Christ. “Lift up your head, for your redemption draweth nigh.” “Weeping may endure for a night, but joy cometh in the morning.” 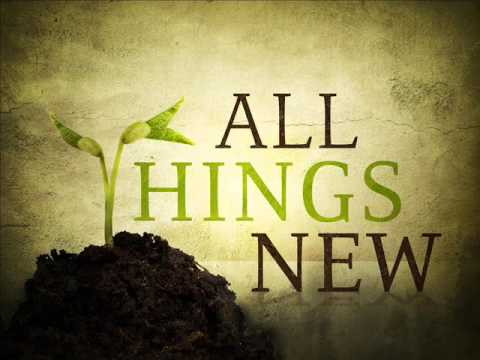 Yes, dear friends, a whole new world is on the way. A new heaven and a new earth. The holy city, new Jerusalem. A holy people, a new you, and a new us, God with us forever.

And he who was seated on the throne said, “Behold, I am making all things new.”