It’s Friday, and darkness falls over the land. On a cross, a man who has been nailed there is dying a shameful and agonizing death. Yet this is no criminal. This is the most righteous and innocent man who has ever walked the earth. Indeed, this is the very Son of God, come in the flesh. Why is this happening? Why is God allowing this to happen? And couldn’t this man Jesus, who displayed such amazing power on other occasions–couldn’t he have stopped this? So was this one gigantic screw-up by God, this gross miscarriage of justice? Things seem to be going haywire, out of control.

We get a clue as to whether or not things were out of control by some of the details that the gospel writers record. And one of those details is this, recorded in the Gospel of John, that “these things took place that the Scripture might be fulfilled.” And the Scripture that John says is being fulfilled is this verse that he quotes: “Not One of His Bones Will Be Broken.”

“Not one of his bones will be broken.” A curious point to bring out. Why mention it? What’s the big deal about Jesus dying without one of his bones being broken? But this little detail will tell us much about what was going on there that day. “For these things took place that the Scripture might be fulfilled: ‘Not one of his bones will be broken.’” What were “these things” that took place, and how did they fulfill Scripture? And which Scripture? Where in the Bible do we find this business about bones not being broken, and why does John make the connection here to the death of Jesus?

What were “these things” that took place? This is referring to what happened when Jesus died, specifically, that instead of his legs being broken, Jesus’ side was pierced with a spear. And this calls for a little explanation. It has to do with the process of crucifixion, the physiological process, and how the Romans dealt with the bodies of those who were crucified.

Crucifixion was one of the most cruel and painful methods of execution ever devised by man. We even get our word, “excruciating,” from the practice of “crucifixion.” And it was the Romans’ method of choice for putting non-Roman criminals to death in their empire, ones that they wanted to make an example of. Public crucifixion served as a very effective deterrent against crime. What would happen was, the soldiers would nail the criminal to the crossbeam, driving spikes through his hands, nail the man’s feet to the post, put the cross upright, and then let the man hang there to die. Death might come in hours, it might come in days, but it would come. And it would be excruciatingly painful. Every breath the man takes would cause him intense pain and effort. Being suspended vertically, with his arms and his chest stretched out, and with only his nailed feet to support him, the man would have to force himself up every time to draw a breath. And each time, the nails and the nerves and the effort would send a shockwave through his system. Eventually the shock and the trauma, the exposure and the effort, would prove too much, and the man would suffocate and die. But it could take a long time. And that was what was going on with these three criminals being crucified on this day.

But now this is taking place just outside Jerusalem, the capital of the Jews, and these three criminals are being crucified on a Friday, the day before the Jewish Sabbath. And not just any Sabbath, but the one that falls during Passover week. The Jewish religious leaders are taking a particular interest in this set of crucifixions, because one of the men crucified there is a man they really hate, Jesus of Nazareth. So they’re observing what’s going on. It’s getting on toward mid-afternoon on that Friday–only a few hours left until sundown and the start of the special Sabbath. And these Jewish religious leaders remember the law written in Deuteronomy about a hanged criminal’s body not being left on a tree overnight, lest that cursed body defile the land. Funny, they are so meticulous and attentive to a minor law like this, yet they reject and hate and murder the Lord of life come from heaven. But it’s Friday afternoon, Sabbath is coming soon, and so they want the bodies taken down right away. 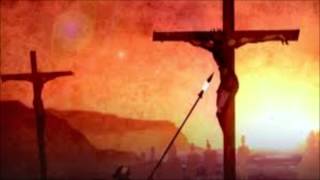 To hasten death or to certify that a crucified man was really dead–the Romans had a couple of methods for doing that. One was to take a heavy club and bash the man’s legs across the shin bones. With his legs broken, the man simply had no way to push himself up anymore to draw a breath, and death would come quickly. That is what the Roman soldiers do to hasten the death of the criminals on Jesus’ right and left: They break their legs. But evidently the Roman centurion in charge was deeply impressed with this man in the middle–we see that mentioned in the other gospels. That man, the man in the middle, who had acted and spoken so differently over the past few hours–he was not like your average ordinary criminal. There was something different and exceptional about him. And so the Roman centurion treats the body of Jesus in an exceptional manner. Besides that, they could see that Jesus was already dead, so there was no need to break his bones. But they do need to certify that this man is really dead, and so they thrust a spear through his side, through his lungs and heart.

Now all of this is looking at it from a human perspective, from the standpoint of the Jews and the Romans. But John, our gospel writer, sees God’s hand at work in all of this. These things took place to fulfill Scripture. These things–the crucifixion, even down to the details. All of this was according to plan. God was overseeing events. It was the will of the Lord for this man–his servant, his Son–to be stricken, smitten, and afflicted in this way. To suffer and die in this way. And even for his dead body to be handled in this way, that not one of his bones would be broken.

“For these things took place that the Scripture might be fulfilled: ‘Not one of his bones will be broken.’” But which Scripture is John quoting here? He doesn’t say. So we look back to the Old Testament for passages about bones not being broken. And the odd thing is, there are two likely candidates for a passage about one whose bones are not broken. Two different figures in the Old Testament, and yet you could make a case for either one of them being the Scripture that is being fulfilled here. The first is the figure of what we could call “the righteous sufferer.” There are many passages in the Old Testament, particularly in the Psalms, about a righteous man who trusts in the Lord and does his will–about a righteous man who suffers unjustly, innocently. One of these passages is in Psalm 34, reading from verses 19-20: “Many are the afflictions of the righteous, but the Lord delivers him out of them all. He keeps all his bones; not one of them is broken.” “Not one of them is broken”: Did you catch that? Here in Psalm 34 it says that the Lord is watching out for the righteous man, that he will deliver him from his afflictions, that he will protect him, so that not one of his bones will be broken. That sounds a lot like what John is quoting here in our text.

And certainly Jesus is a righteous man. Indeed, he is the most righteous man who has ever lived–the only perfectly righteous one, in fact. And no one has ever suffered more unjustly: The sinless, innocent one enduring a criminal’s sufferings and death. The Lord did not deliver this man out of his afflictions. Yet, even so, he did keep his bones from being broken. And this attests to Jesus being the righteous one, the righteous sufferer.

So that’s one possibility for the Scripture that Jesus is fulfilling here when his bones are not broken. But there’s another one as well. And that is the passage about the Passover lamb. Remember, it’s Passover time when Jesus is crucified. And the Passover lamb, the ultimate meaning of it, is being fulfilled right there in front of John’s eyes.

The story of the Passover lamb goes back many centuries, to the time when Israel was in bondage in Egypt. Then one night the Lord brought a final plague on Egypt that would enable the Israelites to escape to freedom. He would strike down all the firstborn in the land of Egypt, in every household. But in order to spare the homes of the Israelites from that plague of death, the Lord provided that a lamb should be slain–the Passover lamb, a lamb without blemish or defect–and its blood should be put on the doorposts and lintel of each Israelite home as a sign. Thus death would pass over, and the Israelites would be spared.

In the slaying of the Passover lamb, this special lamb without blemish or defect, special care was to be taken in the way it was killed. In Exodus 12 it says of the Passover lamb, “you shall not break any of its bones.” So here again is another Scripture that John could have in mind as being fulfilled when not one of Jesus’ bones is broken.

For Jesus truly is the fulfillment of the Passover lamb! By his holy precious blood, by his innocent suffering and death, you and I are spared from eternal death! His blood marks our doorposts! Death passes over, and we are brought out of our bondage to sin and death, and God leads us out into the freedom and new life we have in Christ. We are heading for the Promised Land of heaven.

Jesus is our Passover Lamb. “Behold, the Lamb of God, who takes away the sin of the world!” You have been redeemed “with the precious blood of Christ, like that of a lamb without blemish or spot.” My friends, this is what is going on in the death of Christ. He is being our Passover Lamb! And God attests to this fact, even down to the way his body is handled, that, like the Passover lamb, not one of his bones is broken.

“For these things took place that the Scripture might be fulfilled: ‘Not one of his bones will be broken.’” Jesus as the Righteous Sufferer. Jesus as the Passover Lamb. Both are true. Jesus is the Righteous Sufferer, par excellence. He suffers to bear your sins and give you his righteousness. And at the same time, Jesus is the Passover Lamb. His blood spares us and saves us from death and gives us eternal life. Both Righteous Sufferer and Passover Lamb. The Scriptures testify to it. John sees it. And on this Good Friday, John tells us about it: “He who saw it has borne witness–his testimony is true, and he knows that he is telling the truth–that you also may believe.”