21 Now when they dre 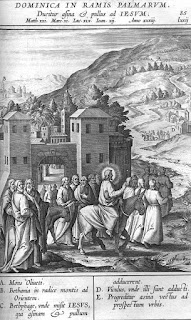 w near Jerusalem, and came to Bethphage, at the Mount of Olives, then Jesus sent two disciples, 2 saying to them, “Go into the village opposite you, and immediately you will find a donkey tied, and a colt with her. Loose them and bring them to Me. 3 And if anyone says anything to you, you shall say, ‘The Lord has need of them,’ and immediately he will send them.”
4 All this was done that it might be fulfilled which was spoken by the prophet, saying:
5 “Tell the daughter of Zion,
‘Behold, your King is coming to you,
Lowly, and sitting on a donkey,
A colt, the foal of a donkey.’”
6 So the disciples went and did as Jesus commanded them. 7 They brought the donkey and the colt, laid their clothes on them, and set Him on them. 8 And a very great multitude spread their clothes on the road; others cut down branches from the trees and spread them on the road. 9 Then the multitudes who went before and those who followed cried out, saying:
“Hosanna to the Son of David!
‘Blessed is He who comes in the name of the Lord!’
Hosanna in the highest!”
10 And when He had come into Jerusalem, all the city was moved, saying, “Who is this?”
11 So the multitudes said, “This is Jesus, the prophet from Nazareth of Galilee.”

This Gospel comprises two parts. In the first place, It exhorts us to accept King Christ, who comes to us, and at the same time reveals what this king brings us; that he is sent for our help. In the second place, It warns and arms us against the offense of the poor and lowly form of Christ.

1 And when they drew nigh unto Jeru salem, and were come to Bethphage, unto the mount of Olives, then sent Jesus two disciples,
2 Saying unto them, Go into the village over against you, and straightway ye shall find an ass tied, and a colt with her: loose them, and bring them unto me.
3 And if any man say aught unto you, ye shall say, The Lord hath need of them; and straightway he will send them.

The Lord hath need of them. The Lord does not want a flatterer for a preacher, as he does not say, Go around the village or along side of it; but go into it, resolutely, and tell them what they do not like to hear. This is also said for the comfort of the preachers, that they shall not be troubled as to who shall believe and receive them; for it is declared, (Isaiah 55:11) “My word shall not return unto me void.”

4 All this was done, that it might be fulfilled which was spoken by the prophet, saying,

That it might be fulfilled, etc. This prophecy is quoted by the evangelist, to let us see that Christ did not come on account of our merit, but on account of divine truth; since he was promised so long before, ere we to whom he was sent, had an existence. Romans 1:2.

In order that the Jews might not excuse themselves and say, If we had known that the Messiah would come so poor and lowly, we also would have attended to it, and received him; therefore the prophet (Zechariah) pointed this out to them so long time before.

5 Tell ye the daughter of Sion, Behold, thy King cometh unto thee, meek, and sitting upon an ass, and a colt the foal of an ass.

Behold thy king cometh. He says, “Tell the daughter of Zion, that she take no offense at his humble appearance; but close her eyes, and open her ears, see not how lowly he rides along, but hear what is said of this poor king. Thus it also appears a small thing, that through Baptism and the Sacrament so great things should be effected; but do not let thine eyes deceive thee.

He does not say, Speak about the daughter of Zion, but to herself shalt thou speak; she shall believe it of herself and without doubt, that it shall be to her, just as these words read, and not merely to others also.

With the words, behold, or take notice, he wakes us up from our sleep and unbelief, in that he would announce something great, unusual, remarkable, which had long been desired, and which should be received with joy. To reason and nature it is altogether disagreeable, that this should be the “King” of Jerusalem, who comes so poor and lowly.

It is thy King, says he; that is promised to thee, to whom thou belongest, who, and no other one, shall rule thee; he is thine, who art driven and plagued by sin, devil, death and hell, flesh and world.

He comes. Doubtless, thou comest not to him and bringest him; he is too high above thee, and too far from thee; with all thy trouble and labor thou canst not come to him. He comes “to thee.” He gives himself to thee, as thine; that all that he is and has may be thine.

Meek. Not as he came to Adam, Cain and Mount Sinai, etc.; not to reckon with thee, nor demand payment of a debt; all wrath is laid aside, nothing but meekness and goodness is here. But the evangelist has slightly changed the words of the prophet; for the prophet gives Christ three titles. Poor, Just, Savior, while the evangelist, for the sake of brevity, gives only one, “Meek.” Yet in the Hebrew language the words, poor and meek, have nearly the same meaning, and such a poor man does not mean one who is in need of money or goods, but one who is contrite and lowly in heart.

The word “Just” in the prophet Zecharias, is not to be understood in the sense of strict righteousness, with which God judgeth, but it properly means pious; for when we in German say, this was a pious man, the Scripture says, He was a righteous or just man. That this is the meaning here of the little word “just,” is evident from the other little word in the prophet, “Savior,” or he that saves.

This poor and beggarly king, says Zechariah, will have a different power from all that emperors or kings have had, for he is called “just” and a “Savior.” But no emperor, with all his power, can redeem from the smallest sin.

Thus he retains nothing at all for himself; is satisfied, that in the first place he has God, and is blessed; he serves us therefore only according to the will of his Father, who would have this done by him. Therefore this is not thy good work, that thou givest alms or prayest, but that thou devotest thyself to the good of thy fellowman and servest, and supportest him, where he has need of thee.

He rides not upon a stallion, but upon an ass, which is not a valiant animal, to indicate that he comes not to alarm men, but to help them.

6 And the disciples went, and did as Jesus commanded them, 7 And brought the ass, and the colt, and put on them their clothes, and they set him thereon.

Disciples did as Jesus commanded. The arrangements and the conduct of the disciples towards Christ show that they had no fear or terror, but an entire, friendly confidence in him.

8 And a very great multitude spread their garments in the way; others cut down branches from the trees, and strewed them in the way.

Spread their garments in the way. This also was a divine service, which was due to this King, and indicates that, according to the example of the apostles, we should honor and adorn Christ with our profession and our whole lives.

The nature of the palm tree is, that when a beam is made of it, it yields to no weight, but rises against the burden; therefore palm branches were carried before lords and kings, when they had gained victories and moved in triumphal processions. Also the bearing of olive branches was a sign of submission, especially by those who desired grace and peace, as it was customary among the ancients. So also is the word of this Gospel a word of grace from this King, which brings us peace. Romans 1:16.

9 And the multitudes that went before, and that followed, cried, saying, Hosanna to the Son of David: Blessed is he that cometh in the name of the Lord; Hosanna in the highest.

10 And when he was come into Jerusalem, all the city was moved, saying, Who is this? 11 And the multitude said, This is Jesus the prophet of Nazareth of Galilee.

Who is this? It is, however, a shameful question, when they ask, “Who is this?” as if they did not know him, and as if the temple, the city and everything were not his own. The common people and the little children make them a fine reply, and say, “This is Jesus, the prophet of Galilee.”