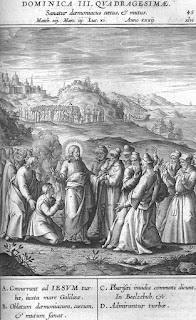 was casting out a demon, and it was mute. So it was, when the demon had gone out, that the mute spoke; and the multitudes marveled. 15 But some of them said, “He casts out demons by Beelzebub, the ruler of the demons.”
16 Others, testing Him, sought from Him a sign from heaven. 17 But He, knowing their thoughts, said to them: “Every kingdom divided against itself is brought to desolation, and a house divided against a house falls. 18 If Satan also is divided against himself, how will his kingdom stand? Because you say I cast out demons by Beelzebub. 19 And if I cast out demons by Beelzebub, by whom do your sons cast them out? Therefore they will be your judges. 20 But if I cast out demons with the finger of God, surely the kingdom of God has come upon you. 21 When a strong man, fully armed, guards his own palace, his goods are in peace. 22 But when a stronger than he comes upon him and overcomes him, he takes from him all his armor in which he trusted, and divides his spoils. 23 He who is not with Me is against Me, and he who does not gather with Me scatters.
24 “When an unclean spirit goes out of a man, he goes through dry places, seeking rest; and finding none, he says, ‘I will return to my house from which I came.’ 25 And when he comes, he finds it swept and put in order. 26 Then he goes and takes with him seven other spirits more wicked than himself, and they enter and dwell there; and the last state of that man is worse than the first.”
27 And it happened, as He spoke these things, that a certain woman from the crowd raised her voice and said to Him, “Blessed is the womb that bore You, and the breasts which nursed You!”
28 But He said, “More than that, blessed are those who hear the word of God and keep it!”

14 And he was casting out a devil, and it was dumb. And it came to pass, when the devil was gone out, the dumb spake; and the people wondered. 15 But some of them said, He casteth out devils through Beelzebub the chief of the devils.

A dumb devil. The man was blind, as Matthew says, dumb, and also deaf, and possessed of a devil, as Luke says here. Therewith the Lord draws us to himself, so that we shall expect every thing good from him.

This dumb, deaf and possessed man represents all the children of Adam, who in their flesh are possessed of the devil by original sin, so that they must be his and do his will.

That our Lord Jesus here casts out a devil is written for our consolation, in order that we may learn and know that he is Lord over the devil and his kingdom; and that this work, then begun in the body, shall not cease, but shall remain in Christendom until the last day. (John 14:12) For such work Christ has left behind him his instruments, holy baptism, the most revered sacrament, the word and absolution, and whatever else belongs to the office of the ministry, in order that thereby he may destroy the kingdom of the devil, rescue the people out of his power, and cast him out from them.

1. The first are the most pious; namely, the people, who wondered when they saw this great work of Christ, and no doubt thanked God for it. These are the little flock, whose eyes are opened and who see the glory and divine power of the word.

2. The second are the Pharisees and Scribes, who are displeased that they can not also do the same, and fear that the people will think higher of him than of themselves. Therefore they say haughtily, It is contrary to God, the devil is in him, it is nothing but deception and devilish speakings, such as the jugglers carry on. Besides, so secure do they feel in this sin and abominable blasphemy, that they give the devil a very despicable name, and call him “Beelzebub”  that is, the king of flies, or a big bumble-bee. Thus they highly despise the devil, as though they were great saints and full of the Holy Ghost, against whom the devil is like a bumble-bee.

16 And others, tempting him, sought of him a sign from heaven.

3. The third kind of hearers are almost as bad as the second, only that they are not so outspoken, behave as if they wished to believe, if they only had such a sign as would please them. These are not lacking in that they do not see the sign; they see it, indeed, but they regard it as an earthly and not a proper sign. Such hearers you can still find at the present day, mostly among the great lords. But he answers them both. Yet for the sake of the pious we must reply to the obdurate and stop their mouths.

17 But he, knowing their thoughts, said unto them, Every kingdom divided against itself is brought to desolation; and a house divided against a house falleth. 18 If Satan also be divided against himself, how shall his kingdom stand? be cause ye say that I cast out devils through Beelzebub.

A kingdom divided against itself. This is a worldly picture which reason can grasp. Hence the Pharisees speak here against their own reason.

Here it might be asked, How does it come, that the exorcists, who are such desperate fellows, can yet often cast out devils? God certainly does not do this, but the devil does it. Answer: St. Paul says. The devil will do signs in the latter times, but they shall be lying signs. (2 Thessalonians 2:9) For he does it not to promote the Gospel, but to lead the people away from the faith and into idolatry.

Again the devil has sometimes pretended to be afraid of consecrated candles, consecrated water, etc., though his design was merely to strengthen superstition among the people, that they might so much less come to a true faith and trust in God’s word and grace.

But now it is necessary to consider well what Christ says; namely, that the devil has a kingdom, a united kingdom, holding together. Therefore whoever attacks one devil attacks them all.

19 And if I by Beelzebub cast out devils, by whom do your sons cast them out? Therefore shall they be your judges.

By whom do your sons cast them out? Christ will say, Since your children do this, it must be from God, but when I do it, you say it is of the devil, “Therefore shall they be your judges;” I appeal to them.

20 But if I with the finger of God cast out devils, no doubt the kingdom of God is come upon you.

The finger of God. St. Matthew 12:18, interprets this finger of God to be the Holy Ghost. From this it follows conclusively, that so long as the Holy Ghost does not come into us, we are not only incompetent to do any thing good, but are necessarily in the devil’s kingdom. But if we are in his kingdom, then we can do nothing else than what pleases the devil. 2 Timothy 2:26.

21 When a strong man armed keepeth his palace, his goods are in peace, 22 But when a stronger than he shall come upon him, and overcome him, he taketh from him all his armor wherein he trusted, and divideth his spoils.

The strong man armed. In the third place he answers with a parable taken from experience. Here again noone can boast that he can by his own strength cast out sin or the devil. And see how he paints the devil; he calls him a strong giant, who protects his court and palace; that is, the devil does not only possess the world as his own kingdom, but also keeps and fortifies it, so that no one can take it from him; he possesses it also “in peace,” unmolested, that it may do as he pleases.

But when the stronger comes. When the Gospel comes. When he must give place to the Gospel, he exerts all his power; but it helps him not. Christ overcomes him, and takes from him his armor, wherein he trusted; that is, he converts some of the persecutors, and thereby weakens him. “He divideth his spoils,” that is, he uses those whom he has converted, and uses them for various offices, graces and works in Christendom. Romans 7:6.

To be with Christ, is to have the same mind and intention with Christ; that is, to believe on Christ, that his works, and not our works, help us.

To gather with Christ, is to do good through the love of Christ.

27 And it came to pass, as he spake these things, a certain woman of the company lifted up her voice, and said unto him, Blessed is the womb that bare thee, and the breasts which thou hast sucked. 28 But he said, Yea, rather, blessed are they that hear the word of God, and keep it.

The good woman speaks from a fleshly and womanly affection; as also still many a mother is found, who, when she hears a learned, pious preacher, on whom all the world gapes, exclaims, Would to God, that my son could also become such a man!

But the Lord says, “Yea, rather, blessed are they that hear the word of God, and keep it;” that is, I care not for fleshly praise, and my mother is not blest on that account. Therefore turn her heart from such useless, vain and profitless thoughts, and learn that they are eternally blest who diligently hear God’s word, and receive it into their heart (Matthew 12:46-50). It is a great grace, (to those who have it) to hear God’s word. For there are many who do not want it, nor wish to hear it. But the very greatest grace is, to keep God’s word.