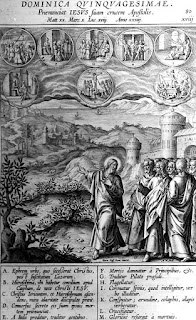 31 Then He took the twelve aside and said to them, “Behold, we are going up to Jerusalem, and all things that are written by the prophets concerning the Son of Man will be accomplished. 32 For He will be delivered to the Gentiles and will be mocked and insulted and spit upon. 33 They will scourge Him and kill Him. And the third day He will rise again.”

34 But they understood none of these things; this saying was hidden from them, and they did not know the things which were spoken.

35 Then it happened, as He was coming near Jericho, that a certain blind man sat by the road begging. 36 And hearing a multitude passing by, he asked what it meant. 37 So they told him that Jesus of Nazareth was passing by. 38 And he cried out, saying, “Jesus, Son of David, have mercy on me!”
39 Then those who went before warned him that he should be quiet; but he cried out all the more, “Son of David, have mercy on me!”
40 So Jesus stood still and commanded him to be brought to Him. And when he had come near, He asked him, 41 saying, “What do you want Me to do for you?”
He said, “Lord, that I may receive my sight.”
42 Then Jesus said to him, “Receive your sight; your faith has made you well.” 43 And immediately he received his sight, and followed Him, glorifying God. And all the people, when they saw it, gave praise to God.

31 Then he took unto him the twelve, and said unto them, Behold, we go up to Jerusalem, and all things that are written by the prophets concerning the Son of man shall be accomplished.

All things written by the prophets shall be accomplished: The Scripture speaks only of Christ, and everything in it concerns Christ; he must fulfill the Scriptures by his death. But if it must be done by his death, then our death contributes nothing to it. Therefore, learn to say: My death avails nothing and I will not regard it as my consolation, I do not depend upon it for the forgiveness of my sins, but I will suffer death for the praise and honor of God, freely and without reward, and for the benefit and service of my neighbor, and in no way will I rely upon this.

But he speaks these words before he has endured his sufferings, in order that afterwards they might be the stronger in faith, when they re membered that he had said these things before, and that he had willingly taken upon himself these sufferings, and was not crucified by the power and craft of his enemies, the Jews. Isaiah 53:7; Luke 24:6.

And this is the right way of under standing the sufferings of Christ, when we recognize not only his suf ferings, but also his heart and willingness to suffer. This gives real con solation, trust and joy in Christ. (Psalm 40:8-9; Hebrews 10:10) As he has willingly given himself for us, so we also should emulate the same example of love.

34 And they understood none of these things: and this saying was hid from them, neither knew they the things which were spoken.

And they understood none of these things. For their heart stood thus: This man performs so many miracles, that we must see and realize that God is with him. Therefore he must become a great lord in due time; for the Scripture says of him, that he shall have a glorious kingdom, above all the kings and lords of the earth, and we, his servants, shall also become princes and great lords. All of God’s works are of this nature; when we speak of them before they are performed, they can not be comprehended; but after they are performed, then we understand and see them. Thus St. John mentions several times, that the disciples of Christ afterward understood what he had told them. Hence the word of God and faith belong together.

35 If And it came to pass, that as he was come nigh unto Jericho, a certain blind man sat by the wayside begging:

The blind beggar. The blind man signifies the spiritually blind; such is every man born of Adam, who neither sees nor perceives the kingdom of God; but this is a grace, that he feels and realizes his blindness and desires to be relieved of it.

Jesus of Nazareth passeth by. In the first place, he hears it said that Christ was passing by; he had also previously heard, that Jesus of Nazareth was a kind man, who helps every one that calls upon him. His faith had grown from such hearing. In the second place, he firmly believes, and doubts not, that what he heard of him is true.

Jesus, have mercy on me. In the third place, according to his faith, he cries also and prays, as St. Paul also describes this order. Romans 10:13-14.

In the fourth place, he also openly confesses Christ, without the fear of man.

That he should hold his peace. In the fifth place, he struggles not only with his conscience, which no doubt, hath told him that he was not worthy of this mercy, but also with those who threatened him and told him to be still, who thereby wished to alarm his conscience and discourage him; where faith begins, there struggle and contest also begin.

In the sixth place, he remains firm, perseveres and wins. Hereby the Evangelist teaches us a good beggar’s art, that we should learn to beg of God, and not be afraid or ashamed, but persevere. Vs. 1-8.

40 And Jesus stood, and commanded him to be brought unto him: and when he was come near, he asked him, 41 Saying, What wilt thou that I shall do unto thee? And he said, Lord, that I may receive my sight. 42 And Jesus said unto him, Receive thy sight: thy faith hath saved thee. 43 And immediately he received his sight, and followed him, glorifying God: and all the people when they saw it, gave praise unto God.

What wilt thou that I shall do unto thee? As if he would say, Ask what you please, it shall be granted. The blind man does not hesitate long, but says, “Lord, that I may receive my sight.” The Lord replied, “Yes, thou shalt see.” This means, ask shamelessly, but receive graciously. Thus it will be to all who hold fast to the word of God, close their eyes and ears against the devil, the world and themselves, act as though they and God were alone in heaven and on earth.

Thy faith hath saved thee. Christ relinquishes the honor of the miracles, and bestows it on the faith of the blind man.

Glorified God. In the eighth place, he brings the right sacrifice of praise, which is well pleasing to God. Psalm 50:23.

The people praise God. In the ninth place, he causes many others also to praise God in him.