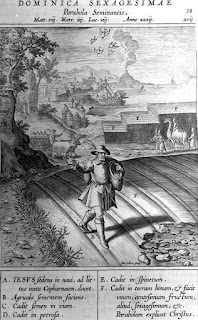 4 And when a great multitude had gathered, and they had come to Him from every city, He spoke by a parable: 5 “A sower went out to sow his seed. And as he sowed, some fell by the wayside; and it was trampled down, and the birds of the air devoured it. 6 Some fell on rock; and as soon as it sprang up, it withered away because it lacked moisture. 7 And some fell among thorns, and the thorns sprang up with it and choked it. 8 But others fell on good ground, sprang up, and yielded a crop a hundredfold.” When He had said these things He cried, “He who has ears to hear, let him hear!”
9 Then His disciples asked Him, saying, “What does this parable mean?”
10 And He said, “To you it has been given to know the mysteries of the kingdom of God, but to the rest it is given in parables, that
‘Seeing they may not see,
And hearing they may not understand.’
11 “Now the parable is this: The seed is the word of God. 12 Those by the wayside are the ones who hear; then the devil comes and takes away the word out of their hearts, lest they should believe and be saved. 13 But the ones on the rock are those who, when they hear, receive the word with joy; and these have no root, who believe for a while and in time of temptation fall away. 14 Now the ones that fell among thorns are those who, when they have heard, go out and are choked with cares, riches, and pleasures of life, and bring no fruit to maturity. 15 But the ones that fell on the good ground are those who, having heard the word with a noble and good heart, keep it and bear fruit with patience.

For though there are many who see and hear it, yet they do not understand it. As there are many now who preach and hear Christ, how he was given for us; but this is all yet upon the tongue and not in the heart; for they themselves do not believe it, nor feel it, as Paul says, (1 Corinthians 2:14) “The natural man receiveth not the things of the Spirit of God; for they are foolishness unto him; neither can he know them, because they are spiritually discerned.” Therefore it is and remains a mystery to them; and all that they hear is to them as when one hears an enigma or dark saying.

4 And when he sowed, some seeds fell by the way side, and the fowls came and devoured them up:

Seed by the way side. (See verse 19.) These are they who hear the word and neither understand nor regard it; and these are not the mean people in the world, but the greatest, wisest and holiest, and in short, it is the great majority. For he speaks not here of those who persecute the word, or do not hear it, but of those who hear it and are disciples.

This power of the devil indicates not only this, that the hearts, hard ened by a worldly disposition and life, lose and forsake the word; but also, that instead of God’s word, the devil sends false teachers, who tread it down with the doctrines of men; for by “the birds” Christ himself designates the devils, who take away and devour the word, (See 2 Timothy 4:4.) By the “treading down of men” he understands the teachings of men, which rule in our hearts (2 Thessalonians 2:11f.) and to this category belong all heretics, plotters and fanatics, who understand the Gospel in a fleshly sense, and interpret it accordingto their own meaning.

We may think there is no danger in hearing God’s word, and yet not receiving it, and that those who do this are careless people, and that it is quite natural that they hear the sermon and forget it; — but Christ judges differently here, and says, The devil taketh the word out of their heart.

The other two classes are not quite so bad; but they are weak, make a little effort, perceive something, are also satisfied with it; therefore the Lord does not give them over to the devil so entirely as the first ones.

5 Some fell upon stony places, where they had not much earth: and forthwith they sprung up, because they had no deepness of earth

Stony places. (See verse 20. ) This is also a great multitude, who rightly understand the word, and comprehend it correctly; they rejoice also, that they can perceive the real truth, and know how we can be saved by faith without works, etc. But when it comes to the point, that they shall endure shame, danger, loss in body or goods, on account of it, they fall away and deny it, or conceal the word and the deed.

7 And some fell among thorns; and the thorns sprung up, and choked them:

Among thorns. (See verse 22.) Their misfortune is, that they enjoy peace and good times; therefore they do not take earnest heed to the word, become indolent, and involve themselves in the cares, riches and luxuries of this life, and are thus be come useless. Their heart clings to earthly goods.

8 But other fell into good ground, and brought forth fruit, some an hundredfold, some sixty fold, some thirtyfold.

Good ground. (See verse 23.) Although the works are also called fruits, yet here he speaks especially of the fruits which the word brings into the hearts, that by this means many people are converted, believing, illuminated, comforted and wise in Christ. (Romans 1:13; Colossians 1:6.) After this fruit follow the fruits of the spirit, such as faith, works, charity, etc.

As the external offices are dissimilar, so also the fruits are unlike. A preacher serves the church more than a mechanic, and yet both are Christians.

But it requires a fine and good heart for this (one that is free from thorns, has good ground and is fruitful,) that is, a heart which, in the first place, is not careless, but very earnest in the word of God. In the second place, the heart must be sure and steadfast, not soft and cowardly. Thirdly, it must also be cleansed and swept; that is, we must not permit ourselves to love goods, money, honor and pleasure more than the word of God and the life to come.

In patience. Because there will always be a cross, temptations, adversity and offenses.

9 Who hath ears to hear, let him hear.

Who hath ears. He does not wish you to postpone it to a future time. Now, says he, while thou hearest it, receive it, otherwise it will not be well with thee.

11 He answered and said unto them, Because it is given unto you to know the mysteries of the kingdom of heaven, but to them it is not given.

It is given to you. That is, the Spirit imparts it to you, that you may not only see and hear, but also un derstand and believe in your heart; therefore it is now no longer a mystery to you. But, Christ means to say, this people is so deplorably proud and evil that even where I speak and work freely they not only will not hear and learn, but also revile and blaspheme the known truth (see Matthew 12:24.) Therefore I do to them as they will have it; that, as they will not receive the clear and plain word, they must hear parables, which, though they desired to, they cannot understand. (See 2 Corinthians 4:3; 3:14.) Therefore Christ is not to blame, as though he were jealous or unwilling, but the wickedness of the people is to blame.

Whosoever hath. This “hath,” namely, to love the word, is much already and a great blessing, even when one does not yet understand everything perfectly. For this is already a beginning, when we know what the words mean. To the word the thing is also added (Luke i1:53) for where the word is understood, there it grows and reforms men; but where it is not understood, there it declines and offends men.

13 Therefore speak I to them in parables: because they seeing see not; and hearing they hear not, neither do they understand.
14 And in them is fulfilled the prophecy of Esaias, which saith, By hearing ye shall hear, and shall not understand; and seeing ye shall see, and shall not perceive:

Seeing, see not. That is, they will not and care not to understand it, but they imagine that they under stand much higher and greater things. Therefore the higher they boast of their understanding, the deeper and lower do I descend with my words, in order that the high-minded may snap at vain things, but the humble may find me. And I do this for this reason, that they may be humiliated and come down from the height of their understanding to the lowliness of learners; that is, that they may abandon the presumption that they understand all things, and humble themselves and learn of me. But they will not do this; therefore they remain as they are; namely, with hearing ears they hear not, etc.

Heart is waxed gross. This proceeds from an obdurate and clogged heart; namely, that the heart for a long time has directed its desires towards something else, and has by a long habit become accustomed to think of other things and have other inclinatipns.

The words “that I should heal them” seem to be spoken out of jealousy, as if he did not wish that they should see. But according to the connection it means, Therefore, because they will not see, they can not be helped.

Paul also complains, (Romans 16:18) that the hearts of the simple are deceived, and it grieves him that the Galatians, who ran well for a time, did not obey the truth (Galatians 5:7.) For the heretics capture not Epicurean worldlings, not the thorns, not the avaricious, but the most select people, and those who have the best conscience, who seek the truth with all earnestness; this is certainly very painful. Therefore he lays this parable before the pious for their consolation in order that they may not fear that all hope for the faith and the church is lost, but that they may think it must be so, because it had been foretold.

They must be men of spiritual discernment, who can detect those tares; for the parable speaks of those who, professing the Christian doctrine and faith, live unchristian lives, glistening finely whilst they are pernicious.

At the same time this parable gives us to understand, that the free will is nothing, because the good seed is sown only by Christ, and the devil can sow only bad seed, as we see also that the ground of itself bears nothing but tares.