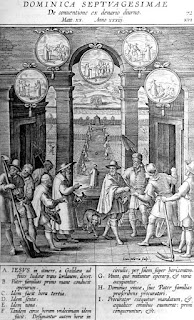 8 “So when evening had come, the owner of the vineyard said to his steward, ‘Call the laborers and give them their wages, beginning with the last to the first.’ 9 And when those came who were hired about the eleventh hour, they each received a denarius. 10 But when the first came, they supposed that they would receive more; and they likewise received each a denarius. 11 And when they had received it, they complained against the landowner, 12 saying, ‘These last men have worked only one hour, and you made them equal to us who have borne the burden and the heat of the day.’ 13 But he answered one of them and said, ‘Friend, I am doing you no wrong. Did you not agree with me for a denarius? 14 Take what is yours and go your way. I wish to give to this last man the same as to you. 15 Is it not lawful for me to do what I wish with my own things? Or is your eye evil because I am good?’ 16 So the last will be first, and the first last. For many are called, but few chosen.”

This parable was interpreted by the fathers, and especially Gregory, to mean, that the first who were sent into the vineyard were Adam and Adam’s children until the time of the flood; but the second were those from Noah to Abraham; the third, those from Abraham to Moses and Aaron; the fourth, those from Moses to Christ; the fifth, who were only one hour in the vineyard, were those who came shortly before the time of Christ, and who were saved together with the others. Such prating is good enough to pass away the time, when one has nothing else to preach. But we must follow the Scriptures, which everywhere in the prophets here and there call the Jewish people a vineyard, as in Isaiah 5 and others. Compare also Matthew 21:33-45; John 15:5.

8 So when even was come, the lord of the vineyard saith unto his steward, Call the laborers, and give them their hire, beginning from the last unto the first. 9 And when they came that were hired about the eleventh hour, they received every man a penny.

Received every man a penny. The sum and substance of the teaching of this parable is, that we should learn therefrom that God does not deal with us according to our desert, but gives to each one equally out of grace, the promised penny, whether he has labored much or little; namely, his Son Jesus Christ, the forgiveness of sins, deliverance from death and all grief of heart; in addition, he gives us also his Holy Spirit, and finally he gives us eternal life.

Now, if God wishes to give you something extra for the labor which you have performed more than some other one, he will know very well how to reward you. But the promised penny, Christ and the forgiveness of sins, we shall receive all alike.

By this parable, therefore, the Lord wishes to separate his kingdom from the kingdom of this world, and teaches us that there is a great difference between his kingdom and the kingdom of this world, where every thing cannot be alike, because the persons are unlike. Therefore this is the principal thing in this Gospel, that we shall draw this consolation from it, that we Christians are all equal in Christ. He who has and knows this consolation, goes to his work with joy, unconcerned whether in this brief time on earth he stands in a lower or higher position than any other one.

10 But when the first came, they supposed that they should have received more; and they likewise received every man a penny.
11 And when they had received it, they murmured against the goodman of the house,
12 Saying, These last have wrought but one hour, and thou hast made them equal unto us, which have borne the burden and heat of the day.

Murmured against the goodman. Thus they received equally a penny; that is, to each party was given temporal good; yet the latter did not seek temporal good, but it was be stowed upon them, because they sought first the kingdom of God. (Matthew 6:33.) And with this they also received the grace of the kingdom of God and are joyful. But the former seek the temporal, hire them selves and serve for the temporal, and thereby they must miss the grace and with a hard life also merit perdition. For these, the latter, do not expect or presume to merit the penny, and yet receive all. But when the former see this, they presume to receive much more and miss all. Therefore we see clearly, when we look to their heart, that the latter do not regard their merit, but enjoy the goodness of God. The former do not regard the grace of God, but look to their merits and think they are entitled to it and murmur.

Our flesh and blood have a natural jealousy of heart. The natural heart wants to be rewarded for its work and honorable conduct in Christendom, or says it will do nothing, has an evil eye and looks sour when it sees that another one, who has been in Christendom only a year or six months shall have an equal part in Christ and eternal life, with the one who for a whole lifetime has had trouble and toil.

Might not the angels also have an evil eye and murmur, because the divine Majesty, the Son of God, did not become an angel, which creature is so much higher and better than man, but descended into our slime and filth, who are by nature and manner God’s enemies? But the dear angels are so pious, that they are heartily pleased with what God does; fall down at his feet and worship him, who became a man; and sing the joyful Christmas hymn.

Should we therefore not be ashamed, we poor mudsacks, (Schlammsaecke) who so soon exalt ourselves, when we know that we have done a little more than another one?

13 But he answered one of them, and said, Friend, I do thee no wrong: didst not thou agree with we for a penny ? 14 Take that thine is, and go thy way: I will give unto this last, even as unto thee. 15 Is it not lawful for me to do what I will with mine own ? Is thine eye evil, because I am good ?

I do thee no harm. Why do you murmur when I give you that which is yours? Shall I not do with mine own what I please? Thus Christ alarms those who presume to fight by their works against heaven. All these labor for a fixed reward; that is, they accept God’s law not otherwise, than that they for a certain reward fulfill the law by works, yet never rightly understand the law, neither do they know that salvation must be entirely of pure grace from God. This means, that they hire themselves to the Lord, and agree with him for a penny a day (v. 2) therefore their life becomes unpleasant and they have a hard time (v. 12). Then when the Gospel comes and makeseverything equal (Romans 3:23) and when it becomes manifest that none can be justified before God by works, they turn about and despise those who have done nothing at all. Then they lose the favor of God, and must accept their temporal reward and be condemned.

16 So the last shall be first, and the first last: for many be called, but few chosen.

The last shall be first. Those who are the first before men, that is, who regard themselves and permit themselves to be regarded as nearest to and first before God, will be disappointed in finding themselves the last before him, and the reverse will also be true in regard to those who are last. This sharp, high and excellent judg ment, “The first shall be last,” strikes one’s own spiritual presumption in the heart the deepest. We must not look upon this parable in all its parts, as on that in Luke 16:1 ff., or inquire what a penny means, or what hour is meant; but we must consider the main point; namely, what the householder means and intends, that he wishes to have his goods considered higher, exclusively higher, than all works and merits.

Many called . . . few chosen. Over curious heads draw many absurd and ungodly thoughts from this passage, and explain the words thus: “Many are called,” etc. That is, God offers his grace to many, but “few are chosen,” which means, but he bestows his grace upon few. These imagine, when God has chosen anyone he will be saved without means. But he who has not been called, may do what he will, he may be as pious and believing as he will, yet it is still so ordered by God, that he must fall and cannot be saved. But let him, who would know God and do his will, go the right way, then he will not be offended, but bettered. But the right way is the Lord Christ. But how does it go? As we are afterwards told in the Gospel, “Few are chosen” that is, few conduct themseles so according to the Gospel, that God is pleased with them.