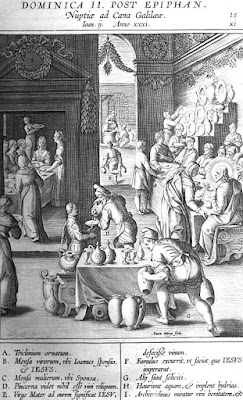 2 On the third day there was a wedding in Cana of Galilee, and the mother of Jesus was there. 2 Now both Jesus and His disciples were invited to the wedding. 3 And when they ran out of wine, the mother of Jesus said to Him, “They have no wine.”4 Jesus said to her, “Woman, what does your concern have to do with Me? My hour has not yet come.”5 His mother said to the servants, “Whatever He says to you, do it.”

6 Now there were set there six waterpots of stone, according to the manner of purification of the Jews, containing twenty or thirty gallons apiece. 7 Jesus said to them, “Fill the waterpots with water.” And they filled them up to the brim. 8 And He said to them, “Draw some out now, and take it to the master of the feast.” And they took it. 9 When the master of the feast had tasted the water that was made wine, and did not know where it came from (but the servants who had drawn the water knew), the master of the feast called the bridegroom. 10 And he said to him, “Every man at the beginning sets out the good wine, and when the guests have well drunk, then the inferior. You have kept the good wine until now!”

11 This beginning of signs Jesus did in Cana of Galilee, and manifested His glory; and His disciples believed in Him.

1 And the third day there was a marriage in Cana of Galilee; and the mother of Jesus was there:

The marriage at Cana. It is reasonable to think that the groom and bride must have been closely related to the holy mother Mary, and were near and good friends, because she is there herself and helps in the management.

2 And both Jesus was called, and his disciples, to the marriage.

Jesus called to the marriage. It is honorable to the matrimonial state, that Christ himself goes to the marriage with his mother and his disciples, and in addition becomes the chief cup-bearer to the bride. Since Christ honors and encourages marriage, it follows that every one should regard it favorably and commendable, and let the heart be cheerful, because it is certain that God loves this state, and we should cheerfully endure what ever may be hard to bear therein.

3 And when they wanted wine, the mother of Jesus saith unto him, They have no wine,

They wanted wine. Here you see that marriage is also such a state, which requires faith in God, urges and exercises love to the neighbor, in many kinds of trouble, labor, adversities, crosses and all kinds of trials, as is the case in all that pertains to God’s word and work.

Mary thinks, He is so good and gracious, that it needs no petition; I will only inform him what is wanting, and he himself will do more than we can ask. Such is the disposition of faith.

4 Jesus saith unto her, Woman, what have I to do with thee? mine hour is not yet come.

Woman, what have I to do with thee? I But see how unkindly he dismisses the humble suggestion of his mother, who had said this to him with so much confidence. He says to her: “Woman, what have I to do with thee?” What concern is this to me or thee? Here you see how faith is constituted; what has it now presented to it? Purely nothing and darkness; here it feels the want and sees no help anywhere; in addition, God also acts strangely towards it and recognizes it not, so that nothing at all remains.

But mark also herein, how Christ confirms what Moses says, (Deuteronomy 33:9) For, although there is no greater authority on earth, than the authority of father and mother, yet it is all at an end when it concerns I God’s word and work.

Mine hour is not yet come. Herein the manner of God’s divine grace shows itself, that it can be imparted to no one who has sufficient already and does not yet feel his need.

5 His mother saith unto the servants, Whatsoever he saith unto you, do it.

Whatsoever he saith, do. Mary shows by her words that she has overcome the rebuff, and expects from him nothing else than pure goodness. Sensitiveness must be killed and the old man perish, in order that pure faith in God’s goodness and no sensitiveness remain in us.

6 And there were set there six waterpots of stone, after the manner of the purifying of the Jews, containing two or three firkins apiece. 7 Jesus saith unto them, Fill the waterpots with water. And they filled them up to the brim.

Filled them up to the brim. Christ shows herewith that marriage was instituted by God, and the Lord favors it; so that what is needed in matrimony he will supply; he supplies wine, when it is wanting, and makes the same out of water. As if he would say, Must ye drink water? that is, suffer tribulation, according to the outward state, and does it seem hard to you? Very well; I will make it sweet for you, and change the water into wine, so that your tribulation may become joy and pleasure. I will not do it in this manner, so as to take the water away or pour it out; it shall remain; yea, I will first command that it shall be poured out and make the vessels full to the brim.

8 And he saith unto them, Draw out now, and bear unto the governor of the feast. And they bare it. 9 When the ruler of the feast had tasted the water that was made wine, and knew not whence it was: (but the servants which drew the water knew) the governor of the feast called the bridegroom, 10 And saith unto him, Every man at the beginning doth set forth good wine; and when men have well drunk, then that which is worse: but thou hast kept the good wine until now.

Christ ever ready to help. Christ honors marriage by his own personal presence, with miracles and presents, all for the benefit of the betrothed and the guests. This is the manner of love and its works, by which Christ draws all hearts to himself, so that they trust him who is ready to help every one also in temporal goods.

Thus our dear Lord Christ even to this day turns the water into wine, in my house and in your house, (if we are godly and pious, and leave the care to him.)

Again, he causes one piece of bread to be multiplied into ten, and one coat to last as long as three, in order that, on account of such experience, if we will only open our eye’s, we shall say: Lord, the work of house keeping belongs to thee; we serve thee therein; for thou hast honored and dost still honor it with thy blessing. Therefore I also will not despise it, but diligently promote it in my station.

Thou hast kept the good wine until now. Here you see that faith is not disappointed, and God does not for sake it, but gives more abundantly than we can ask. Christ also gives us to understand here that he is not displeased with the sumptuousness of the wedding, nor with anything pertaining to the wedding as to adornment and rejoicing, eating and drinking, as the usages of the country required.

11 This beginning of miracles did Jesus in Cana of Galilee, and manifested forth his glory; and his disciples believed on him.

Manifested his glory. He performs this first miracle at the marriage of Cana of Galilee, the poor, little village, that we may form correct ideas of wedlock, and not avoid and hate it as the pope does. Therein he has manifested his glory to his disciples, that they might learn to know him by these signs and wonders, and regard him as the Son of God and the true Messiah.