I love a good mystery. Whether it’s Sherlock Holmes or Hercule Poirot, it’s fun to track with the detective as he discovers the clues and uses his “little grey cells” and eventually comes to the solution of the mystery. What had long been hidden now is revealed, and we the readers finally know “whodunit.” I love a good mystery.

And tonight, on Epiphany, we have one. A good mystery, I mean. A very good mystery, full of good news for you and me. What was long hidden has now been revealed. It was there all along, the clues were there, but most people missed it. It was hidden in plain sight, so to speak. But now on Epiphany that mystery has been made known. We know “who done it” and what he has done. And so our theme tonight: “Epiphany: Mystery Made Known.”

Our text is the Epistle for this Epiphany festival, from Ephesians chapter 3. There St. Paul explains what this mystery is that was so long hidden but now has been revealed. And if we had to sum it up in one verse, I would pick verse 6, as follows: “This mystery is that the Gentiles are fellow heirs, members of the same body, and partakers of the promise in Christ Jesus through the gospel.”

So this is what was not made known in previous generations, Paul says, but now has been made known in Christ. And it is that the Gentiles are to be included among God’s people, that they too get to take part in the promises of Christ.

I guess we should explain what is meant by this term “Gentiles.” Biblically speaking, the Gentiles are all those who were not part of God’s people Israel. The Israelites, the Jews, were those descended from the patriarchs Abraham, Isaac, and Jacob. And then everybody else in the world would be the Gentiles, the nations, the goyim. These were peoples who did not know the true God, the God of Abraham, Isaac, and Jacob. They worshiped other gods, false gods, idols of wood and stone, the creation of man’s imagination, powerless gods, unable to help. And so the Gentiles were without hope and without God in the world.

And guess what? That would include most all of our ancestors, I’m guessing. I don’t think many of us here are descended from the people of Israel. Instead, our ancestors were off in strange lands, worshiping strange gods, like Thor or Odin, bowing down to sacred oak trees or worshiping the sun and the stars. That’s pretty lost, groping around in the dark, knowing that there must be a god or gods up there somewhere, but not knowing how to access the gods or appease them. That is a lost and hopeless state. But that’s where we would be, if the long-hidden mystery had not been made known.

And that’s what Epiphany is about: the making known of that mystery, namely, that even the Gentiles–those lost souls out there–that even the Gentiles get in on the action. God cares even for the heathen Gentiles, and he has made a way for them–for us–to be included in his family. 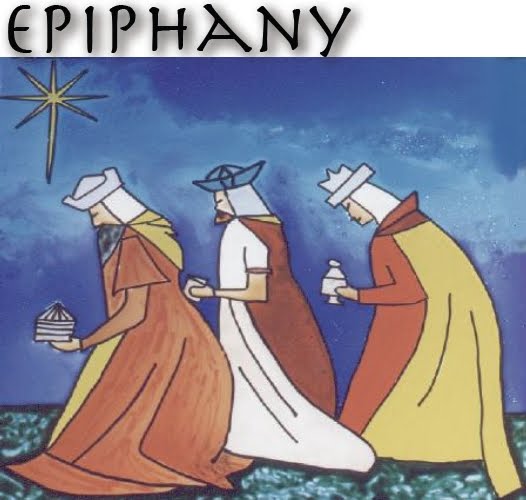 We see that exemplified in the story of the wise men. The wise men, the magi, were Gentiles from a faraway land to the east. Probably Babylon, where thousands of Jews had been taken captive centuries earlier, people like Daniel that we read about in the Old Testament. And that’s likely how the wise men, these court scholars, had heard prophecies about a great king to come in Israel, that there was going to be a Messiah someday, and that his coming would be associated with the rising of a special star. So when they see such a star, they head off for Israel, they come to Jerusalem, and they inquire where this Messiah is supposed to be born. “Where is he who is to be born king of the Jews?” They find out, they find the child, and they rejoice exceedingly with a great joy when they do find him. For this Jewish Messiah, this little child who has been born, is going to be the Savior also of the Gentiles.

This then is the mystery that is made known at Epiphany. Gentiles also get included in God’s plan. We are not left out in the cold. Can you comprehend how great and marvelous a thing this is? Think of it. Otherwise, we would be clueless about God. He would still be hidden from us, unknown and unknowable. But now we know who God is, the one true God. We know how he loves us. We know what he has done for us, to bring us in, to include us in his family. Now we know who we are, and we know where we’re going. All of this mystery, this hidden stuff, now has been made known to us. Instead of groping around in the dark, now we walk in the light. As Isaiah says, “Arise, shine, for your light has come, and the glory of the LORD has risen upon you. For behold, darkness shall cover the earth, and thick darkness the peoples; but the LORD will arise upon you, and his glory will be seen upon you. And nations shall come to your light, and kings to the brightness of your rising.”

This mystery was hidden in ages past. The Gentiles didn’t know it. Indeed, even the Israelites didn’t know it, although it was there all along, hidden in plain sight. It was right there in the Scriptures all along. We just read the prophecy of Isaiah, that the nations, the Gentiles, would come to the light shining out of Israel. But even before that, long before that, God had promised that salvation would be for the Gentiles also. Think of the Lord’s covenant with Abraham, that in Abraham’s seed all the families of the earth would be blessed. And Jesus is that seed of Abraham, through whom the blessing comes to the nations. And such promises of salvation for the Gentiles–those promises are all over the place in the Old Testament, but many were not seeing them, not recognizing them. So the mystery was hidden in plain sight.

We call a mystery a “whodunit.” We want to find out, “Who did the deed?” And so we ask about this mystery, “Who done it? And what has he done?” Answer: God has done it, and here is what he has done. God has sent his own Son into the world to be our Savior. And what makes it a mystery is that this happened in the lowliest and most unlikely way. The Savior of the world is born, not in a king’s palace, not in Rome, or even in Jerusalem, but rather in little Bethlehem, out of the way. A lowly king, on a holy mission: the rescue of sinful mankind. A servant-king, his glory hidden in humility. The mystery of this Messiah, coming like this. That a poor Galilean rabbi–that this is the eternal Son of God in the flesh–this is a mystery to us. That this man rejected by the leaders and crucified as a criminal, in shame–that this is the Savior of the world, dying for all of our sins and winning our forgiveness–this is a mystery to our pride. That a man, dead and buried, could rise again from the dead, and that by faith in him, we will share in his resurrection–another mystery that mere reason cannot comprehend.

Indeed, all the saving truths of the gospel are mysteries, things hidden from man’s reason. That Holy Baptism unites us with Christ and washes away our sins–this is a mystery, hidden from observation, but revealed to faith. That the bread and wine in Holy Communion are Christ’s body and blood, for our forgiveness–likewise, a mystery, hidden from our eyes, but declared to be so by Christ’s own words. So all these saving works of God are mysteries, hidden from reason and observation. But they are, thank God, revealed in the gospel. And the Holy Spirit works through that gospel to create and strengthen saving faith in our hearts.

We come back to the mystery that we’re focused on at Epiphany, namely, the inclusion of the Gentiles in the people and the plan of God. “This mystery is that the Gentiles are fellow heirs, members of the same body, and partakers of the promise in Christ Jesus through the gospel.” You see, all these mysteries are made known through the gospel. That’s why the ministry of the gospel is so crucial. That’s what St. Paul was chosen to do, to be the apostle to the Gentiles, to shine the light of Christ into darkened places, to illumine sin-darkened hearts and minds. Paul traveled everywhere, taking the gospel of Christ to the world, to proclaim it to all people. And that same gospel ministry has been entrusted to the church in all ages, to make known what God has done in Christ to save sinners everywhere. To bring all nations into God’s family, his forever family, the church. Through the means of grace, through the ministry of the gospel, Word and Sacrament, the light shines in the darkness, and the darkness has not overcome it.

Yes, I love a good mystery. And this is a good one indeed. It’s the best kind of mystery, the best “whodunit,” for it tells us what God has done to accomplish our salvation. And it tells us who he’s done it for. Even for the Gentiles, for people like us, God has made known the mystery of Christ.