The messenger of the covenant–he certainly is prominent in our text. But there’s a messenger who comes before him, and he’s mentioned too–that’s the messenger who will prepare the way before the Lord. So that makes two messengers.

But then there’s the prophet Malachi himself, and you could count him as a messenger also, which would make three. Let me explain. You see, the name “Malachi” is a Hebrew name, and it literally means “my messenger.” And in this case, the Old Testament prophet Malachi did serve as the Lord’s messenger. So his name, Malachi, fit his ministry, which was to be a prophet or messenger for the Lord. The prophet Malachi lived about 400 years before Christ, and he is very likely the last prophet to have a book bearing his name included in the Old Testament. After him would come about 400 years of silence from God, before we have John the Baptist and Jesus come along.

But Malachi tells us about their coming, and they–John the Baptist and Jesus–they are the two messengers Malachi prophesies in our text. Listen again: “Behold, I send my messenger, and he will prepare the way before me. And the Lord whom you seek will suddenly come to his temple; and the messenger of the covenant in whom you delight, behold, he is coming, says the LORD of hosts.”

For the angel Gabriel came to John’s father, Zechariah, and told him he would have this son John, who would go before the Lord, to make ready for the Lord a people prepared. And thus at John’s birth, Zechariah sang out his song of praise that we call the Benedictus, in which he spoke prophetically to his infant son John: “And you, child, will be called the prophet of the Most High; for you will go before the Lord to prepare his ways.”

And Jesus himself identified John the Baptist with the prophecy of Malachi, when he said of John, “This is he of whom it is written, ‘Behold, I send my messenger before your face, who will prepare your way before you.’”

So there’s no question John the Baptist is the one being described in Malachi as “my messenger,” who will “prepare the way before me,” says the Lord. And that’s what John did, preparing the way of the Lord in the wilderness, preaching a baptism of repentance for the forgiveness of sins.

Alright, so now we’ve got Malachi himself as the messenger telling us about two messengers to come. And we’ve identified John the Baptist as the messenger preparing the way for the Lord. But that still leaves “the messenger of the covenant,” and he’s the most important one.

But is this good news or bad news? Is it a good or bad thing that the messenger of the covenant is coming? Malachi says that Israel is “seeking” this one, and that Israel “delights” in the idea of his coming. But maybe they don’t know that his coming will not be all sweetness and light. No, his coming will include purifying and judgment, and this will not be so pleasant. 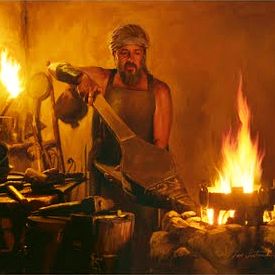 Take the purifying. Malachi says: “But who can endure the day of his coming, and who can stand when he appears? For he is like a refiner’s fire and like fullers’ soap. He will sit as a refiner and purifier of silver, and he will purify the sons of Levi and refine them like gold and silver.” To be put into a refiner’s fire is not pleasant at the time for the gold or the silver. The fire gets pretty hot.

But the refining is necessary in order to purify the metal, to make it pure and strong and at its best. There’s a good outcome that the refiner’s fire produces. And Malachi tells us this. He says of the messenger of the covenant: “He will sit as a refiner and purifier of silver, and he will purify the sons of Levi and refine them like gold and silver, and they will bring offerings in righteousness to the LORD. Then the offering of Judah and Jerusalem will be pleasing to the LORD as in the days of old and as in former years.”

Friends, the Lord Jesus is the messenger of the covenant, and he would have us, his people, be purified. The Lord will refine us, so that our dross is burned away and our faith is strengthened. Our Christian life will have that tested quality that comes from being in the refiner’s fire. These tests can come in the form of various afflictions, testings and trials, which are not very pleasant at the time. But the outcome is good. They make us stronger Christians.

What are you enduring right now? What are those fiery trials, which the Lord is using to purify you, to make you stronger and firmer in your faith? What is the dross that the Lord would burn away? What are the impurities in your life that need to be refined away? Do not despair. Trust in the Lord. Our Lord Jesus Christ, the messenger of the covenant, will only do what is best for you, even if it may not feel that way at the time.

Make no mistake, Jesus is coming again. And he will come in judgment. “From thence he will come to judge the living and the dead,” as we say in the Creed. And men’s sins and misdeeds will be held against them, in strictest account. This will be the judgment of God’s Law, which judges men’s thoughts, words, and deeds, both what we actively do wrong and what we fail to do right. It’s our faithless deeds and words. It’s our failing to show mercy to those in need. All of that is sin, and it all comes under judgment. And that judgment will be swift and severe. Death and eternal damnation to all who do not fear, love, and trust in God above all things.

How will you stand? How will you stand in the Day of Judgment, when the messenger of the covenant comes? He could point out all the ways you have broken that covenant, the Law of the Lord, which demands perfection and requires punishment for those who have broken it. How will you stand? I can tell you this. It won’t be on the basis of my own righteousness. That will not nearly be enough. On my own, I’m toast. And so are you.

But friends, there is still hope. As the Lord says through Malachi: “For I the LORD do not change; therefore you, O children of Jacob, are not consumed.” You see, here’s what does not change, and that is the Lord’s mercy. It’s his covenant of grace and mercy on which we can stand. We can count on his word, that he is gracious and merciful, slow to anger, and abounding in steadfast love. It’s this covenant love, this covenant promise, which assures us we will not be consumed in the fire of judgment. It’s the Lord’s covenant made with the fathers, with Abraham and Isaac and Jacob, which promises us mercy and salvation for the sake of Christ.

Zechariah sings of this covenant, and the messenger of the covenant, through whom we are saved: “Blessed be the Lord God of Israel, for he has visited and redeemed his people and has raised up a horn of salvation for us in the house of his servant David, as he spoke by the mouth of his holy prophets from of old, that we should be saved from our enemies and from the hand of all who hate us; to show the mercy promised to our fathers and to remember his holy covenant, the oath that he swore to our father Abraham, to grant us that we, being delivered from the hand of our enemies, might serve him without fear, in holiness and righteousness before him all our days.”

Malachi prophesied it. Zechariah sang of it. John the Baptist prepared the way for it. And Jesus delivered it. The covenant by which we are saved. Christ is the messenger of this covenant and the Messiah who fulfills it. It is the new covenant, sealed with Christ’s blood, which he poured out for us for the forgiveness of our sins. The new covenant, in which God remembers our sins no more. The new covenant, in which the Lord will write his law on our hearts and give us a new heart, to know and do his will.

Brothers and sisters, we are the people of the new covenant, Christ’s people, those who are trusting in him alone for our salvation. Christ our Savior will not destroy us. He will purify us, but he will not destroy us. And when he comes again, it will not be to condemn us or consume us. Rather, it will be to save us, for eternity, to give us a home forever with him and with all the saints in glory. This is the covenant, the new covenant, of which he is the messenger.