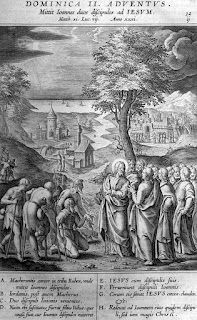 And when John had heard in prison about the works of Christ, he sent two of his disciples 3 and said to Him, “Are You the Coming One, or do we look for another?” 4 Jesus answered and said to them, “Go and tell John the things which you hear and see: 5 The blind see and the lame walk; the lepers are cleansed and the deaf hear; the dead are raised up and the poor have the gospel preached to them. 6 And blessed is he who is not offended because of Me.” 7 As they departed, Jesus began to say to the multitudes concerning John: “What did you go out into the wilderness to see? A reed shaken by the wind? 8 But what did you go out to see? A man clothed in soft garments? Indeed, those who wear soft clothing are in kings’ houses. 9 But what did you go out to see? A prophet? Yes, I say to you, and more than a prophet. 10 For this is he of whom it is written:

‘Behold, I send My messenger before Your face,
Who will prepare Your way before You.’

2 Now when John had heard in the prison the works of Christ, he sent two of his disciples, 3 And said unto him, Art thou he that should come, or do we look for another?

John sent two of his disciples, It is certain that John sent to inquire on account of his disciples; for they did not yet regard Christ as the one for whom he was to be regarded; they waited for one who would move along pompously, highly learned, as a high priest, or a mighty king.

John treats them tenderly, endures their weak faith till they become strong; does not reject them because they do not yet believe him so firmly.

Thus we must also deal with the consciences of those who, though out of Christ, are taken captive by the examples and rules of holy men, until they can be restored.

4 Jesus answered and said unto them, Go and shew John again those things which ye do hear and see: 5 The blind receive their sight, and the lame walk, the lepers are cleansed, and the deaf hear, the dead are raised up, and the poor have the gospel preached to them. 6 And blessed is he, whosoever shall not be offended in me.

Go, show John. Christ answers neither yes nor no, but points them to the open testimony of his works. First, because neither John nor any one else had ever done such works. Secondly, because these works had been previously foretold by the prophets. Isaiah 56:1-2; 35:4-6.

But here we must take the correct example well to heart, that Christ appeals to his works, and wishes to have the tree known by its fruit, in order to forestall all false teachers, who come in his name, and say, We are Christians; for here we have the truth. Where there are no works, there is also no Christ.

But they say, Christ commanded (Matthew 23:2-3) that we should! look to the teaching, and not to the life. Answer: It must be remarked, that teaching is also a work, yea the most important work of Christ; for among his works he enumerates also, that to the poor the Gospel is preached.

But you may say, Are there not in the gospels and in the epistles of Paul many laws, and again in the books of Moses and the prophets many promises of God? Answer: There is no book in the Bible in which both are not found; God has always placed them together. But that the New Testament is especially called gospel above other books, is because it was written after the advent of Christ, who has fulfilled the divine promise, and openly proclaimed it by oral preaching, which formerly was more concealed in the Scriptures.

The dead are raised. To raise the dead is a great miracle; but this miracle is much greater and more glorious, and yet does not have that appearance; namely, that God from eternity has ordained his Son to be a king of poor sinners, and that he should preach the gospel to them; therefore he places it as the very last and best of his works.

These poor are certainly not the beggars and bodily poor people, but the poor in spirit, who neither desire nor love earthly goods; yea, much more, who are of a poor and broken heart. No rich one can comprehend this teaching; he that would compre hend it must first become poor. Matthew 9:12.

When they raise their eyes so high and look for glory, Christ pulls them down and exalts before them the blind, and the lame, etc., and now he shows himself in a form in which no one had sought him; namely, in the form of a hospital servant, to say nothing of a king. As if he would say, Because my kingdom does not seek favors from others, but only gives favors, and is not in need of any one, therefore I can not endure those about me, who are already well, rich, strong and pious.

Not offended in me. In these words he not only confesses that it is he, against whom the world is offended, but also warns against offenses. As if he would say, Ye see, and will see and experience it more and more, that the world will be offended at my words; this I tell you before, that ye may afterwards not fall into error or temptation.

The first reason why the world is offended at the teaching of Christ is, that it will not put its trust in the grace of God, but upon its own works and merits. Secondly, the world is also offended in Christ, because he is himself so very poor and humble. In the third place, this is also a stumbling block, when the opposition to our conduct offends us more than the grace of our dear Lord Christ, proclaimed in the gospel, comforts us. The gospel is and will remain a teaching at which not only the lowly people take offense, but also the holiest, most pious, wisest and most powerful on earth, as experience teaches.

7 And as they departed, Jesus began to say unto the multitudes concerning John, What went ye out into the wilderness to see? A reed shaken with the wind?

What went ye into the wilderness to see? The other part of this gospel is a discourse, in which our Lord not only justly and highly praises John on account of his preaching and steadfastness, but also reproves the Jews for their unbelief.

And is your heart indeed like a reed? You have no certainty, but want to hear of something else than of me; for you only want to have a Christ who shall praise you as a holy people, and you look for a kingdom which is only earthly, wherein you shall have great power and honor. Do you think that John’s testimony shall also turn against me like your thoughts, and that he spake of an other, of whom you would like to hear? It is not so; John wavers not.

8 But what went ye out for to see? A man clothed in soft raiment? behold, they that wear soft clothing are in kings’ houses.

A rough garment. John wore a rough garment, and preached a hard, sharp sermon, wherein one must endure, and can not expect voluptuousness and an easy life.

9 But what went ye out for to see? A prophet? yea, I say unto you, and more than a prophet. 10 For this is he, of whom it is written, Behold, I send my messenger before thy face, which shall prepare thy way before thee. 11 Verily I say unto you, Among them that are born of women there hath not risen a greater than John the Baptist: not withstanding he that is least in the kingdom of heaven is greater than he.

A prophet. Again he praises him on account of the dignity of his office. Just as he warns, that ye shall not look for another, (v. 7,) and also not for another appearance or form, than I have, (v. 8,) so he warns you also, that ye shall look for no other time; but his testimony applies to this person, this form, and this time; and so he meets your slippery thoughts in every way and binds you firmly to me.

“Prepare thy way.” But what was lying in the way of Christ, which John was to remove? Doubtless sin; but much more also the good works of the proud saints. Had they then believed that the time had come, and taken John to be a messenger, and not a prophet, the question regarding the person and manner (of the Messiah,) could easily have been settled. Therefore it is written in Isaiah 45:6: “Seek ye the Lord while he may be found, call ye upon him while he is near.”

In this part of his discourse (v. 11- 15, ) Christ preaches especially against the third class of people (v. 9,) and extols first

The office of John. Christ extols the office of John, which is incomparably superior to the dignity of his person; for he has preached the greatest of all things; namely, that Christ is present!

But the least among them all was Christ, since during his life he ministered to all who were the least; much more was he the least on account ot his sufferings on the cross.