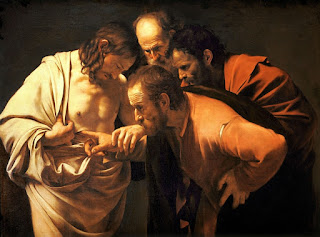 Now Thomas, called the Twin, one of the twelve, was not with them when Jesus came. 25 The other disciples therefore said to him, “We have seen the Lord.” So he said to them, “Unless I see in His hands the print of the nails, and put my finger into the print of the nails, and put my hand into His side, I will not believe.” 26 And after eight days His disciples were again inside, and Thomas with them. Jesus came, the doors being shut, and stood in the midst, and said, “Peace to you!” 27 Then He said to Thomas, “Reach your finger here, and look at My hands; and reach your hand here, and put it into My side. Do not be unbelieving, but believing.” 28 And Thomas answered and said to Him, “My Lord and my God!” 29 Jesus said to him, “Thomas, because you have seen Me, you have believed. Blessed are those who have not seen and yet have believed.”

30 And truly Jesus did many other signs in the presence of His disciples, which are not written in this book; 31 but these are written that you may believe that Jesus is the Christ, the Son of God, and that believing you may have life in His name.

24 But Thomas, one of the twelve, called Didymus, was not with them when Jesus came.

The doubting Thomas. Yes, you say, but who knows whether it is certain and sure with God, that my sins are forgiven? Rest upon what Christ says here, verses 21 and 23, and elsewhere (Matt 18:20) “Where two or three are gathered together in my name, there am I in the midst of them.”

This is a real Johannean history, who pays special attention to the miraculous works of the Lord Christ, which pertain to the doctrine of faith. And this history serves the purpose, that the resurrection of Christ is not only proved and asserted by this un believing and stubborn Thomas; but that also the power of the resurrection is known and we are benefited thereby.

But Thomas, one of the twelve, called Didymus, was not with them when Jesus came. That the Lord came just when Thomas was absent the first time, is for our instruction, both for doctrine and consolation, in order that the documentary proof of the resurrection of the Lord may be the stronger.

Except I shall see in his hands the print of the nails, etc. One might wonder at first, why the apostles have thus described their own sin and shame; and why the church afterwards so ordered, that these very histories were selected for preaching on the Apostles’ Days. But it does not especially concern us, (as it does the papacy,) to extol and honor the saints, but that we learn from them, how God is gracious and merciful and has much patience with sinners, if they do not continue in their impenitence. For in the apostles we see what a poor thing the human heart is. Among them all, it seems, Thomas was the most daring and courageous, when he said, (John 11:16) “Let us also go, that we may die with him;” then he also recently had seen, how Christ raised up Lazarus; and yet he imagines that it is at an end with Jesus. Now, he means to say, “No one shall persuade me to believe it, even though I see it, as you say you have seen him.” Here we find various sins. The first and greatest is, that he regards Christ no more than one of the other prophets who were mere men.

The second sin is, that he despises his fellow disciples as fools, and regards himself only as wise.

The third sin is, that he thinks Christ must do for him just what he wants, or he will not regard him.

Yea, the dear apostle will himself be lost and condemned, in that he will not believe. For in the article of the resurrection of Christ lies all the power of faith and eternal life. 1 Cor. 15:14, 17-18.

Thus the Holy Ghost shows us in this example, how unspeakably great is both the obduracy and the timidity of the human heart.

26 And after eight days again his disciples were within, and Thomas with them: then came Jesus, the doors being shut, and stood in the midst, and said, Peace be unto you. 27 Then saith he to Thomas, Reach hither thy finger and behold my hands; and reach hither thy hand, and thrust it into my side: and be not faithless, but believing.

Chirst’s appearance to Thomas. Now, what does Christ do with the poor unbelieving man? He does not delay long, but on the eighth day after his resurrection, when Thomas had strengthened himself in his unbelief, and was almost dead, and no one hoped that Christ would show himself to him specially, he appears to the disciples again and at the same time to Thomas also, and says: Peace be unto you; comprising in this word also the poor, great sinner, Thomas, that he may have a joyful heart.

“Reach hither thy finger, and be hold my hands, and reach hither thy hand, and thrust it into my side,” (favoring him so much more that he not only should see, as the others had seen, but also touch and feel him, as he had said,) only that you be no longer “faithless, but believing.” These things are written for our sake, that we should learn how Christ loves us, and how friendly, paternally, kindly, and mildly he treats us, and will continue to treat us. It may be that he has retained the same signs and marks, which perhaps will shine much brighter and  more glorious than his whole body, and that he will exhibit them before the whole world, as the Scripture says, “They shall look upon him whom they have pierced.” But that the Lord shows his hands and his feet, he thereby gives us to understand, that his works and no others belong to salvation, for by hands and feet the Scriptures understand the works and conduct. But should any one ask, My dear friend, you speak much of faith, and that our salvation depends entirely upon it, may I ask you, how can we obtain faith? I will tell you. Our Lord Christ has said, “Peace be unto you! Behold my hands, etc.” Behold, O man, I am the only one who hath taken thy sins away, and hath redeemed thee.

28 And Thomas answered and said unto him, My Lord and my God.

My Lord and my God. This is an excellent word. Thomas is not intoxicated, does not speak sarcastically or jestingly, nor does he mean a false god; therefore he certainly does not lie. Thus he is enlightened by the power of the resurrection of Christ, so that he now certainly believes and confesses that he is his Lord, true God and man, through whom, as he himself now also rose from unbelief — the head fountain of all sins — so he shall arise from death at the last day and live with Christ, in unspeakable glory and blessedness.

29 Jesus saith unto him, Thomas, be cause thou hast seen me, thou hast believed: blessed are they that have not seen, and yet have believed.

Blessed are they that have not seen and yet believe. Mark well and diligently this saying, not only on account of the adversaries, who call it heresy, when we preach that we must be saved by faith only; but also for your own sake, that you may know how to obtain salvation.

30 And many other signs truly did Jesus in the presence of his disciples, which are not written in this book: 31 But these are written, that ye might believe that Jesus is the Christ, the Son of God; and that believing ye might have life through his name.

These signs were done that ye might believe, etc. Such faith must not be a mere dead opinion of the history concerning this Jesus, but one which concludes and is certain that he is the Christ; that is, the promised King and Savior, the Son of God, through whom we are all redeemed from sin and eternal death.

Through his name; that is, not by the law, or our own worthiness, or works; but alone through and on account of his merits, (See Acts 4:12) “For there is no other name under heaven given among men, whereby we must be saved!”

The resurrection the most important article of faith. It is a fundamental article, because it is the highest and most important, and should therefore remain certain and firm, together with other articles on which our salvation depends. For this article has met with and still meets with the most opposition, and is the most difficult to believe. But upon such testimony, the heart of every Christian should leap with joy, and certainly and without doubt believe that Christ arose from the dead on the third day. For Pilate, the governor, and Caiaphas, the high priest, and all the people of Jerusalem, together with King Herod, are witnesses on the one side; then the apostles testify on the other side, and their testimony goes through the whole world. Thirdly, the work testifies for itself; and lastly, the Holy Scriptures testify. On this we can certainly confide, and need no further special revelation.