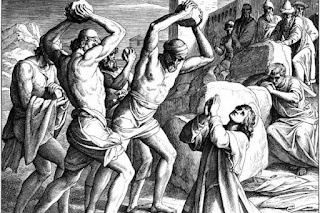 34 Therefore, indeed, I send you prophets, wise men, and scribes: some of them you will kill and crucify, and some of them you will scourge in your synagogues and persecute from city to city, 35 that on you may come all the righteous blood shed on the earth, from the blood of righteous Abel to the blood of Zechariah, son of Berechiah, whom you murdered between the temple and the altar. 36 Assuredly, I say to you, all these things will come upon this generation.
37 “O Jerusalem, Jerusalem, the one who kills the prophets and stones those who are sent to her! How often I wanted to gather your children together, as a hen gathers her chicks under her wings, but you were not willing! 38 See! Your house is left to you desolate; 39 for I say to you, you shall see Me no more till you say, ‘Blessed is He who comes in the name of the LORD!’”

I send unto you prophets. This is a hard Gospel against the persecutors of the faith; yet the harder it is against them, the more comforting it is for the faithful who are persecuted. And this Gospel teaches what stubborn things are the natural light, self-conceit and reason.

Woe! Hitherto (verses 13-33) the Lord has cried woe (eight times) against the Pharisees and preached to them, giving them sharp maledictions; now he closes his maledictions, for he intends to leave them.

Prophets. Those are here expressly called prophets who received the word immediately from God, and preached from pure inspiration of the Holy Ghost, who did not receive it from books or the works of men; as also the apostles received it.

Wise men are those who have not only received their wisdom from God, but who have received it from writings and men that were taught by the prophets.

Scribes, or writers, are those who have gained their knowledge from the writings of the apostles (who taught by means of writings and books, where they could not be personally present.)

These, now, are the three ways by which the truth may be revealed: writing, words, thoughts. But the Lord does not condemn the office of the scribes because there are so many bad men in it; and Christians should thank God and acknowledge the grace that he has opened the market of his grace before our doors; namely, Baptism, the Eucharist and the pulpit.

Kill and crucify. Some dispute over these words; but all Christians are not killed or crucified, or even persecuted. Yet those who do not actually do this, but take pleasure in those who do so, are equally guilty. Romans 1:32.

On you come all the righteous blood. This is certainly terrible, that it should mean a murder of the whole Christian Church. Why? Because all saints are one body, and the kingdom of Christ on earth is one thing.

There is a great difference between the blood of a righteous man that is shed, and the blood of another man. When one peasant kills another then his murder goes no further than his own blood. But here the blood of the righteous from the beginning of the world to the end of the world, comes upon him who kills a Christian.

But why does he refer to only these two, Abel and Zacharias? although Zacharias was not the last one whose blood was shed. To this may be replied:

1. That here Christ follows the usage of the Scriptures, and gives us an example to show that we should say, maintain or introduce nothing that is not clearly taught in the Scriptures; for in the Holy Scriptures no one is so expressly mentioned as having been slain like he was.

2. Those who murdered Jeremiah and others did not act so outrageously as Joash.

Jerusalem which killest the prophets. This Jerusalem was far above Rome, for there were holy people and God’s order. For God said: Thou shalt be my city, therein will I dwell. Here you see the only mark of a Christian church, which consists in following and obeying the divine word. When that is gone they may continue to boast, Church, Church, yet there is nothing back of it.

The Lord acts here like people who are angry at those who are guilty of ingratitude, and in the most vehement and heartfelt manner holds up his goodness and benefits to the Jews. O man, mark well the words and the comparison, how in great earnestness and from his whole heart he expresses himself; in this picture you can see how you ought to behave towards Christ, and wherein he is useful to you, how you shall use and enjoy him. You shall creep under Christ’s own righteousness, humble yourself and yield to him. But he scratches in the Scriptures, entices us to come in, gives us to eat, spreads his wings over us with all his righteousness, merit and grace, and takes us so kindly in under himself, warms us with his natural warmth; that is, with his Holy Spirit, who comes only through him, and fights for us against the devil in the air.

How can anyone resist his will? Whoever would speak higher of this, whether one could resist God’s will, would need a higher understanding. When we enquire concerning the secret hidden will of God, the questions grow the longer and the more in number, until there are more of them than sand on the sea shore.

Home left desolate. That is, it shall be robbed of the divine Word and Sacraments, and then be filled with devils, abominations and idolatry; as is usually the case when God with draws his Word and work from a place. It was done unto them as they desired. Psalm 109:17; Isaiah 5:5-6.

Blessed is he that cometh in the name of the Lord. No prophet came to this people any more. They still read the prophets, and Moses still leads them out; but they stick fast in the delusion that the Messiah has not yet come.

This text he quotes from Psalm 118:26, and applies it to himself. Now this would be great blasphemy if he were not natural and true God. He who will not believe and sing, “Blessed is he that cometh in the name of the Lord,” shall know nothing of it; but if thou believest thou shalt see it.