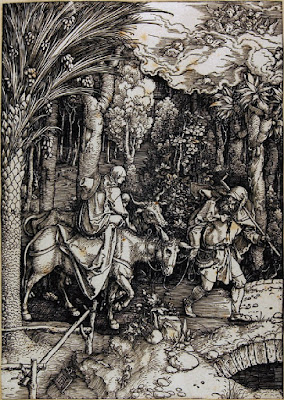 13 Now when they had departed, behold, an angel of the Lord appeared to Joseph in a dream, saying, “Arise, take the young Child and His mother, flee to Egypt, and stay there until I bring you word; for Herod will seek the young Child to destroy Him.”

14 When he arose, he took the young Child and His mother by night and departed for Egypt, 15 and was there until the death of Herod, that it might be fulfilled which was spoken by the Lord through the prophet, saying, “Out of Egypt I called My Son.”

16 Then Herod, when he saw that he was deceived by the wise men, was exceedingly angry; and he sent forth and put to death all the male children who were in Bethlehem and in all its districts, from two years old and under, according to the time which he had determined from the wise men. 17 Then was fulfilled what was spoken by Jeremiah the prophet, saying:

18“A voice was heard in Ramah,
Lamentation, weeping, and great mourning,
Rachel weeping for her children,
Refusing to be comforted,
Because they are no more.”

22 But when he heard that Archelaus was reigning over Judea instead of his father Herod, he was afraid to go there. And being warned by God in a dream, he turned aside into the region of Galilee. 23 And he came and dwelt in a city called Nazareth, that it might be fulfilled which was spoken by the prophets, “He shall be called a Nazarene.”

13 And when they were departed, behold, the angel of the Lord appeareth to Joseph in a dream, saying, Arise, and take the young child and his mother, and flee into Egypt, and be thou there until I bring thee word: for Herod will seek the young child to destroy him.

When they were departed. The an gel could have warned Joseph previously, three or more days before; but our Lord God let it come to the last extremity, when there can be no longer delay.

Child and mother. The angel does not say, Take the child, whose father thou art, but take the child and his mother; give the child into the care and protection of his mother only. (Matthew 1:20) .

But why did Christ do this, and expose himself to so much trouble and misfortune? Why does he not rather avail himself of his divine power, or the protection and help of the angels, who could easily have removed Herod? Answer: The Holy Scriptures thereby present to our view the Lord, as a natural man, who was like unto us in all things, sin only, excepted, as St. Paul says in Philippians 2:7.

But here we also see that, although God permits his church to be afflicted, yet we must confess that he truly and faithfully stands by her. Thus God has arranged it through the wise men, that they should provide the necessary means for the Child’s support in his flight into Egypt. (see verse 11.) That was doubtless no mean present. Thus God will constantly stand by his word and his church. Though tyrants may rage, they must still let his Church and the Word remain ; yea more, their rage and persecution shall be the means of increasing the Church and spreading the word of God still farther. There is no doubt of this. Doubtless Mary and Joseph spoke to others of the great wonder connected with this Child, and brought them to faith and salvation.

16 Then Herod, when he saw that he was mocked of the wise men, was exceeding wroth, and sent forth, and slew all the children that were in Bethlehem, and in all the coasts thereof, from two years old and under, according to the time which he had diligently inquired of the wise men.

Herod was exceeding wroth. But no doubt Herod tried to put a plausible appearance on the affair: “We must prevent uproar and blood-shed; it is better that a few hundred mothers and fathers should be distressed, than that the whole country should be turned into confusion and uproar.”

Two years old and under. In such innocence these little children are put to death; this can bring them no harm, but on the contrary a double gain and advantage. They would have had to die at any rate, but now it happens that they die not on account of their nature or their sins, but for Christ’s sake. Of such it is said, “Precious in the sight of the Lord is the death of his saints.” Psalm 116:15.

18 In Rama was there a voice heard, lamentation, and weeping, and great mourning, Rachel weeping for her children, and would not be comforted, because they are not.

Rachel weeping for her children. St. Matthew quoted this verse from Jeremiah 31:15, especially to indicate how it always fares with Christianity. For it always has the appearance before the world, as though Christianity were a failure; yet God wonderfully sustains his church against all the powers of hell. And we see here in the case of these children, how Christianity is displayed in suffering.

19 If But when Herod was dead, behold, an angel of the Lord appeareth in a dream to Joseph in Egypt,

But when Herod was dead. But what is finally the fate of the tyrant Herod? He made short work with the poor innocent children; but on the other hand, God imposes a loathsome disease upon him, insomuch that no one could remain near him. And this was but a trifle to what the tyrants will have to endure in perdition.