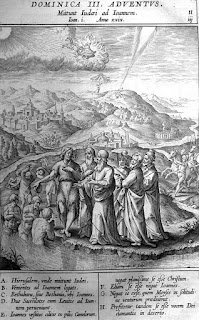 Now this is the testimony of John, when the Jews sent priests and Levites from Jerusalem to ask him, “Who are you?” 20 He confessed, and did not deny, but confessed, “I am not the Christ.” 21 And they asked him, “What then? Are you Elijah?” He said, “I am not.” “Are you the Prophet?” And he answered, “No.” 22 Then they said to him, “Who are you, that we may give an answer to those who sent us? What do you say about yourself?” 23 He said: “I am

‘The voice of one crying in the wilderness:
“Make straight the way of the LORD,”’
as the prophet Isaiah said.” 24 Now those who were sent were from the Pharisees. 25 And they asked him, saying, “Why then do you baptize if you are not the Christ, nor Elijah, nor the Prophet?” 26 John answered them, saying, “I baptize with water, but there stands One among you whom you do not know. 27 It is He who, coming after me, is preferred before me, whose sandal strap I am not worthy to loose.” 28 These things were done in Bethabara beyond the Jordan, where John was baptizing.

19 And this is the record of John, when the Jews sent priests and Levites from Jerusalem to ask him, Who art thou?

Who art thou? This is a great temptation to John the Baptist to fall away from the truth. For those who were sent to him were men of the highest, noblest class, priests and Levites, who offer him the highest honor. But why do they not come to him themselves? Because they did not offer him this honor out of good motives, but that by the friendship and honor of this great man they themselves might become great and honored, before all the people. (John 5:35) Neither did they believe in their hearts that he was Christ or Elias or a prophet, or they would have come themselves and permitted themselves to be baptized, as the others did. Therefore also they do not ask what he preaches and teaches; but inquire only about his person, authority, power and respect.

20 And he confessed, and denied not; but confessed, I am not the Christ.

He confessed and denied not. The Evangelist describes with many words the testimony of John; for though it would have been sufficient, if he had simply written, “He confessed;” yet he repeats it yet once more and says, “He denied not, but confessed.” Doubtless he thereby praises the noble firmness of John, which he maintained in the great temptation. What he confesses is the confession of Christ; but what he does not deny, is that he acknowledges what he himself is.

21 And they asked him, What then? Art thou Elias? And he saith, I am not. Art thou that prophet? And he answered, No.

What art thou? The Jews derived the prophecy of Elias from Malachi 4:5, that he was to come before the day of the Lord; but they erred in this, that they understood it as of the first bodily Elias, and not of a prophet, who should come in the spirit and power of Elias; that is, in the manner and deeds of Elias, as described in Luke 1:17.

Art thou an ordinary prophet? (Compare Matthew 11:9; 21:26) “And he answered, No.” For in the first place, he did not wish to draw the people to himself, as the prophets usually led and taught the people in times of necessity and when they were asked for advice and help; but he wished to lead the people to Christ. In the second place, he denied that he was a prophet, because a prophet foretells the coming of Christ, but John points out the present Christ.

22 Then said they unto him, Who art thou? that we may give an answer to them that sent us. What sayest thou of thyself? 23 He said, I am the voice of one crying in the wilderness, Make straight the way of the Lord, as said the prophet Esaias.

The voice crying in the wilderness, He will say, I prophesy of the Lord not as a prophet, but I call as a forerunner, that the way may be prepared by which he shall come. By the “crying voice,” the office of the ministry of the New Testament, the gospel, is represented, which is not a dead letter, like the law, but it shall be a living voice.

24 And they which were sent were of the Pharisees. 25 And they asked him, and said unto him, Why baptizest thou then, if thou be not that Christ, nor Elias, neither that prophet?

Why baptizest thou then? Here comes the second thrust, by which John is tempted from the left side; for when they could not move him by persuasion, they attack him by threatenings. And here their false humility shows itself to be a boundless pride. They would have acted in the same way, if John had obeyed them, after they had become tired of him. Hence, learn to beware of men, especially when they make pretensions of friendship and meekness. Matthew 10:16f.

26 John answered them, saying, I baptize with water: but there standeth one among you, whom ye know not;

I baptize with water. That is, I have a sign of my preaching with me, like the other prophets. (Compare Jeremiah 27:2; Isaiah 20:2) I wash and baptize you for a sign, that you are unclean and polluted, and must let yourselves be cleansed. But I do not baptize you on myself, or that I could cleanse you, but on him whom I preach, that it is he who shall baptize you with the Holy Ghost (which the Evangelist, it is true, omits, but yet lets it be sufficiently understood,) and that my baptism with water has its value and power for his sake. For of John’s baptism this also must be known, that it was not a mere sign, but such a sign, whereby they should be awakened to believe on Christ.

27 He it is, who coming after me is preferred before me, whose shoe’s latchet I am not worthy to unloose.

He was before me. Not only personally or according to his essence, but also according to his office and power. That John meant this by these words, and wished to extol the divine glory of this person, he gives us clearly to understand by these words, “Whose shoe’s latchet I am not worthy to unloose.” Therefore he casts his own holiness at the feet of this man.

Now, this is the other office of John, and also that of every evangelical preacher, that he should not only represent all the world as sinners, but that he should also comfort and show how we can be saved from sin, by pointing us to him who was to come.

28 These things were done in Bethabara beyond Jordan, where John was baptizing.

These things were done in Bethabara. So very diligently does the Evangelist describe the testimony of John, that he even mentions the place where it was given; for very much depends on the testimony by which Christ is confessed, and there are many offenses.