Circumcision and Name of Jesus 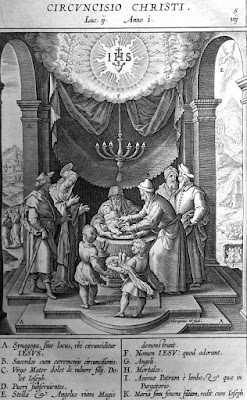 21 And when eight days were completed for the circumcision of the Child, His name was called Jesus, the name given by the angel before He was conceived in the womb.

The circumcision of Christ. With the eighth day it is meant that the Jewish circumcision should continue no longer than the law; that is, to the time of Christ, who has made an end of the law; for the Scripture keeps this order, that after six days is the Sabbath, and the day following the Sabbath is the eighth day, when a new week begins.

Circumcision, like baptism, the Lord’s Supper, and adoration of the crucified one, is a humiliation of the haughty nature and reason of men, since it seems to them a ridiculous, senseless and unnecessary command. Now circumcision means nothing else than the cutting off of all that the fleshly birth brings with it. For the spiritual significance of circumcision is this, that there is a lack, not only in the fingers, hand, foot, ears, or any other member of the body; that is, of works, but in the whole disposition of nature, that its birth and all its descent is sin ful; as also the circumcision had to be performed on the eighth day, when the poor child had not yet committed any actual sin.

But this spiritual circumcision hurts and is very painful; just as the other (bodily) brought with it shame and pain. Thus this also must bring the same; it must hurt, the Old Adam must submit and come to shame.

The difference. But we must make a vast difference between the circum cision of Christ and that of the Jews, as wide as between heaven and earth. For, for his own person our dear Lord had no need of it. He does it for our sake, for we needed such a man, who was without sin, and who fulfilled the law and also appeased the wrath of God. For this reason he subjects himself to the law, bestows this vic tory upon us, which he obtained by the law, that we might use and enjoy it, and henceforth have all that right to the law through him, which he has to the law, that it may henceforth no more condemn us nor hold us in bond age.

His name was called Jesus. The last part in the circumcision is, that the child receives a name. Before a man is circumcised and by faith puts off the Old Adam, he has no name before God. (Matthew 25:12) But he has a name before God, who is circum cised in spirit. Romans 2:29.

Named by the angel. But that he was named Jesus by the angel before he was conceived in the womb, serves this purpose, that every one may know that it is such a name which is pleasing to God, since God himself has called his Son by that name. Let us learn and mark with diligence, that this child is called Jesus, and is a Savior, who came to redeem us from the deepest and greatest distress; namely, from sin, and not from the inferior need and temptation which this life brings with it.