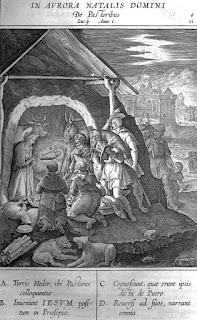 So it was, when the angels had gone away from them into heaven, that the shepherds said to one another, “Let us now go to Bethlehem and see this thing that has come to pass, which the Lord has made known to us.” 16 And they came with haste and found Mary and Joseph, and the Babe lying in a manger. 17 Now when they had seen Him, they made widely known the saying which was told them concerning this Child. 18 And all those who heard it marveled at those things which were told them by the shepherds. 19 But Mary kept all these things and pondered them in her heart. 20 Then the shepherds returned, glorifying and praising God for all the things that they had heard and seen, as it was told them.

The faith of the shepherds. The first article is the faith of the shepherds; namely, the divine faith. Human faith cleaves to the person, believes and honors the word for his sake who speaks it; but the divine faith clings to the word, which is God himself; for he feels its truth so inwardly, that no one can tear him away from it any more. (John4:42) All who believed on Christ on account of his person and miracles forsook him when he was crucified. But the shepherds do not say, Let us go and see the word which the angel has proclaimed to us, but that which the “Lord hath made known to us.”

The second article is the unanimity of spirit when they say, “Let us go.” For this is the manner of Christian faith, that it unifies the hearts. Psalm 133:1; Romans 12 ; 1 Corinthians 12; Ephesians 4:3.

Let us now go and see this thing. So they talk with one another, joyfully and friendly with many words. Herein the joy manifests itself, when one cheerfully speaks and hears what faith hath received in the heart.

The fourth part is love to the neighbor, self-denial and humility. This is manifested by the shepherds who forsake their flocks and go, not to the high, great lords of Jerusalem, not to the councilmen in Bethlehem, but to the poor people in the stable; they come to and associate with the lowly.

Made known abroad. They publicly preach the word, which is the highest work in the Christian life. For to believe right and to live well, secretly and by himself, is not attacked so hard by the evil spirit; but when one undertakes to preach the Gospel to others also, this he can not endure.

All that heard it wondered at these things. With the most of them perhaps the wonder did not last long. For experience teaches that the greater part of mankind are such miserable, corrupt people, that whether God does us good or evil, whether he scourges us, or shows us his grace, it is soon forgotten when it is over.

But Mary kept all these things and pondered them in her heart. Mary acts like those who keep, search and abide in the word of God, and the longer they do so, they find in it the greater understanding and comfort, and from day to day become more confident in their faith.

The shepherds returned to their flocks, have a coat and crook as before, remain shepherds, make no change in their outward life, do not retire into a desert, and change no outward occupation; for Christian liberty is bound to no particular work, but all occupations are alike to the Christian as they are committed to him. The true change, which Christ came to produce, is that a man may become changed inwardly in heart. Therefore also the shepherds did no more than “praise and glorify God.” For we can give nothing in return to God for his goodness, but the praise and thanksgiving which comes also from the heart.

In this Gospel we see how the Christian life appears outwardly before the people as nothing or very little, but inwardly it is pure light, joy and blessedness. Galatians 5:22.